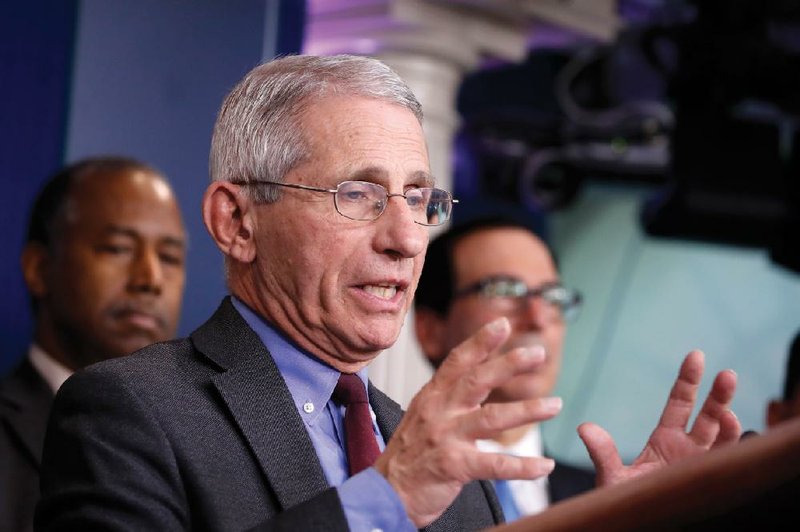 Dr. Anthony Fauci is simultaneously advocating containment to try to keep the virus from spreading, mitigation to check its damage once it gets loose in a community, immediate efforts to increase testing, and short-term and long-term science to develop treatments and vaccines. More photos at arkansasonline.com/315fauci/. (AP/Alex Brandon)

WASHINGTON -- As the coronavirus has upended daily life across the globe, Dr. Anthony Fauci has become the trusted voice in separating fact and fiction.

Fauci's political bosses -- from former President Ronald Reagan to President Donald Trump -- have let him do the explaining because people see him as frank and understandable, translating complex medical information into everyday language while neither exaggerating nor downplaying.

If a person quizzed former presidents about who influenced their views on infectious diseases, "Tony's name would be first on the list, and you wouldn't have to remind them," said former health secretary Mike Leavitt, who worked with Fauci on bird flu preparedness.

At 79, the government's top infectious disease expert is by age in the demographic group at high risk for covid-19. But he's working round the clock and getting only a few hours of sleep. He's a little hoarse from all the talking about coronavirus, and he'll be on the TV news shows today. Yet his vigor belies his age, and he credits it to exercise, including running.

As of Thursday, he had not been tested for coronavirus. The National Institutes of Health, where he works, said that's because he hasn't needed to be.

So he's simultaneously advocating containment to try to keep the virus from spreading, mitigation to check its damage once it gets loose in a community, immediate efforts to increase testing, and short- and long-term science to develop treatments and vaccines.

He's hoping a dynamic response will put the nation where the puck ends up going.

"It's unpredictable," he said. "Testing now is not going to tell you how many cases you're going to have. What will tell you ... will be how you respond to it with containment and mitigation."

Fauci's approach to the coronavirus has won the respect of Democratic and Republican lawmakers, along with Trump administration officials.

Almost in matter-of-fact fashion, Fauci acknowledged to Congress in recent days that the government system wasn't designed for mass testing of potential infections. "It is a failing, let's admit it," he told lawmakers.

But he supported President Donald Trump's restrictions on travel from Europe. It's part of the containment strategy, he said.

"It was pretty compelling that we needed to turn off the source from that region," he said.

The threat of a pandemic has been on Fauci's mind for years. Many scientists thought it would come from the flu, but it turned out to be coronavirus.

Fauci was seen as unflappable while answering questions from the House Oversight and Reform committee for hours last week -- except if there was any hint of questioning his scientific integrity.

"I served six presidents and I have never done anything other than tell the exact scientific evidence and made policy recommendations based on the science and the evidence," he said.

Democrats and Republicans have welcomed his approach.

"The scientists I've spoken with in committee see you as the lead man, and I believe most of America does," Rep. Clay Higgins, R-La., told Fauci.

Democratic Rep. Stephen Lynch of Massachusetts praised Fauci for accurately stating that a vaccine would not be available in a matter of months.

"You have a certain level of credibility and honesty that I think ... should be persuasive to the American people," Lynch told him.

Fauci was born in Brooklyn, N.Y., on Christmas Eve 1940, into an Italian-American family. Former President George W. Bush, who in 2008 awarded Fauci the Presidential Medal of Freedom, noted that even as a boy he showed an independent streak: In a neighborhood full of Brooklyn Dodgers fans, Fauci rooted for the Yankees.

Fauci became head of the National Institute of Allergy and Infectious Diseases in 1984, when the nation was in the throes of the AIDS crisis. He's recalled the huge frustration of caring for dying patients in the NIH's hospital with nothing to offer.

After hours, he'd chat with then-Surgeon General C. Everett Koop about what scientists were learning about AIDS, influencing Koop's famous 1986 report educating Americans about the disease.

In 1990, when AIDS activists swarmed the NIH to protest what they saw as government indifference, Fauci brought them to the table. Fast forward, and he helped to shape Trump's initiative to end HIV in the U.S.