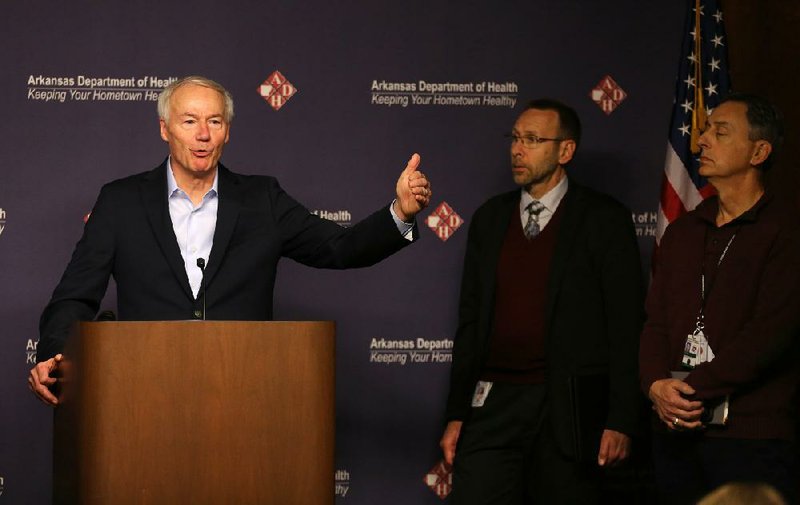 Gov. Asa Hutchinson announces three new coronavirus cases Saturday at a news conference at the Health Department. Hutchinson said he has activated the state emergency operations center and the Arkansas National Guard to help with logistics and transportation and to help the Health Department answer calls from health care providers and the public. With the governor are Dr. Nate Smith (middle), state secretary of health, and A.J. Gary, state homeland security adviser. (Arkansas Democrat-Gazette/Thomas Metthe)

SUNDAY UPDATE: The total number of cases has increased from 12 to 16, the Arkansas Department of Health reported Sunday.

Three more Arkansans have tested positive for the coronavirus, raising the total number of people in the state known to be infected to 12, Gov. Asa Hutchinson announced Saturday.

All three people most recently identified as having the virus are workers at Jefferson Regional Medical Center in Pine Bluff who had cared for the state's first identified coronavirus patient in the hospital's intensive care unit, officials said.

The workers, along with others who had contact with the patient, had been placed on home quarantines after the patient tested positive Wednesday. They were tested after they developed symptoms.

That person recently returned with another person from a foreign country that has an outbreak of covid-19, the illness caused by the virus. Both members of the couple had previously been under monitored isolation at their home after testing positive.

Two of the other people in the state with covid-19 were also in hospitals Saturday after being admitted earlier -- the one at Jefferson Regional Medical Center and a Little Rock resident who is at UAMS Medical Center.

The others who have tested positive are being kept isolated at their homes. Smith declined to say Saturday where the Jefferson Regional Medical Center workers live.

Of the other nine people who have tested positive, five live in Jefferson County and the others live in Pulaski and Saline counties, officials have said.

[Video not showing up above? Click here to watch » https://www.youtube.com/watch?v=GryGz0IagGA]

More than 200 other people are being kept under home quarantines because they came in contact with someone who tested positive or recently returned from a country that has an outbreak of covid-19, and 26 people were being tested. Tests of 65 other people have come back negative.

Jennifer Dillaha, the department's medical director for immunizations and outbreak response, said the department is no longer monitoring new arrivals from other countries but is asking them to quarantine at home for 14 days after returning to the state.

Hutchinson said he has activated the state emergency operations center and activated the Arkansas National Guard to help with logistics and transportation, and to help the Health Department answer calls from health care providers and the public.

"As we identify cases outside of the Central Arkansas area, we will refocus our efforts and adjust according to the risk," he said.

The lack of testing capacity is an obstacle affecting states across the country, Hutchinson said.

"What we're most concerned about is what we do not know," the governor said. "What is very logical is happening is that there are other cases out there that we're just not able to confirm as positive because of limited testing capacity."

In addition to the three Jefferson Regional Medical Center workers whose infections were announced Saturday, a University of Arkansas for Medical Sciences residency doctor who cared for the patient is among those in the state who have tested positive.

Smith said the intensive care unit "is a setting where it's particularly high risk because the patient is very ill, a lot of aerosols being generated, and so it's the time when health care workers are at greatest risk."

UAMS Chancellor Cam Patterson, a cardiologist, has said the patient didn't initially have a fever or symptoms that were consistent with covid-19.

"Personal protective equipment, consistently used, is effective, but there was a period of time before covid-19 was suspected for this patient," Smith said Saturday.

The equipment is in short supply in the state, with a shipment from the U.S. Department of Health and Human Services' Strategic National Stockpile expected this week.

"What we are facing are national challenges that I know that the vice president's office, the [Centers for Disease Control and Prevention] are working diligently to address," Hutchinson said.

Since the hospitalized Pine Bluff patient tested positive Wednesday, the virus has prompted a wave of school and event closures in Arkansas, including a two-week closure of public schools in Pulaski, Saline, Jefferson and Grant counties, where those who tested positive live, go to school or have family members.

Hutchinson on Friday recommended against holding gatherings of more than 200 people in that area and said people elsewhere should use their discretion in deciding whether planned events should go forward.

The Central Arkansas Library System, which earlier had canceled its programs and events through the end of this month, on Saturday closed all of its locations through March 23.

The virus, which first emerged late last year in Wuhan, China, spreads through respiratory droplets emitted when people sneeze or cough. Symptoms of covid-19 include fever, cough and shortness of breath.

While doctors can submit coronavirus test specimens to large national laboratories such as Quest Diagnostics in Secaucus, N.J., or LabCorp of Burlington, N.C., "that testing has a protracted turnaround time, and it's necessary for us to figure out how we can increase the number of tests that can be done rapidly here within Arkansas," Patterson said.

He said he's hoping for the arrival within about a week of a machine from GenMark Diagnostics in Carlsbad, Calif., that would allow UAMS to test 144 patients a day. The test will then take four or five days to validate, Patterson has said.

UAMS spokesman Leslie Taylor said the hospital is also hoping to get two more of the machines, which cost $210,000 each.

She said the first machine is scheduled to arrive Thursday.

"The question is whether or not we'll get test kits with that," she said.

Smith said at least one other hospital in the state has also ordered testing equipment.

"There's obviously a great deal of demand for these machines nationwide, but our need is a critically important one," Patterson said.

Once it can start testing, the hospital will work with the Health Department "to determine how we triage this testing for anybody in the state," Patterson said.

Right now, the state's testing criteria is narrowly defined "so that it can match our lab capacity," Hutchinson said.

"As we have more testing capacity, then we will broaden the criteria," he said.

Patterson said another need among health care providers is for "worried well" people to stay home, rather than crowd clinics and hospital emergency rooms.

Through its website, UAMS has screened 146 people for covid-19 since it began offering the free service last week. The free service is available at uamshealth.com/healthnow.

UAMS also set up a hotline Friday to answer questions about the virus. The hotline number is (800) 632-4502. It received 150 calls within four hours Saturday morning, Taylor said.

Meanwhile, a doctor and nurse at a drive-thru clinic set up by the hospital Thursday had seen 146 patients as of Saturday, she said.

To protect health care workers and patients, health officials have advised people with respiratory symptoms to call ahead before visiting a doctor's office or emergency room so that appropriate precautions can be taken. Bledsoe said hospitals should also consider setting up clinics in the parking lots or other areas to triage patients.

"We're very concerned that in short order we're going to have a significant spike in volume, and that, with the transmission of the disease to our health care workers, could potentially lead to problems."