Luxury back on Chinese's shopping lists 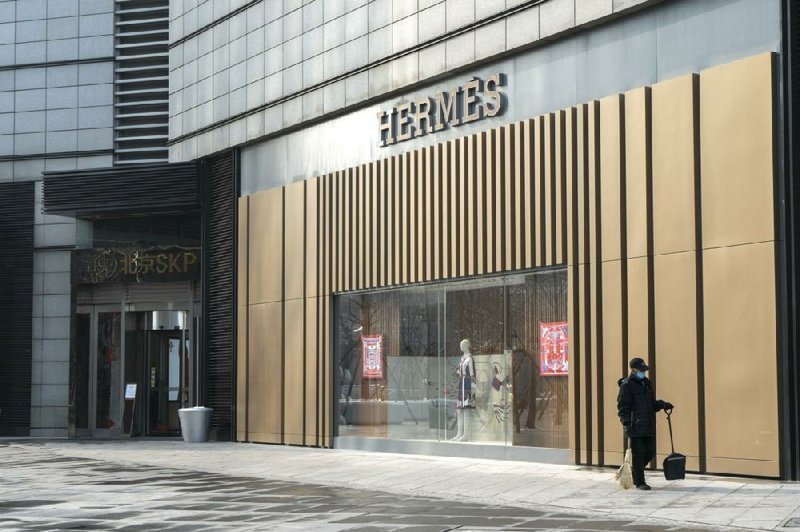 A cleaner walks past a Hermes International SCA store in Beijing.

Chinese shoppers are slowly returning to the glitzy malls and boutiques where they've been driving growth of the global luxury industry as coronavirus quarantine measures relax.

Store traffic in China is creeping back up after falling as much as 80% at the virus outbreak's peak there earlier this winter, hammering sales of brands ranging from Burberry Group Plc to Kering SA's Gucci. The recovery could accelerate in the coming weeks, fueled by "revenge spending" sprees.

Amrita Banta, managing director at Agility Research, used the term -- previously coined to describe pent-up Chinese consumer demand that was unleashed in the 1980s after the chaos and poverty of the Cultural Revolution -- to describe buying by luxury clients whose pockets are flush with cash after weeks of canceled plans.

"China seems to have turned the corner and bigger cities are showing cautious optimism," she said. "We see a slow but definite bounce-back."

Chinese shoppers made up more than one-third of the luxury industry's sales and about two-thirds of its growth in recent years. When Beijing imposed lockdowns in late January to stem the spread of the coronavirus, sales ground to a halt just as the key Lunar New Year vacation period was getting started.

What had previously seemed like a disastrous first quarter for the industry is poised to turn into a poor first half, as luxury hubs like Italy ramp up their own quarantine measures and the virus spreads in major markets like the U.S.

Even as the virus spreads globally, there are signs that China's own outbreak is coming under control. The country reported only two dozen new cases of the disease on Wednesday, down from hundreds or thousands per day a few weeks ago. And luxury brands such as Hermes International are reopening shops.

"We see a slow improvement in the business in China," said Micaela Le Divelec Lemmi, chief executive at Salvatore Ferragamo SpA. "On top of the traffic, the mood of the Chinese customers will also be relevant. After a month and a half of closures and restrictions, there is a will to come back and have a real life."

Andy Li, who works in financial technology, agrees. The 29-year-old has already gone to the Maoye mall, in the northern Shanxi province, three times since quarantine measures eased two weeks ago. The mall, which houses brands including Kering's Gucci and Bottega Veneta, checks shoppers' temperatures before allowing them to enter. Guests also must wear masks.

"I was trapped in my home for an entire month," Li said. "Our residential compound was chained up, and we were not allowed to go anywhere. Now I feel somewhat free again."

He tried shopping more online during the quarantine, but said the products he ordered got stuck in customs during logistics delays.

Hermes says it has reopened all but two of its stores in mainland China, after closing 11 locations when quarantine measures were at their peak. Chow Tai Fook Jewellery Group Ltd., the world's biggest jeweler by sales, said about 85% of its more than 3,600 Chinese stores resumed operations last week.

At a luxury mall in Hangzhou last week, customers lined up to enter a Chanel boutique.

Flight cancellations and restrictions on sales of package tours have made it harder for Chinese tourists to travel internationally, which could accelerate a shift to buying more at home rather than on shopping trips abroad. That trend already had taken hold as lower import duties and taxes made local shopping more attractive.

It's unlikely that revenge spending will make up for all of the lost sales. The outbreak is likely to reduce industry sales by as much as $45 billion in 2020, according to the survey of 28 top executives undertaken by Boston Consulting Group and Sanford C. Bernstein. And not everyone will be racing back to the mall as quarantine measures relax.

"It all comes down to the confidence of the consumers," said Jason Yu, managing director at Kantar Worldpanel Greater China. Many people who work in the service sector or run smaller companies saw their incomes damaged by the epidemic, he said, and might be more likely to weed out nonessential spending from budgets.

While the number of officially confirmed new cases in China has slowed sharply, there's a risk that infections could rise again now that more people are resuming activities. Travelers could spark new outbreaks by carrying the virus back to China from abroad. The economic impact of measures such as President Donald Trump's restrictions on travel to the U.S. from Europe also could dampen a potential recovery.

Despite the grim first quarter -- with revenue seen falling between 25% and 33% worldwide -- Ferragamo still expects sales growth in China this year, but only if the coronavirus's impact continues to fade. The Florence, Italy-based brand said it's cutting production and suspending all investments "not considered fundamental."

With limited visibility, Le Divelec Lemmi said, "Like all our competitors, we have to live on a 24-hour basis."

Information for this article was contributed by Claire Che and Shawna Kwan of Bloomberg News.