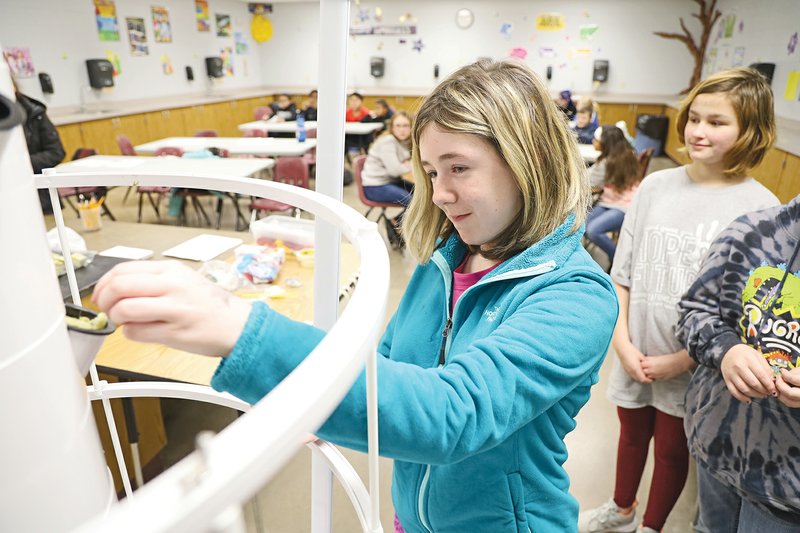 Abigail Haile, a fifth-grader, plants seeds in a tower-garden unit at Morrilton Intermediate School. Three of the indoor units were donated to the school’s science program as part of a pilot program on healthy habits last year.

Champ McNabb, age 11, of Morrilton Intermediate School, is an athletic triple threat, playing quarterback in football, forward in basketball and virtually any position on the baseball diamond. Champ, whose dad is a coach, stays active through the changing sports seasons of the year.

Just a fifth-grader, Champ has a lot of sports ahead of him, but he’s already wise beyond his years in one important aspect of training and competition — eating for performance and health.

“Before, I usually ate junk food like McDonald’s and Taco Bell and that stuff. And I was drinking sodas and Gatorades,” Champ said. “After I started eating healthier, like eggs and bacon, and started drinking more water, it really helped me.”

Since changing his eating habits last year, Champ said he’s enjoyed a noticeable difference in his performance and overall health.

“It’s improved a bunch because before I was like, really tired and really slow because of the food I ate,” he said. “Now, I’m really in shape and have more energy.”

Sarah Stobaugh, second-year principal of Morrilton Intermediate School, smiled broadly as Champ described the positive changes that have come with his new eating habits. Last school year, the school participated in a pilot program through Arkansas Champions for Health, a Little Rock-based nonprofit that focuses on helping Arkansas youth learn how to attain and maintain healthy lifestyles.

Morrilton Intermediate houses 530 students in grades four through six, along with 50 staff and faculty members. Because of a high local poverty rate, 100 percent of the school’s students receive free lunch, but otherwise, the school is best described as typical.

“We did not get picked because we’re a bunch of overweight teachers,” Stobaugh said with a laugh. “We were not the chubby school, either. Our students are very average for Arkansas, but Arkansas has a really high obesity rate.”

In fact, according to materials supplied by ACH, one in three children in the state are chronically ill, with obesity leading the list. The pilot sought not only to introduce healthier options but make them so present throughout the school day that sound habits would become ingrained in the students.

“Healthy Active Arkansas and the Arkansas Center for Improvement had been working on childhood obesity for a decade and had not really seen the needle move in the right direction,” said Amber Bobo, Arkansas Champions for Health strategy director. “They were interested in our pilot because no one had attempted to put forth so many initiatives at the same time, what they would call a ‘kitchen sink’ method.

“We involved the teachers and staff and the students. We did one engagement at the end with cooking that was in a partnership with the Arkansas Hunger Relief Alliance Cooking Matters. We basically just invented all these different health and wellness initiatives.”

Among the components of the pilot program was introducing water stations in the cafeteria, providing health challenges to students and supporting a running club. Three indoor tower-garden units were donated to the science department, teaching students how food is grown, which Stobaugh called particularly impactful.

“We have a lot of students in high poverty, eating processed foods. They get what they can buy, and a lot of times, they’re not choosing fresh options,” Stobaugh said. “The tower-garden experience was really cool for our kids. We did tomatoes, which are really hard to grow in those things. We did lettuce, cucumbers, herbs.”

“That, for a lot of our kids, instilled pride in knowing where [the food] came from. We’d pick the lettuce, and then we’d walk through the cafeteria, and they were like, ‘I need to try that! I’m the one that grew that!’ So that was a really cool thing we did that we extended this year.”

During the pilot program, the school devised a number of ways to carry the healthy habits and understanding over to the home, hosting family cooking nights and creating a newsletter to keep parents abreast of what was being taught. Stobaugh said the most effective communication tactics, however, were from the students themselves.

“Some of our kids were putting positive pressure on their parents. Some of them would say, ‘If you are going to McDonald’s, what could you choose instead of that? Don’t tell them you need those extra fries. Tell them you want those apple slices.’ Our approach was always students — you are in control of what you can do.”

The program extended to the faculty and staff, addressing issues as varied as financial and mental health, as well as physical health and eating right.

“We started out the school year with a questionnaire to determine just what we wanted to focus on,” said Stobaugh, who focused on improving her work-life balance. “It could be mental health, physical health, financial health — all of those things. It was completely voluntary, but all but two of our teachers did it for their own personal reasons. Then we would meet with our coach once a month. They would come into the school, and we would set goals.”

Rita Bowens, who works in the cafeteria, took advantage of the program as a way to shed some excess pounds.

“My goal was to lose 15 pounds and to start eating healthy,” Bowens said.

“I reached my goal, but it was hard. [My coach] kept telling me, ‘You are what you eat.’ I never thought about that. Then I started sticking to it, and I started texting her,” Bowens said.

“Not only was she my coach; we got close to each other. She became like family to me, and I would call her, and she’d be like, ‘I wouldn’t do that if I was you. I wouldn’t eat that if I was you.’ And it really helped me. It changed me tremendously,” Bowens said.

“[The pilot] was one of those things where we made a difference and it wasn’t like a sweeping difference, but it was a difference in the right direction,” Bobo said to sum up the program. “We are now taking what we learned, and we do plan to continue in another school.”

In Morrilton, the really exciting payoff came this year, when faculty and staff could see that the lessons learned during the pilot had taken root.

“The change in culture in this school has just been huge,” Stobaugh said. “Teachers have realized the impact they can have on students, not just in ‘I taught you how to read,’ but ‘I’m teaching you about character. I’m teaching you about making good choices’ and all the things that, sadly enough, get put on the back burner when we’re so worried about that test that’s coming up.

“We’re doing our students a disservice if we do not address every aspect of their day. There are other things that we’ve got to take care of before we can even crack open a book, and I think a lot of that came out of that pilot. What a difference we can make if we just take a few minutes to talk to these students about making good choices. And what a difference we can make if they see us making those same good choices.”

As for Champ McNabb, sticking to his newfound habits isn’t easy, especially given his family’s full schedule that competes with preparing a sit-down dinner. But he’s determined to see things through, he said.

“Taco Bell, junk foods, are really hard to give up at first, but once ([teachers] started talking to me about changing my foods, I was like, I can’t do this anymore,” he said. “I still really want that stuff sometimes, but I just can’t do it.”

Asked to boil down his experience into one simple piece of advice, Champ thought for a moment.

“Stop eating what you’re eating, and switch over to the good stuff,” he said.