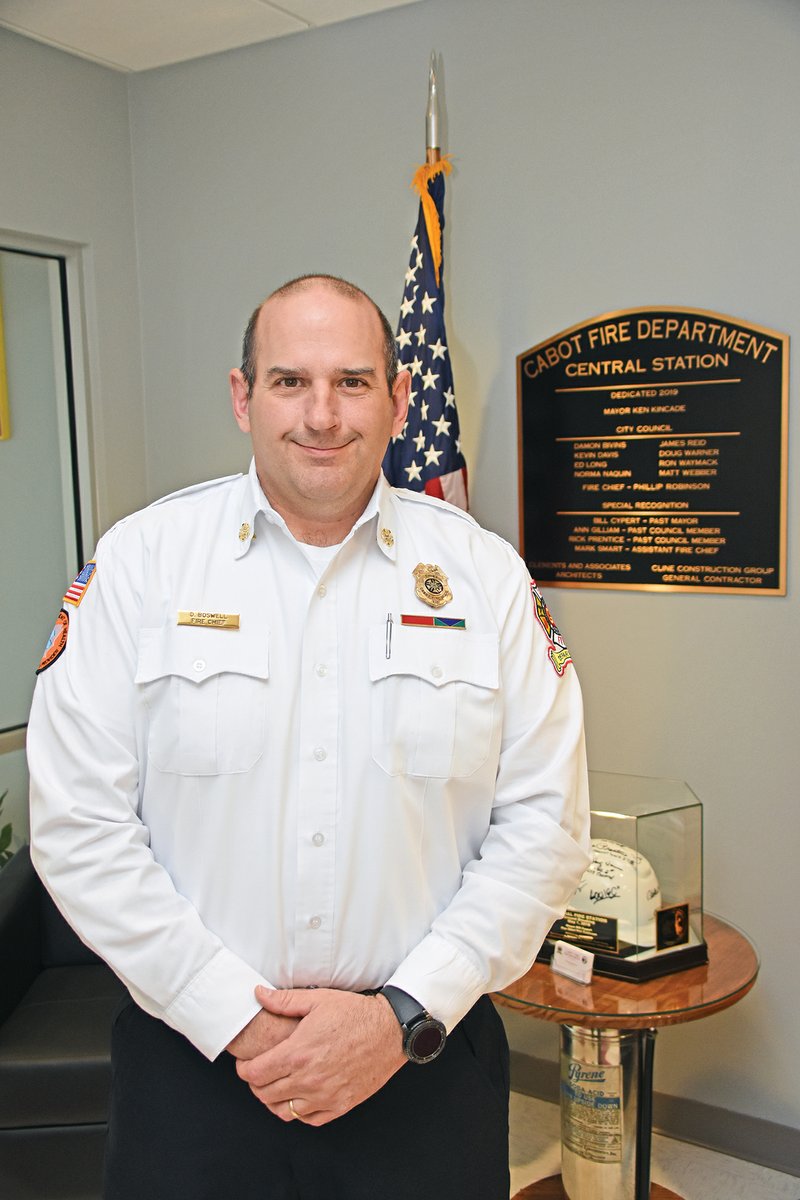 Dwayne Boswell was officially named the new fire chief for the Cabot Fire Department following a City Council meeting Dec. 16. He has worked for the department for more than 20 years and replaces former chief Phil Robinson. ( Staci Vandagriff)

One night at about 10 p.m., on his way home from a date with his now wife, Dwayne Boswell of Cabot saw that one of his neighbors’ chimney was on fire.

“I told my neighbor his chimney was on fire, and we put it out,” Boswell said. “But then at about 2 a.m., I heard some commotion, and I looked outside, and his entire house was on fire.

“I went over and put the fire out, and I helped drag some of the furnishings out. I realized then [that becoming a firefighter] was a good way to help people.”

That was Boswell’s first taste of being a firefighter, and a few days later, he went to the Cabot Fire Department and asked the chief how he could help.

“At the time, I just wanted to help out my community,” Boswell said. “I got an adrenaline rush from it, and I wanted to explore more about it.

“The following week, they were having their biweekly meeting, and I showed up and was introduced as their newest firefighter — that’s how I got started.”

Boswell started with the Cabot Fire Department in 1994, a year after he graduated from Cabot High School. Now 25 years later, Boswell has been named the new fire chief for the department after the previous chief, Phil Robinson, resigned in August.

Boswell was named interim chief Oct. 21, and at the City Council meeting Dec. 16, Boswell was officially named the new chief.

“Since I got on the Fire Department, I’ve always been a real ambitious person,” he said. “And I love this town and the community, and I love the guys that I work with.

“With me loving the job and being ambitious and wanting to excel and be good at everything I’ve done, I have always worked toward the career path for being the chief in this town.”

“Dwayne’s heart bleeds red for Cabot,” Cabot Mayor Ken Kincade said. “He is a very loyal citizen, firefighter and now a leader in our city.

“I’m so happy to have him lead our department for years to come in a positive and progressive way.”

Boswell is originally from Fort Worth, Texas, but moved to Cabot when he was in the sixth grade after his dad was relocated to the Little Rock Air Force Base in Jacksonville.

“I married a local girl, my high school sweetheart, and I set down roots here, and I have been here ever since,” Boswell said. “When I first became a firefighter, I wouldn’t have considered it a career. It was just something fun to do and pass the time.

“But as Cabot and the department grew as a city and an organization, it became a career all of a sudden. It’s an actual career that you can support your family with and retire from. To be able to do that in the community you live in is amazing.”

After Robinson left, until Oct. 21, when Boswell was named interim chief, the three battalion chiefs ran the department. Boswell said it felt like a five-to-six-week on-the-job interview.

“They observed how it was running and the ideas I was able to express for my vision for the department and the city,” Boswell said. “And me coming from within the department, and knowing the city and the men of the department, played a big hand in going from interim to fire chief.”

Dewey Coy is a battalion chief at the Jacksonville Fire Department and has known Boswell for more than 20 years.

“I would describe Dwayne as a good person who is very honest and forthright,” Coy said. “He is dependable and a good friend, and a better husband and father. He is just a great person.

“I would like to believe that I am one of his biggest fans, and I think he will do an outstanding job for the department, the city and the citizens as a whole as the new chief.”

Boswell said that when he first became a firefighter, he was too naive to ever think it would turn into a career and never thought he would be good enough to be considered for the role of chief.

“I was so green,” he said. “I actually left and came back a couple of times and pursued other career paths, but I would always be pulled back to the city and the department — I could never shake Cabot.”

He said that whenever he would pursue other careers, he would never feel comfortable and knew it wasn’t where he belonged.

“I don’t think I wanted to be anywhere else than Cabot,” Boswell said. “It’s a whole package deal here with the community and being a part of the team, and team sports was big for me growing up.”

“He’s passionate,” Coy said. “He knows why we are here as firefighters. He knows the mission that we have, and he does a very good job at being a leader by example.

“He is not a manager; he is a good leader. He leads by example and walks the walk and talks the talk.”

Boswell said one of his goals as chief is to change the department’s image to a more professional organization like some of the bigger departments.

“I want others to respect the department and the men, and I think if we can get to that level, we will have folks standing in the street who want to work for the department …,” he said. “My main vision is for those who work here to trust me, trust the city and, when they come to work, to be a part of the organization and the decision-making process — just helping them make sure they have the resources they need to do their job.”

“The guys that we have developed over the years have the pedigree and resumes for them to be anywhere, and they choose to be here,” Boswell said. “It says a lot about our department.”

He said that as of right now, he doesn’t have any plans to add any more stations for the department but may eventually reassign some of the stations where areas of the city are growing.

“It just depends on the growth of some of our businesses,” he said.

“Dwayne has lots of ideas that will help benefit our community and our department, and I hope that I am here to implement his plans for our city,” Kincade said. “The best is yet to come.”

Boswell’s father-in-law, Bobby Beal, said Boswell is “loyal and works hard and makes a good living for his family.

“He tries to put everyone first. He started out in Cabot as a part-time firefighter and worked his way up to fire chief. … That tells you a whole lot right there.”

Beal, who served as fire chief in Austin, Arkansas, years ago, said Boswell enjoys going out and protecting the people and the community.

“He will do whatever he can for the community, and the department has always been his priority,” Beal said. “At one point, he even left the state, but he always comes right back.

“I’ve asked him a couple times why he keeps coming back, and he said he is just trying to protect the people and help his community the best he can. I think that is what he is trying to do.”

Beal said he has visited the department since his son-in-law has become chief.

“I can see a difference in the department already. He tries to take care of his boys and keep the morale up,” he said.

“He knows the business and knows what it takes to run the department. I think he will do an excellent job,” Beal said.

“I guess it is kind of a cliche answer, but it is true for me,” Boswell said. “I’m there for people on the worst days of their lives, and I’m there to help them out. I have the spirit or desire to help people when they need it the most.

“It is a pretty rewarding feeling. We provide support, reassurances and safety for these folks — it is very fulfilling.”