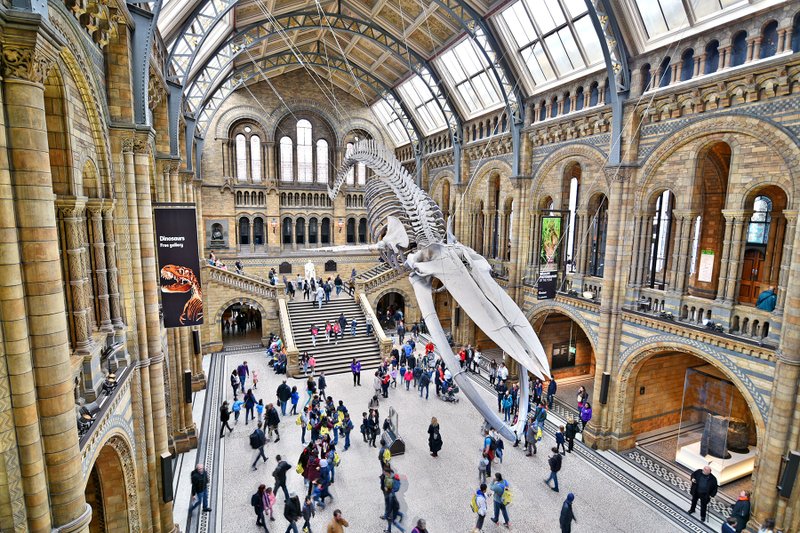 Enjoy many of Londons outstanding museums, including the Museum of Natural History, for the price of a voluntary contribution.

London is one of Europe's most expensive cities. But with fine public transit, many free museums, inexpensive plays, and fun food markets and pubs, the city becomes more enjoyable. Here are some of my tips for savings.

Take the Tube: London's black cabs are iconic, but for the cost of one ride, you can buy an Oyster card transit pass, covering a week's worth of rides on buses and the London Underground (aka the Tube).

Budget Sleeps: London is one of the few places I'd consider staying in a chain hotel. Target an appealing neighborhood and browse reviews at a hotel-booking website such as Booking.com. Check auction-type sites such as Priceline and Hotwire, which match travelers with empty hotel rooms, often at prices well below normal rates. Or book through Airbnb or a similar company instead: I'd rather rent a palatial room or apartment a 20-minute Tube ride from downtown than pay the same for a grubby budget hotel a five-minute ride away.

Free Museums: My favorite museum in London — the British Museum — is free, as are these impressive sites: the British Library, National Gallery, National Portrait Gallery, Tate Britain, Tate Modern, Wallace Collection, Imperial War Museum, Victoria and Albert Museum, Natural History Museum, Science Museum, National Army Museum, Sir John Soane's Museum, and the Museum of London. About half of these museums request a donation of about $6.50, but whether you contribute is up to you.

Other Freebies: London has plenty of free performances, such as lunch concerts at St. Martin-in-the-Fields and summertime movies at The Scoop amphitheater near City Hall. There's no charge to enjoy the pageantry of the Changing of the Guard at Buckingham Palace, rants at Speakers' Corner in Hyde Park (on Sunday afternoon), opulent displays at Harrods department store, the people-watching scene at Covent Garden, and the colorful streets of the East End. It's free to view the legal action at the Old Bailey and the legislature at work in the Houses of Parliament. You can get into a bit of the Tower of London and Windsor Castle by attending Sunday services in each place's chapel (but you'll have chapel access only). And, Greenwich is an inexpensive outing: Many of its sights are free, and the journey by rail is cheap.

Good-Value Tours: The London Walks tours with professional guides are one of the best deals going (about $16). Note that the guides for the "free" walking tours are unpaid by their companies, and they expect tips — I'd pay upfront for an expertly guided tour instead. You'll also find reasonably priced tours by bus, boat and bike.

Buy Tickets Online: Tickets for many of London's most popular and expensive sites, such as the London Eye Ferris wheel, St. Paul's Cathedral, Westminster Abbey and the Tower of London, can be bought online in advance, which will not only save you from standing in ticket-buying lines, but also will usually save you a few pounds per ticket.

Totally Pants (Brit-speak for Not Worth It): Skip the London Dungeon. It's gimmicky, overpriced, and a terrible value, despite what the long line at the door might suggest. And the cost of the ride to the top of The Shard, western Europe's tallest skyscraper, is unfortunately even more breathtaking than its view.

Theater: Compared with Broadway's prices, London's theater can be a bargain. Seek out the freestanding TKTS booth at Leicester Square to get discounts from 25% to 50% on good seats (and full-price tickets to the hottest shows with no service charges). Buying directly at the theater box office can score you a great deal on same-day tickets. A $6.50 "groundling" ticket for a play at Shakespeare's Globe is the best theater deal in town. Tickets to the Open Air Theatre at north London's Regent's Park start at $30. 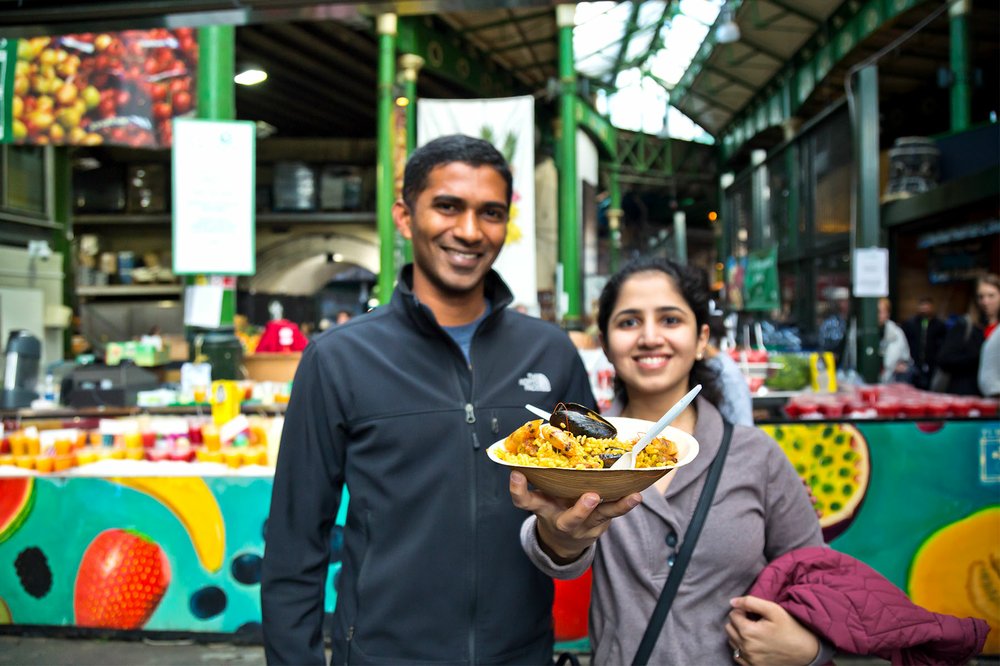 Borough Market, one of Londons numerous food halls and markets, can be a thrifty dining spot.

Pubs, Street Markets, and Picnics: Pub grub is the most atmospheric budget eating option — reasonably priced hearty classics such as meat pies and fish-and-chips served under ancient timbers. London thrives with street markets, many featuring the latest and trendiest food stalls — the perfect antidote to the city's high prices and interchangeable chain restaurants. For picnics, you'll find an array of carryout options, from Pret a Manger and Eat — selling fresh salads and sandwiches — to Marks & Spencer department stores (with a good deli) and their offshoot M&S Simply Food.

If you do your homework and take advantage of London's many freebies and bargains, you'll leave with happy memories of your trip instead of a regretfully empty wallet.