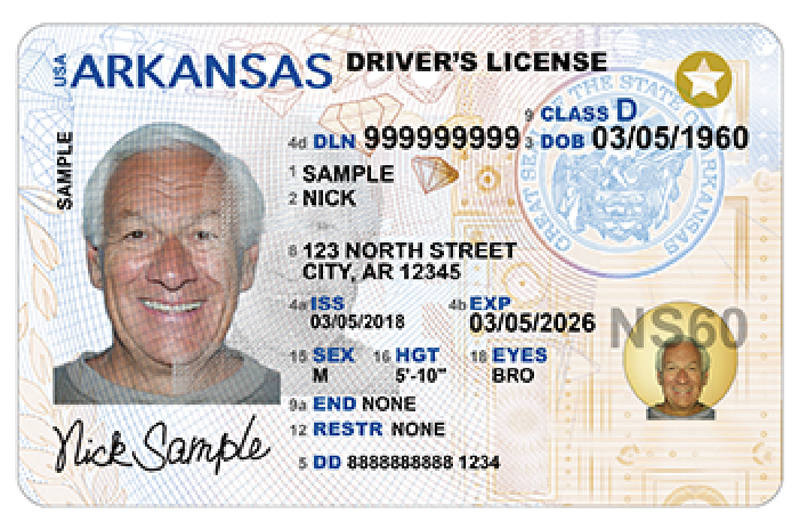 A sample Arkansas enhanced driver's license, or "Real ID," is shown in this undated photo.

"In compliance with the Real ID Act of 2005 -- aimed at deterring terrorism and identity fraud -- these Voluntary Enhanced Security Driver's Licenses (or Identification Cards) will be required for boarding a domestic flight or entering a federal building as of Oct. 1, 2020," she informed us way back then.

Chances are, a bunch of us decided not to worry about getting Real ID cards because it was way back then. In order to obtain the light, bright, ethereal-looking, gold-starred new cards, you needed to gather no fewer than five documents to prove you were you and that you lived where you claimed you lived. You had to haul your briefcase full of paperwork to one of what, at the time of Jenn's column, was only 25 state revenue offices issuing Real IDs. After Oct. 1, if you still had your plain old non-enhanced ID, you'd need extra forms of identification, such as a passport, to fly or to fall up into such desirable locales as the Federal Building in downtown Little Rock.

In April 2018, co-worker Eric Harrison did a full story about the Real ID cards, their requirements and the related headaches. "There has been considerable confusion about the documentation required, and even if you know what you're supposed to bring, that doesn't mean you have it," he wrote. Which was all some of us needed to ... keep procrastinating.

Then, at the beginning of this year, local TV news reporters started yammering endlessly about the importance of getting the "voluntary" Real ID cards and warning viewers not to wait until the deadline. To further motivate people to get off their duffs, reporters trumpeted the news that all state revenue offices would soon be offering them.

I procrastinated on getting Real ID because I was under the impression that I needed my actual Social Security card, apparently lost in a past move or wallet switch. Last year, I naively showed up at the Social Security office to request a new card. At least I was able to enter the Federal Building without a Real ID! However, I didn't realize that the SSA business is best conducted by appointment; walk-ins must take a number-letter combination and have camping equipment in tow. I eventually ducked out.

After the TV folk began yammering about Real ID at year's beginning, I did some investigating of the required documents and realized I needed only bring an official document on which my full Social Security number is listed, such as my W-2. So, in February, hubby Dre and I decided to beat the crowd by eight months and take care of this Real ID business once and for all. I went by myself in one Monday morning, got the new card, then returned with Dre that afternoon.

Birth certificates are named as one of the qualifying documents for Real ID. Although we have these, we chose to use the alternatives: our depressingly blank passports. In addition to birth certificate/passport, secondary proof of identity (including one's old driver's license or ID card) and proof of Social Security number, one needs two proofs of residency, such as a utility bill or bank statement or paycheck stub. Everything went smoothly until Dre needed to show a second proof of residency to get his enhanced State ID card. We didn't realize that his second document -- a joint bank-account statement -- still bore our pre-September-move address. The home utilities are in my name only, but luckily I was allowed to run out to the car, grab the recent electric bill I'd flashed to get my own card and sign an affidavit that my old man crashes with me.

A warning issued in Eric's story, reiterated here: An enhanced driver's license or state ID card doesn't mean you get an enhanced photo. You'll just have Real ID in Triple Ugly -- the blurry main photo on the left of the card; a weird, ghostly silhouette of the main photo, half-imposed over the main photo and a tiny, round, otherworldly version of the main photo on the lower right of the card. I went from looking like a wanted-poster subject to looking like a plump-faced Touched By An Angel TV-show audition reject. (And was my hair bun that dang crooked?)

For more information on Real ID, visit the Arkansas Department of Finance and Administration online at appengine.egov.com/apps/ar/DFA/RealID, peep the ominous Oct. 1 deadline clock countdown in the upper right-hand corner and take the "What do I need to get a REAL ID?" quiz. One bit of good news you'll find: You can at least rejoice about not needing to trot the same five documents to the Revenue office every time you need to renew your Real ID card.

Just count on still needing the same 50 documents to get a new car license or car-tag renewal.