Rockets again target base in Iraq

3 Americans injured as Camp Taji struck for second time by Compiled by Democrat-Gazette staff from wire reports | March 15, 2020 at 4:10 a.m. 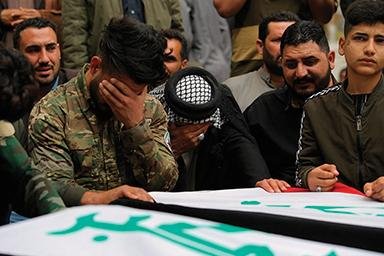 Mourners and Iraqi militia fighters weep Saturday in Najaf at the flag-draped coffins of two fighters of the Popular Mobilization Forces, a coalition of militias including some backed by Iran. The two were killed in a U.S. airstrike. (AP/Anmar Khalil)

BAGHDAD -- A barrage of rockets hit a base housing U.S. and other coalition troops north of Baghdad on Saturday, Iraqi security officials said, just days after a similar attack killed three servicemen, including two Americans.

At least three Americans and two Iraqi troops were injured in the latest attack. Two of the Americans were seriously injured, the military said, adding that Iraqi security forces had made an arrest.

The Iraqi military said in a statement that the "blatant attack" had struck Iraqi air-defense units. It said seven rocket launchers had been found in a garage near the base, along with two dozen rockets that had not been fired.

The military also issued a warning to the perpetrators and those who may have enabled them.

"Those who conducted this attack must declare themselves to be dealt with by the law," the statement said. The government's Joint Operations Command "considers any party that mobilizes and legitimizes these actions as a potential partner," it added.

Jonathan Hoffman, chief Pentagon spokesman, repeated Defense Secretary Mark Esper's comments from last week, saying: "You cannot attack and wound American service members and get away with it. We will hold them accountable."

Iraq's military said the "brutal aggression" wounded a number of air-defense personnel who remain in critical condition, but it did not provide a number.

The attack was unusual because it occurred during the day. Previous assaults on military bases housing U.S. troops typically occurred at night.

The earlier rocket attack against Camp Taji on Wednesday also killed a British serviceman. It prompted American airstrikes Friday against what U.S. officials said were mainly weapons facilities belonging to Kataib Hezbollah, the Iran-backed militia group believed to be responsible. Kataib Hezbollah is also associated with the Iraqi security forces.

Iraq's military said those airstrikes killed five members of the security forces and a civilian, while wounding five fighters from the Popular Mobilization Forces, an umbrella organization including an array of militias, including some Iran-backed groups.

Iran-backed Shiite militia groups vowed to exact revenge for Friday's U.S. strikes, signaling another cycle of retaliatory violence between Washington and Tehran that could play out inside Iraq.

Iraq's military cautioned the U.S. against retaliating for Saturday's attack as it did on Friday without approval from the Iraqi government. Taking unilateral action would "not limit these actions, but rather nurtures them, weakens the ability of the Iraqi state," the statement said.

"We also refuse that the American forces or others take any action without the approval of the Iraqi government and the commander in chief of the armed forces, as they did on the morning of 3/13/2020," it said. "This necessitates the speedy implementation of the parliament's decision on the issue of the coalition's withdrawal."

Iraqi politicians have made public calls for the departure of foreign forces after the Trump administration's decision in January to launch a strike outside the Baghdad airport that killed a senior Iraqi militia leader and Maj. Gen. Qassem Soleimani, a senior Iranian military figure known for his ties to terrorist groups across the Middle East.

About 5,000 U.S. troops are in Iraq, assisting the country in hunting down remnants of the Islamic State. Despite the calls for the departure of American forces in the wake of Soleimani's death, Pentagon leaders have said they hope to find a way for them to stay.

Gen. Frank McKenzie, commander of the U.S. Central Command, said Friday that counterstrikes on Popular Mobilization Forces bases were intended to send a message to Kataib Hezbollah and Iran that further assaults on coalition forces would not be tolerated. If that message is ignored, the U.S. could respond with additional strikes, he told reporters.

"If it doesn't work, we got plenty more places we can go and go to work, and I'm confident we'll do that," he said.

"We can't forget that the PMF is a recognized entity within the Iraqi security forces; they aren't isolated from the security forces and often are co-located on the same bases or use the same facilities," said Sajad Jiyad, a researcher and former managing director of the Bayan Center, a Baghdad-based think tank.

"Now the [Iran-backed] groups who supported the initial strike in Taji, who were the most outspoken, feel obliged, authorized, maybe even legitimized to respond, ostensibly to protect Iraqi sovereignty but really to keep the pressure up on Americans," he added.

"There are no red lines anymore," Jiyad said.

Wednesday's attack on Camp Taji was the deadliest to target U.S. troops in Iraq since a late December rocket attack on an Iraqi base that killed a U.S. contractor. That attack set in motion a series of incidents.

After the contractor was killed, the U.S. launched airstrikes targeting Kataib Hezbollah, which in turn led to protests at the U.S. Embassy in Baghdad.

After the Soleimani killing, Iran struck back with a ballistic missile attack on U.S. forces in Iraq.

The U.S. and Iran stepped back from further attacks after that reprisal. A senior U.S. official said in late January, when U.S.-Iran tensions had cooled, that the killing of Americans constituted a red line that could spark more violence.

In the past year, the Pentagon has placed new military assets in the Middle East in response to a perceived increase in the threat from Iran.

A European official in Baghdad said additional rocket attacks on coalition bases in Iraq were expected in the wake of the American strikes on Friday. The official, like others, spoke on the condition of anonymity because that person was not authorized to address the issue publicly.

Abu Ali al-Askari, a spokesman for Kataib Hezbollah, has warned Iraqi security forces to distance themselves from coalition troops and facilities by today, suggesting the group's intent to conduct further attacks.

Iraqi Shiite militias, which have varying levels of links to Iran, have taken on an expanded role in Iraq's security and politics since they began assisting the government response to an onslaught of Islamic State militants in 2014. The U.S. government blames the militias for killing at least 500 Americans in the war that followed the U.S.' 2003 invasion of Iraq.

Harakat al-Nujaba, another Iraqi militia, on Friday repeated a demand for the departure of U.S. forces. It said in a statement that the voices of Iraqis acting under the influence of the United States should be "snaffled shut" and called for "obligatory resistance for all the mujahideen whom America has experienced before, and will do so again in a way that will make it hard to forget so quickly."

Information for this article was contributed by Qassim Abdul-Zahra and Samya Kullab of The Associated Press; and by Missy Ryan, Louisa Loveluck and Mustafa Salim of The Washington Post. 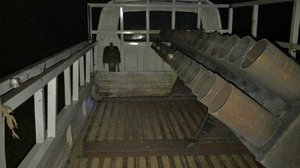 A photo released Thursday by the Iraqi government shows a truck rigged with a rocket launcher, after a rocket attack on Camp Taji killed three servicemen, including two Americans. More rockets hit the base Saturday, injuring at least three Americans and two Iraqis. (AP/Media Security Cell)