ASU able to get good jump on spring 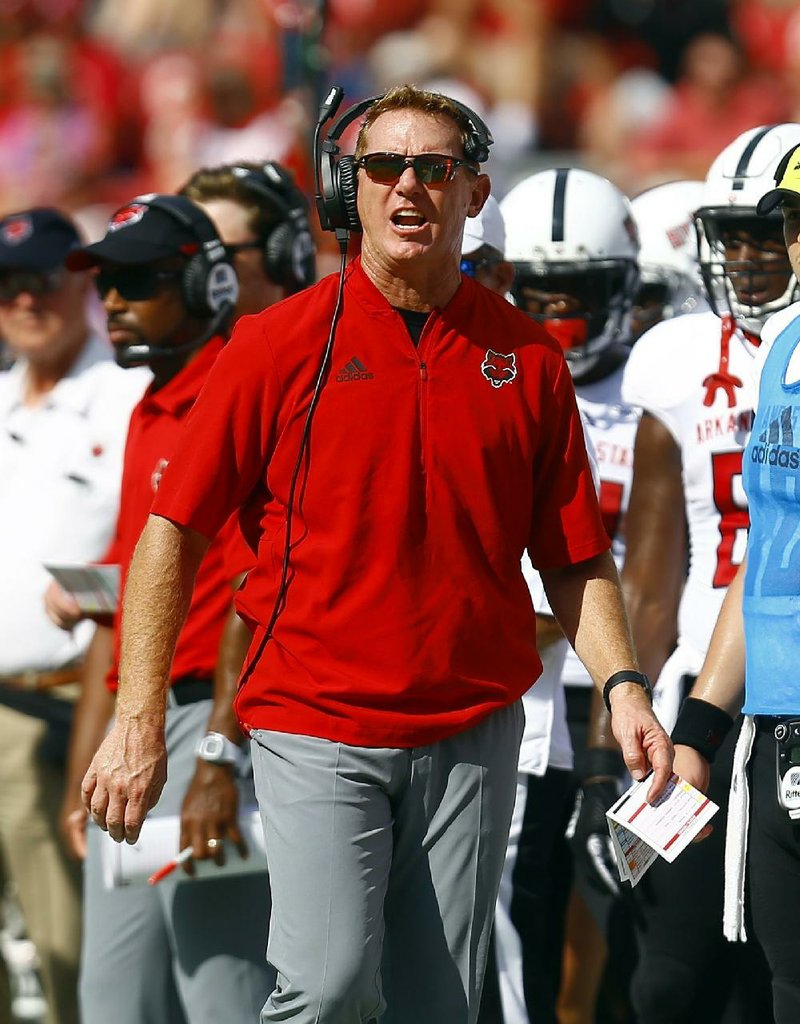 With Arkansas State having gotten in some spring practice before the coronavirus pandemic caused operations to halt, Red Wolves Coach Blake Anderson said he feels “really fortunate that we got the work that we did.” (AP/Butch Dill)

Gaining a head start before a pandemic struck was not the intention and completely beyond anyone's scope when the Arkansas State University football team opened spring practices Feb. 17.

It ended up working out that way.

With many college football programs still deep in offseason workouts, the Red Wolves were back on the practice field in mid-February.

But as the spreading coronavirus started to force the sports world's hand late last week and triggered shutdowns of professional leagues, college conferences and high school associations, it became apparent that ASU Coach Blake Anderson's decision to start spring camp early proved to be a stroke of good fortune, even if the Red Wolves weren't able to finish it.

"Extremely fortunate, no doubt," Anderson told the Arkansas Democrat-Gazette on Friday. "I don't think anybody really knows how long things are suspended for, if teams are gonna get some sense of spring ball or not. Nobody really knows at this point. We may look up in a couple months from now and teams may be back to doing normal business, but in the event that they didn't, I feel really fortunate that we got the work that we did."

On Friday afternoon, less than two hours before the Red Wolves were to conduct their 12th practice of camp, ASU announced that it was indefinitely suspending all organized practices by its athletic teams. That news came with little surprise. The SEC, for example, on Friday suspended all organized sports activities through at least April 15.

As of Sunday evening, the Sun Belt Conference had yet to formally announce a suspension of teams' practices and activities, but it had already indefinitely suspended spring sports seasons.

The league's athletic directors and school presidents are expected to hold conference calls today and will likely institute more drastic measures that other conferences have already adopted. The likes of the Big 12, the Southwestern Athletic and the Southland conferences have canceled their sports seasons for the remainder of the school year.

Anderson believes his team has practiced for the last time this spring.

"I do think we got better," he said. "I think we obviously still have a ton of holes to fill, but we got enough work to know what needs to be worked on. We saw guys that improved some, we saw some key areas that people need to improve on more, and the new guys that we got here in January got some valuable, valuable reps and they know now kind of what they're up against."

Most college football teams can't say the same right now. Many were only a few practices in, many hadn't even started. Alabama was set to open spring camp Friday afternoon before it was suspended indefinitely an hour prior.

The decision for ASU to begin spring camp so early, although unorthodox, was highly calculated by Anderson.

Anderson said prior to camp in February that the shift to an earlier start, and thus an earlier finish, was something he'd considered for some time and even thought about implementing last year. Among the reasons, Anderson hoped the shift would allow for more recovery time in case of injuries, be less burdensome on players' academics as the semester wound down, and create a prolonged, more fluid period of strength and conditioning workouts after camp and prior to the summer.

"If you can get them an uninterrupted cycle that we're gonna be able to create coming out of spring break all the way through the end of the semester, that's an eight-week-or-so cycle that we've been breaking up and we've been doing maintenance work in the past, and it's been folding in to finals and then to a three-week break of them not being here," Anderson said Feb. 5 on national signing day. "I think we've had some losses there. We've had to kind of start over in the summer, and we can't afford to keep doing that."

Anderson was particularly pleased with what he saw from the receiving corp -- a position group that loses Omar Bayless, the reigning Sun Belt Player of the Year, and Kirk Merritt. Senior nose tackle Forrest Merrill was also able to return to practice after he missed the second half of the 2019 season with a torn bicep.

There was also the ongoing quarterback battle that will continue to exist into fall camp between redshirt junior Logan Bonner and redshirt sophomore Layne Hatcher -- a competition that Anderson maintains is Bonner's to lose. Bonner underwent season-ending thumb surgery on his right throwing hand in late September.

"I think we're in great shape because we've got two quarterbacks that we think that can win," Anderson said. "I think we're right where we were when spring started, but really excited about how both of them are playing."

ASU practiced 11 of the 15 times the NCAA allows, including two scrimmages, the latest one Wednesday. The spring game had been scheduled for Thursday but was canceled. ASU also postponed Friday's pro day, a significant setback for ASU's NFL-hopefuls like Bayless and Merritt and punter Cody Grace.

Print Headline: ASU able to get good jump on spring