Fauci says it's time to 'hunker down' 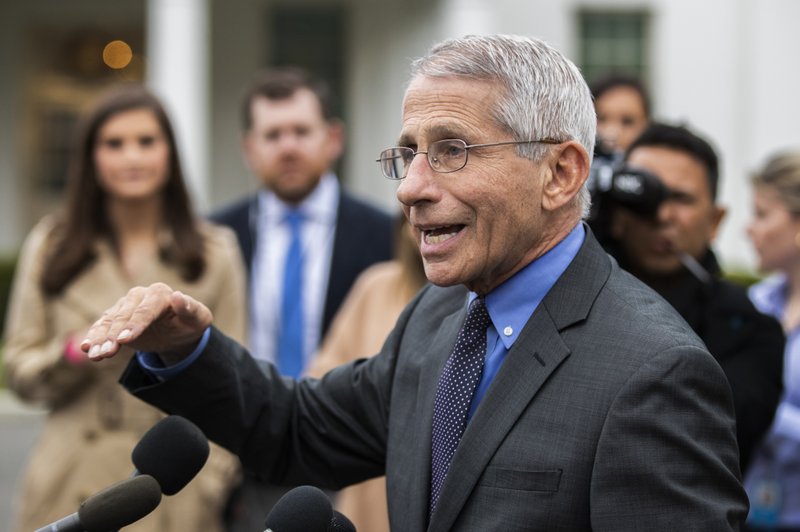 Dr. Anthony Fauci, director of the National Institute of Allergy and Infectious Diseases, speaks Sunday during a brie ng on the coro- navirus in the James Brady Press Brie ng Room of the White House. He is joined by Vice President Mike Pence (left). (AP/Alex Brandon)

Americans must be ready to take more drastic steps to slow the march of the coronavirus pandemic in the U.S., Dr. Anthony Fauci said as he made the rounds of major Sunday talk shows.

"Americans should be prepared that they are going to have to hunker down significantly more than we as a country are doing," Fauci, director of the National Institute of Allergy and Infectious Diseases, said on NBC's Meet the Press.

Asked if he would prefer some kind of 14-day national shutdown to "flatten the curve" of covid-19 spread, Fauci said -- in one of five interviews on Sunday talk shows -- "I would prefer as much as we possibly could."

On Fox News Sunday, though, the veteran infectious diseases specialist didn't endorse a nationwide shutdown. "Stringent mitigation and containment" measures will help the U.S. avoid getting to where Italy is now, he said.

Fauci was asked on CNN's State of the Union if hundreds of thousands of Americans could die from the coronavirus.

"It's possible because, when you do a model, you have a worst-case scenario, the best-case scenario, and the reality is, how you react to that will depend where you're going to be on that curve," he said.

"It sometimes gets taken out of context, but we have to be realistic and honest," he said. "It is possible. Our job, our challenge is to try and make that not happen."

Confirmed coronavirus cases in the U.S. have reached more than 2,800, with more than 60 confirmed deaths.

Scott Gottlieb, the former head of the U.S. Food and Drug Administration, said some hospitals are preparing for worst-case scenarios.

"There's no question the steps right now are changing the courts of the epidemic," said Gottlieb, now a special partner at New Enterprise Associates, a venture capital firm that invests in the health care and biotech sectors. "We're impacting this, but we need to do much more."

On ABC's This Week, Fauci said domestic travel restrictions are not likely in the immediate future but are possible as the U.S. refines its response.

"Travel restrictions within the country have not been seriously discussed," said Fauci, a member of the White House coronavirus task force. He added that the President Donald Trump administration is "open minded" about potential steps.

Asked if cities like Seattle and New Rochelle, N.Y., should be on lockdown given the high number of confirmed cases there, Gottlieb said it was a question of rights.

"I don't think we can quarantine a U.S. city, lock it down, and deny people their liberty in this country," he said. But by doing things like closing restaurants and preventing large gatherings, "there's no place to go; people stay home."

Fauci said he was "absolutely" confident the federal government is doing what it needs to contain the coronavirus outbreak.

"If it looks like you're overreacting, you're probably doing the right thing," Fauci, 79, said on Face the Nation. "Right now, myself personally, I wouldn't go to a restaurant. I just wouldn't, because I don't want to be in a crowded place."

Print Headline: Fauci says it's time to 'hunker down'