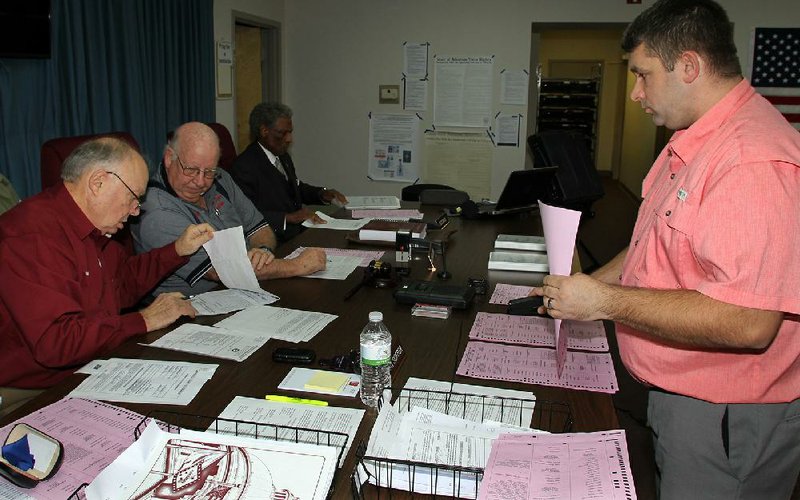 PINE BLUFF — After nearly two hours of wrangling over issues related to the logistics of conducting a primary runoff election in Jefferson County while awaiting word on whether the election can be postponed by a court order due to the covid-19 crisis in Arkansas, a longtime local election commissioner abruptly quit and walked out about an hour-and-45-minutes into the meeting as it was about to conclude.

The commission was preparing to vote on a letter, which it subsequently approved, to be sent to Prosecuting Attorney Kyle Hunter requesting that he ask a court to postpone the election until May 19 and to vote on a measure limiting polling places in the event the election cannot be postponed when Stuart “Stu” Soffer — a commissioner since 2003 — walked out of the meeting room, twice saying he was abstaining from the vote.

When Soffer returned, Michael Adam, commission chairman, asked if he had an opinion on sending the letter after deleting two paragraphs at the request of Commissioner Theodis "Ted” Davis — one concerning the reduction of polling sites and the other regarding payment to commissioners for work outside of meetings — from the requested court order.

After saying he wanted the final reimbursement due to him for election work he had recently performed, Soffer walked out of the building.

“I think (Soffer) did great work on the first part of the letter but I just don’t think those two paragraphs should be a part of it,” Davis said. “I don’t think we need to say anything about polling sites or even suggest it. And the other part is about the compensation. You and Soffer can vote to pay him. I won’t.”

Davis, 75, a Democrat, and Soffer, 78, a Republican, have locked horns in the past about Soffer doing work outside of commission meetings and billing the county, a practice that Arkansas Attorney General Leslie Rutledge has opined is legal provided the commission cannot find anyone else qualified to do the work. Soffer has claimed that no one can be found who can do the work and Davis has said Soffer would not accept anyone selected by the county judge, who is the chief executive of the county.

Soffer and Davis have a history of conflict on the commission. Late last year, a special prosecutor, Jason Barrett, was selected to look into allegations of terroristic threatening Davis made against Soffer after a confrontation during an October meeting. In February, Barrett decided against prosecuting Soffer, and instead warned both he and Davis that the two needed to conduct themselves in a more professional manner.

In January, citing “corruption, racism, hostility, and blatantly self-serving agendas,” and calling the environment on the commission “toxic, dangerously threatening, and intimidating,” Davis resigned from the commission, but was reinstated the following month when the Democratic Central Committee in Jefferson County refused to accept his resignation.

Later Monday night, when contacted by phone, Soffer said he had not definitely decided to resign, but that he will take a hiatus from the commission until after the election while he mulls over whether he wishes to continue.

“For right now they can just sink or swim, I’ve had it,” he said. “Tonight was totally unnecessary. Davis is posturing on everything. He’s well intended, but I’ve just had it. I can’t tell you how many hours I’ve spent on this thing and the governor’s been no help, the state board has been no help. People who don’t have a clue are giving recommendations and those of us in the trenches are being left to sink.”

Soffer said the logistics of trying to notify 12,000 voters to encourage them to vote absentee, get applications mailed out and back from those voters before the March 24 deadline, then get ballots mailed out and returned in time to be counted by March 31, are nearly insurmountable.

“All this while the courthouse is closed,” he said. “Thank God for the prosecutor willing to go forward. And then Davis wants to argue about me being paid for my time at a rate I was paid 22 years ago. It’s not worth it. It’s just not worth it. The people of Jefferson County deserve better than what they’ve been getting from their elected officials and their election commission all down the line.”