Marlins Man left wondering what to do 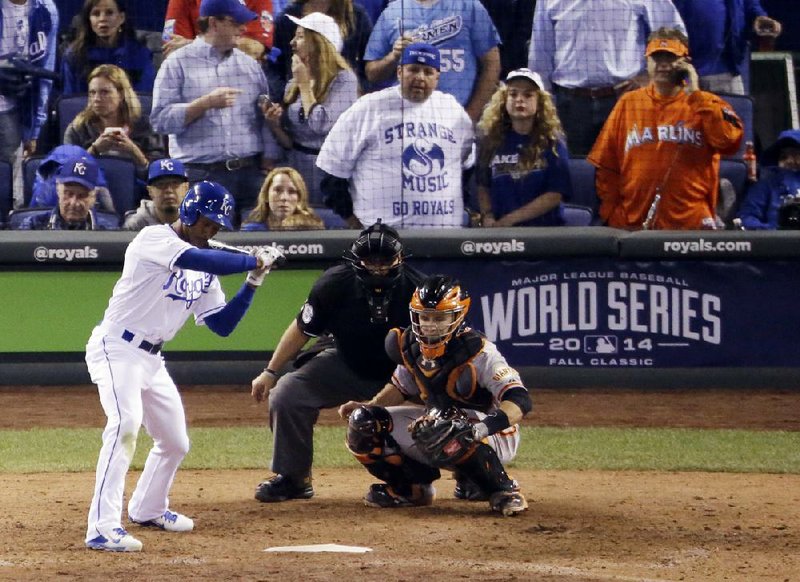 Miami Marlins fan Laurence Leavy (rear right) is seen here at a 2014 World Series game in Kansas City, Mo. Leavy, better known as “Marlins Man,” is wondering what he’s going to do while games won’t be played because of the coronavirus pandemic. AP le photo)

And you wonder what to do? You wonder how to navigate a world without sports?

No one will miss more games coming up due to the coronavirus pandemic. He canceled plans to follow two favorite teams, Kansas and Florida State, in March Madness. He canceled reservations for the Final Four in Atlanta.

He won't use his five tickets for the March 26 Miami Marlins opener behind home plate between singer Marc Anthony and actor William Levy, same as last year.

You can hold that thought and still miss watching the NBA and NHL seasons or an April weekend -- as Marlins Man scheduled it -- of Thursday's Kansas City Royals home opener, Friday's Colorado Rockies home opener; and Saturday and Sunday's first home weekend of the Los Angeles Dodgers at the San Francisco Giants.

"First-row tickets," he said. "Huey Lewis and the News would have been behind me in San Francisco."

He's at Ground Zero of the sports fans' anguish.

"Now what will I do?" Marlins Man asks.

What will we all do?

The fun of sports isn't always defined by the size of the game or talent of the team. It's the moment. The beauty that might break out. That's what people who don't enjoy sports are missing.

"On April 10th, I was going to Philadelphia for the Army-Navy baseball game," Marlins Man said. "I go every year. Two years ago it was in Boston. I go as a guest of the Army now and sit surrounded by generals. They all want pictures of me. Can you believe that?"

On April 14, he planned to attend the inaugural game of the Marlins' Triple-A franchise in Wichita, Kan. He bought $5,000 worth of tickets -- an entire section -- for policemen, firemen and first responders. He was to fly over the pre-game field in a B-29 bomber, the kind his dad flew in World War II.

"It's just sinking in what I'll be missing," he said.

What we're all missing. What moments we'll never get back. Marlins Man started his never-ending sports watching in 2012 when diagnosed with cancer. He was misdiagnosed as it turns out. He was fine. But somewhere in that he decided to stop saying, "One day, I want to ..."

One day became every day. He set up his laptop work from hotels, called daily into his office and began attending games. He invited strangers to go with him at most venues. He's then attended a wedding of strangers he brought together. He once saw 18 NBA playoff games in an 18-game stretch.

"Are there two of you?" TV analyst and Hall of Famer Shaquille O'Neal asked.

Marlins Man attended 304 sports games last year. That included seven double-header affairs and a triple-header of Yankees, Jets and Mets games one Sunday in New York ("I'm never doing that again -- it took a day to recover," he said of the triple-header.)

He was at the Heat's game on Wednesday night in good part to see Charlotte's Devonte Graham, who played on a Kansas team that Marlins Man befriended. Before halftime, he realized the NBA season was in jeopardy. By the end of the game, he realized all sports were.

By the next day, as sports were canceled one by one, he suddenly had a lot of time of free time. As you do. As I do.

"My office is going to freak out, because I'm going to be in there for a month," he said. "I'll probably have people quit. I haven't been in the office for a full month straight since 2012."

It could be two months, he was told.

"I'm wondering about the NFL draft in Las Vegas," he said. "I've got reservations for that, too."

Print Headline: Marlins Man left wondering what to do