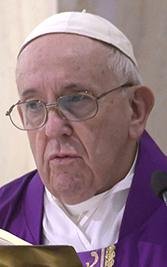 Pope Francis celebrates Mass at his Santa Marta residence, at the Vatican, Sunday, March 15, 2020. Masses for the faithful have been suspended following Italy's Coronavirus emergency. For most people, the new coronavirus causes only mild or moderate symptoms. For some, it can cause more severe illness, especially in older adults and people with existing health problems. (Vatican News via AP)

• Pope Francis left the Vatican to make a surprise visit to two churches Sunday even as Italian health authorities demanded that people stay home as much as possible to battle the country's severe coronavirus outbreak. The Vatican says the pope's trip included a brief stroll on a main Rome street to pray for the end of the pandemic. The pope did a stretch of the street "as if on a pilgrimage," Vatican spokesman Matteo Bruni said. Francis prayed in the Basilica of Santa Maria Maggiore, then went to a church that has a crucifix carried in a 1522 procession in Rome when the city was stricken with plague. His walkabout came just hours after the Holy See announced that the Vatican's Holy Week ceremonies will go ahead but without public attendance as Italy tries to contain the virus outbreak. Bruni said in a statement that "as far as Holy Week liturgical celebrations are concerned, I can specify that all are confirmed." But he added: "As things stand, under study are the ways they would be carried out and who would participate while respecting the security measures put in place to avoid spread of the coronavirus." He added that in any case, faithful will be able to follow the ceremonies via TV, radio and online media.Vatican media added that "until April 12 the General Audiences and the Angelus presided over by the Holy Father will be available only in live streaming on the official Vatican News website." April 12 is Easter Sunday. 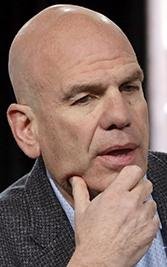 Photo by Invision
FILE - This Jan. 15, 2020 file photo shows David Simon speaking at the "The Plot Against America" panel during the HBO TCA 2020 Winter Press Tour in Pasadena, Calif. The 6-part mini-series, based on the novel by the late Philip Roth, premieres Monday, March 16. (Photo by Willy Sanjuan/Invision/AP, File)

• David Simon, the creative force behind The Wire, Show Me a Hero and Treme, found himself in unfamiliar territory with his latest series, HBO's The Plot Against America. He'd developed books into shows before -- nonfiction works that demanded adherence to facts. But Simon didn't necessarily feel liberated in adapting Philip Roth's 2004 novel, a reimagined history of World War II-era America made fascist in the grasp of a real-life, wildly popular hero, the aviation pioneer Charles Lindbergh. "There were things I thought that worked as a novel that were not going to work in a six-hour miniseries," Simon said. He broached his concerns in a 2017 meeting with Roth, a Pulitzer Prize winner who died in 2018 at age 85. "I had an idea, but I didn't have the guts to venture it. I mean, he's in the canon, he's one of our great literary voices, and I'm a TV hack," said a self-deprecating Simon. "And I'm asking to play with the end of a novel he wrote. So I didn't have the courage to say, 'What about this, what about that,' I just wanted to know if I had permission to try." The series debuts at 8 p.m. CDT today, with Winona Ryder, Zoe Kazan, John Turturro, Morgan Spector and Anthony Boyle in the cast.