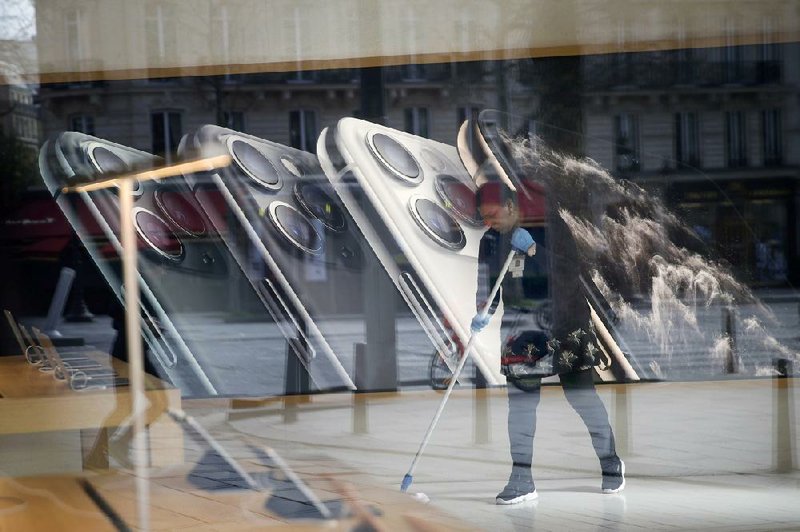 A worker sweeps inside the Apple Store on the Champs-Elysees in Paris on Sunday. French regulators fined Apple $1.2 billion on Monday over a non-compete agreement with two companies. (AP/Christophe Ena)

Apple Inc. on Monday was fined a record $1.2 billion by French antitrust regulators after the U.S. tech giant was criticized for anti-competitive agreements with two favored distributors.

The French agency said Apple conspired with two wholesalers -- Tech Data and Ingram Micro -- in a move that thwarted wholesale competition for non-iPhone products such as Mac computers. The wholesalers also face fines of $85 million and $70 million.

"Apple and its two wholesalers agreed to not compete against each other and prevent resellers from promoting competition between each other, thus sterilizing the wholesale market for Apple products," Isabelle de Silva, head of the French agency, said in a statement on Monday.

Calling the fine "disheartening," Apple defended its operations in a statement saying its "investment and innovation supports over 240,000 jobs across the country."

Apple added that the decision "relates to practices from over a decade ago and discards thirty years of legal precedent that all companies in France rely on with an order that will cause chaos for companies across all industries."

The fine comes after Apple said Saturday it's closing its hundreds of retail stores outside of Greater China until March 27 and is moving to remote work to help reduce the spread of coronavirus.

Apple Inc. shares tumbled Monday as the company's decision "marks an escalation in the impact of covid-19 on both Apple and our coverage more broadly," according to Credit Suisse.

The stock declined as much as 14% in its biggest one-day intraday percentage drop since May 2010.

Apple said the French decision "will cause chaos for companies across all industries" and vowed to appeal.

The tech firm said it believes customers should be allowed to choose the product they want, either through Apple Retail or its large network of resellers across the country.

Monday's fine dwarfs the previous record antitrust penalty in France for a single company -- $390 million, which was handed down to Orange SA in 2015.

The combined penalty for Apple and the two wholesalers is also a record, topping the $1 billion fine in 2014 that was split among 11 shampoo and toothpaste makers, including L'Oreal SA.

The French regulator said the Apple case was prompted by a complaint lodged by eBizcuss, an Apple premium reseller, in 2012.

Antitrust officials say Apple's actions froze market shares and prevented competition among different distribution channels for the brand. Apple allegedly took measures to force premium resellers to provide the same prices as it did in Apple Stores and on its website.

The tech company also created an economic dependency for premium resellers, France's Autorite de la Concurrence said. The resellers were contractually obliged to sell nearly only Apple products yet at times were not supplied with new products even when they were available on Apple's website or in its stores.

Information for this article was contributed by Gaspard Sebag, Helene Fouquet and Ryan Vlastelica of Bloomberg News; and by staff members of The Associated Press.