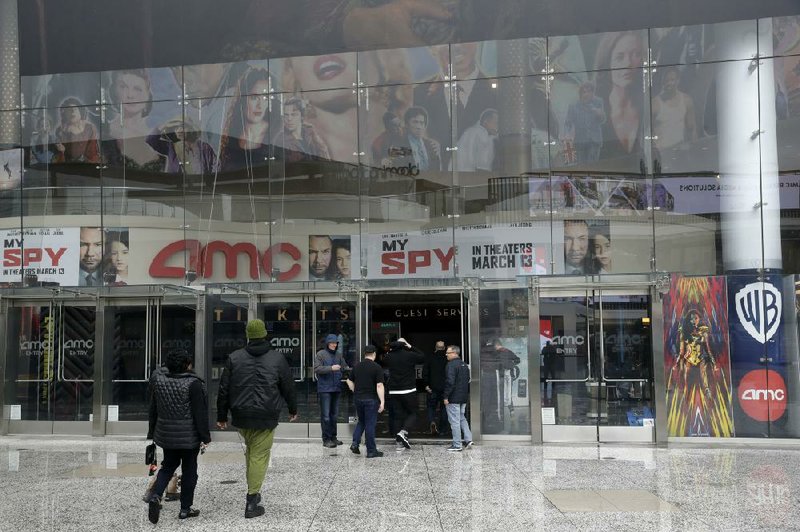 People enter an AMC theater on Saturday in Los Angeles. Limited access to theaters because of the coronavirus pandemic should mean a spike in online video streaming services, analysts say. (AP/Marcio Jose Sanchez)

LOS ANGELES -- Since the days of VHS and DVD rentals, cinema executives have worried that potential customers would choose to watch movies at home.

Now they fear the coronavirus pandemic could be a point of no return.

The National Association of Theater Owners has insisted that streaming services are not a threat. "Through every challenge, through every new technology innovation over the last 20 years, theatrical admissions have been stable and box office has consistently grown," John Fithian, the association's chief executive, said in a January news release titled "Theater owners celebrate a robust 2019 box office." Ticket sales in North America totaled $11.4 billion, down 4% from a record-setting 2018.

Many analysts, however, see a very different picture. Looking at the past 20 years of attendance figures, the number of tickets sold in North America peaked in 2002, a year with installments of two hit trilogies -- Star Wars and Lord of the Rings -- as well as the first Spider-Man movie and the first Harry Potter sequel. That year, cinemas sold about 1.6 billion tickets.

In 2019, attendance totaled roughly 1.2 billion, a 25% drop -- even as the population of the United States increased roughly 15%. Cinemas have kept ticket revenue high by raising prices, but studio executives said there is limited room for continued escalation.

Offerings in theaters may also grow more constrained. Even before the pandemic, major studios were starting to route smaller dramas and comedies toward streaming services instead of theaters.

And now comes the coronavirus, which has prompted people to bivouac in their homes, theaters to put in place social-distancing restrictions, and studios to postpone most theatrical releases through the end of April. Rich Greenfield, a founder of the LightShed Partners media research firm, predicted that the disruption would speed the ascendance of streaming.

"The behavior was already shifting, but this hits the accelerator pedal," Greenfield said. "I think most of the global exhibition business will be in bankruptcy by the end of the year."

As studios have postponed theatrical releases such as Mulan and No Time to Die, they have been careful to express loyalty for theaters.

"We believe in and support the theatrical experience," Paramount Pictures said in a statement Thursday.

But a question looms: Could the pandemic hasten long-brewing changes in the way that new movies roll out?

Most movies still arrive the same way they have for decades. They appear first in theaters, for an exclusive run of about 90 days, and then in homes. Theater chains including AMC, Regal and Cinemark have fought off efforts to shorten the exclusivity period. They worry that people will be reluctant to buy tickets if they can see the same film on their living room television set or iPad screen just a few weeks or days later.

Many entertainment companies, however, are eager to shorten that exclusive window and make some films available on their streaming platforms, in part to reduce marketing costs.

With the masses staying at home, ticket sales dropped precipitously over the weekend, even though two high-profile new films, Bloodshot and The Hunt, arrived in wide release. Each was supported by a marketing campaign costing tens of millions of dollars, and the money had already been spent by early last week, when the pandemic intensified in the United States and studios started to postpone releases planned for later in the month.

Cinemas will soon run out of high-profile new films to show. Studios like Disney, Universal, Sony and Paramount all postponed films scheduled for release this spring, including The New Mutants, Peter Rabbit 2: The Runaway and F9, the ninth chapter in the Fast and Furious series.

Theater chains in the United States are doing anything they can to avoid shutting down. AMC Entertainment, the No. 1 multiplex operator in North America, said Friday that it would reduce the number of theatergoers allowed in all of its auditoriums by 50% so that people could leave at least one empty seat between each other. No auditorium would offer a capacity beyond 250, the company said -- a threshold that some states, including California, have said group activities should not exceed until the pandemic eases.

AMC said its restrictions would last until April 30. The company seemed to indicate that it was making the move to avoid possible government intervention; some chains in Europe have been forced to close entirely.

The Cineworld Group, which owns Regal Entertainment, followed AMC and reduced its auditorium capacity by half. In a statement, Regal said it was "complying, where applicable, with state mandates on social gathering limits. We welcome moviegoers into our theaters!" Mooky Greidinger, Cineworld's chief executive, told analysts Thursday during a year-end earnings discussion that the company had so far experienced a "minimal" effect from the pandemic but that Cineworld would be unable to pay its debts if people started to stay home in droves.

Cinemark, the No. 3 chain in the United States behind Regal, referred questions to the National Association of Theater Owners, which declined to comment. Alamo Drafthouse, a Texas-based chain with about 40 locations, required social distancing at some theaters while closing others outright.