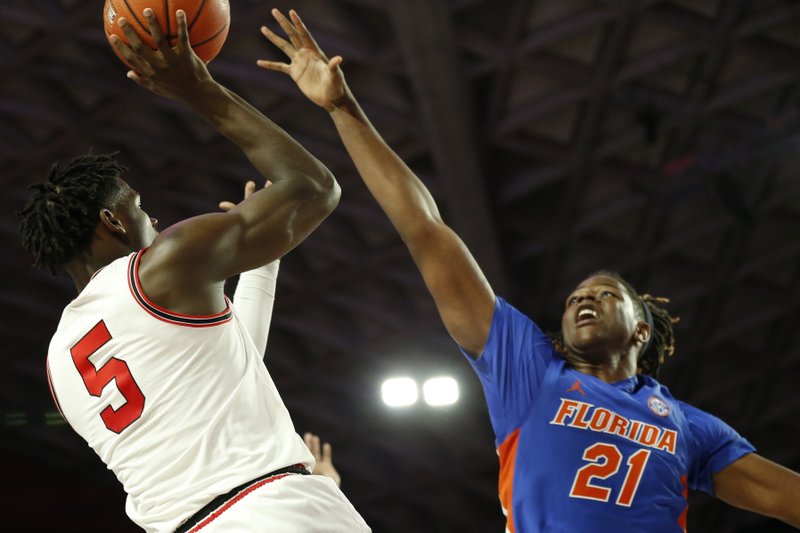 Florida forward Dontay Bassett is looking to transfer after playing in 17 games this season. School officials said Monday that Bassett has entered the NCAA transfer portal and will have immediate eligibility elsewhere next season as a graduate transfer. A 6-foot-9 junior from Oakland, Calif., Bassett played behind fellow big men Omar Payne and Jason Jitoboh -- both freshmen -- this season and was on the court sparingly during SEC games. Bassett averaged 1.2 points, 1.7 rebounds and 6.7 minutes. Bassett's decision leaves the Gators with 10 returning scholarship players for next season, including eligible transfers Anthony Duruji and Tyree Appleby. Florida has three newcomers on the way: Shooting guard Niels Lane, power forward Osayi Osifo and small forward Samson Ruzhentsev.

Britain's anti-doping body is expected to look into allegations in a newspaper report in which a farmer said he was offered money to provide an alibi in support of Tyson Fury for a case involving the world heavyweight champion. Fury and his cousin Hughie Fury were handed retrospective two-year bans by UK Anti-Doping in 2017 after initially testing positive in 2015 for nandrolone, which they blamed on eating uncastrated wild boar meat. In the case, farmer Martin Carefoot said he provided the Furys with wild boar. But he has backtracked in an interview with British newspaper The Mail on Sunday, saying he was offered nearly $31,000 to make up the story in order to aid their case. Boxing promoter Frank Warren, who currently works with Tyson Fury, has described the farmer's claims as "outrageous" and "a load of rubbish."

Second baseman Joe Panik was added to the 40-man major league roster by the Toronto Blue Jays on Monday. Toronto selected the contract of the 29-year-old from Class AAA Buffalo and placed right-hander Yennsy Diaz on the 60-day injured list with a right lat strain. Panik gets a one-year contract paying a $2.85 million salary while in the major leagues and a $195,000 salary in the minors. He can earn $150,000 in performance bonuses based on plate appearances: $50,000 each for 400, 450 and 500 plate appearances. Panik hit .381 with a triple, 2 home runs and 5 RBI in 21 at-bats over 10 spring training games. The left-handed hitter batted .244 with 5 home runs and 39 RBI in 438 at-bats last year for the San Francisco Giants and New York Mets. Panik became a free agent after the season and agreed to a minor league deal with the Blue Jays in January. He has a .271 average with 38 home runs and 233 RBI in 6 seasons with the Giants and Mets. He was an All-Star in 2015.