Coronavirus cases rise to 37 in state 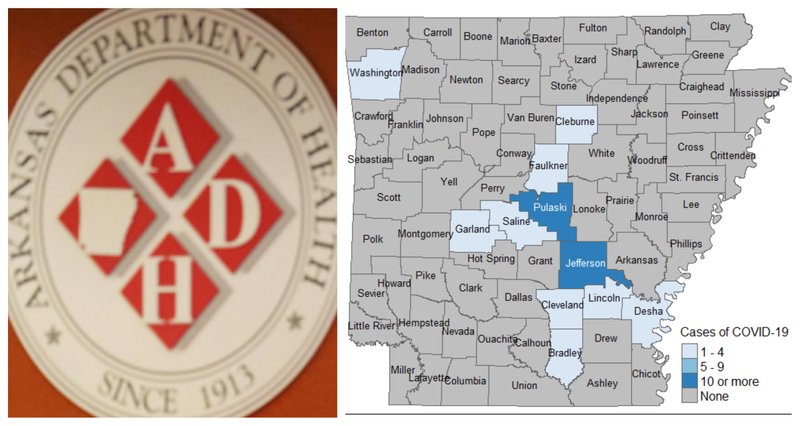 The Arkansas Department of Health logo is shown next to a map detailing the latest numbers of covid-19 cases by county in the state.

The Arkansas Department of Health reported the increase in positive cases shortly after 7:30 p.m.

Pulaski and Jefferson counties each have at least 10 positive cases while Bradley, Cleburne, Desha, Cleveland, Faulkner, Garland, Lincoln, Saline and Washington counties all have between one and four confirmed cases.

Arkansas saw the largest one-day jump in the number of cases of covid-19 from Tuesday to Wednesday as 11 new patients tested positive for the virus, Gov. Asa Hutchinson said.

The governor also said that the state will be making more assistance available for child care centers and other businesses affected by the virus.

The total number of covid-19 cases in Arkansas is now 33.

Cases were detected for the first time in Washington, Faulkner and Bradley counties.

Health Secretary Dr. Nate Smith said most of the new cases were travel-related or connected to other known cases. He said investigation of all the new positives had not been completed as of the 1:30 p.m. news conference so he could not confirm there are no new cases of unknown origin, also called community spread.

One case in Little Rock last week was confirmed to be community spread.

Officials said Wednesday that an increased number of cases is expected in the coming days as more testing becomes available.

Hutchinson also cautioned Arkansans from experiencing a “false sense of security” if a day goes by with no new cases, as happened Tuesday.

With regard to making more assistance available, the governor said that the state is working to allocate $12 million in federal Community Development Block Grant funds to help companies and nonprofits, with an emphasis on hospitals and other businesses essential to the coronavirus response.

Hutchinson said he will also allocate $4 million for the state's quick action closing fund to provide loans of up to $250,000 to help businesses make payroll and stay in operation.

The state has also requested a disaster declaration from the Small Business Administration that would open up loans of up to $2 million to provide working capital for businesses.

State Department of Human Services Secretary Cindy Gillespie said the state is also providing extra money through vouchers to child care centers and relaxing requirements on capacity. The state will also suspend renewal requirements for parents with vouchers for 30 days. It is also providing a "mass good cause exemption" from the food stamp program's work requirement through May so that people don't lose benefits.

Eight Arkansans have tested positive for the coronavirus since Tuesday morning, bringing the total number of cases in the state to 30, according to the state Department of Health's website.

Two people in Faulkner County have tested positive for the coronavirus in a travel-related case, state Rep. Stephen Meeks said on his Facebook page.

"I just received notice from the Governor's office that 2 people in Faulkner County tested positive for COVID-19 and that it is travel related," Meeks, R-Greenbrier, wrote.

He said the state Department of Health "is working with the patients to contact those whom they may have come in contact with."

The cases are the first reported in that county. As of Tuesday, 22 Arkansans had tested positive. Officials in Washington County in Northwest Arkansas also said Wednesday they had been notified of a case in that county.

FAYETTEVILLE -- Northwest Arkansas has its first presumptive case of covid-19, according to a news release from Mayor Lioneld Jordan and Washington County Judge Joseph Wood.

"We will continue to monitor the situation and respond accordingly. We urge the public to follow all recommendations of the Arkansas Department of Health," the news release states.

Check back for updates and read Thursday's Arkansas Democrat-Gazette for full details.