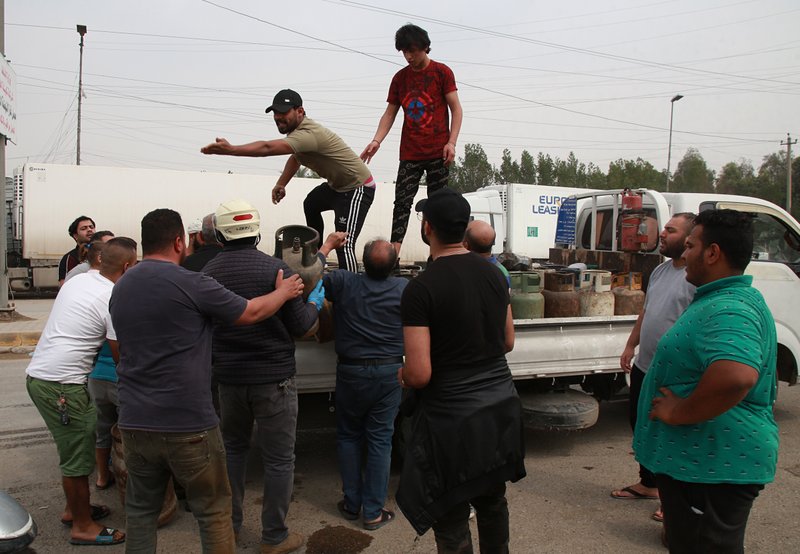 Iraqis gather to buy cooking gas canisters in downtown Baghdad, Iraq Monday, March 16, 2020. Iraq announced a weeklong curfew to help fight the spread of coronavirus, late Sunday. People raced to supermarkets and swiftly emptied shelves, while others stocked up on cooking fuel. The curfew, which is set to begin late Tuesday, includes the suspension of all flights from Baghdad's international airport. (AP Photo/Khalid Mohammed)

BAGHDAD -- Iraq's president Tuesday named a former governor of the city of Najaf as prime minister-designate, following weeks of political infighting, as Baghdad residents rushed to stock up on supplies hours before a dayslong curfew was set to take hold amid a global pandemic.

Adnan al-Zurfi was appointed premier-designate by President Barham Saleh after tense meetings between rival political blocs. The meetings went on for weeks without reaching a consensus on a candidate to replace outgoing Premier Adel Abdul-Mahdi. Hours after the announcement, Iraq's powerful Fatah parliamentary bloc rejected al-Zurfi's candidacy signaling a rocky path to government formation for the new premier-designate.

Fatah, headed by Hadi al-Ameri, garnered the second highest number of seats in parliament in the May 2018 federal election.

In a statement, the bloc accused Saleh of "disregarding" the constitution and naming al-Zurfi in the absence of political consensus. "The president of the republic shall endure full responsibility for the repercussions of this provocative step."

"We will take all measures to prevent this disregard of the law and constitution," the statement said.

Al-Zurfi, 54, was appointed by Iraq's U.S. administrator Paul Bremer as governor of Najaf in 2004 and later served in the same post between 2009 and 2015. His third term was cut short following his dismissal by the provincial council. In the May 2018 election he won a seat in parliament under former Prime Minister Haidar al-Abadi's list.

According to Iraq's constitution, al-Zurfi has 30 days to propose a lineup of ministers and form a new government. Saleh wished al-Zarfi success "in his new tasks to work for early and fair elections and to achieve the aspirations of the Iraqis," according to a statement from his office.

Early elections have been a key demand of anti-government protesters camped out in the capital's Tahrir Square. Last October, thousands took to the streets to decry government corruption, poor services and unemployment. Abdul-Mahdi resigned under pressure from the demonstrations.

Subsequently, Allawi's efforts to form a government were plagued with delays and dysfunction as legislators failed on two occasions to approve his Cabinet of independents, which alienated Iraqi Kurdish and Sunni lawmakers.

Al-Zurfi's appointment came hours before am 11 p.m. curfew imposed because of the coronavirus pandemic was to take effect in Baghdad.

The fate of the six-month protest movement has also come into question amid the strict protocols prohibiting large public gatherings. In a collective statement, demonstrators in Tahrir Square, the hub of the movement, said they were suspending protest activities.

Information for this article was contributed by Qassim Abdul-Zahra in Baghdad of The Associated Press.