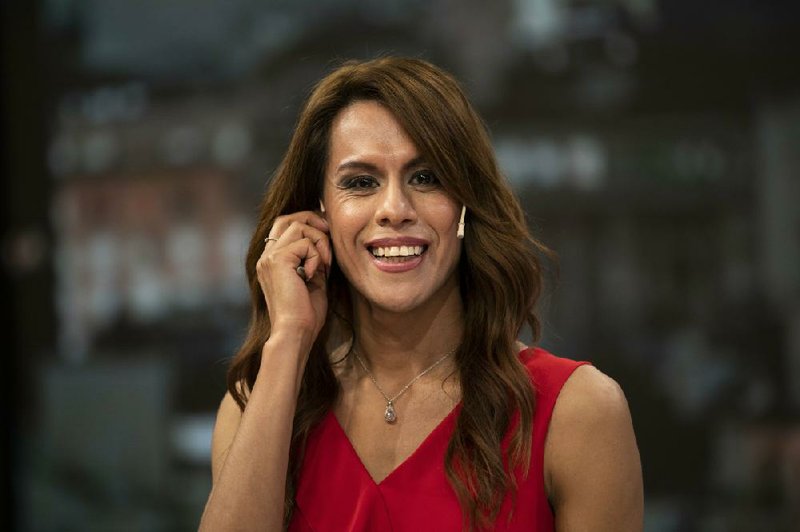 In this March 5, 2020 photo, Diana Zurco smiles during a rehearsal for her debut as the country's first transgender newscaster, in Buenos Aires, Argentina. Her job as a co-anchor of Public Television's prime time evening news program is a milestone for an excluded community that is often the target of violence and has a life expectancy roughly half that of the rest of the population. (AP Photo/Victor R. Caivano)

• Actor Tom Hanks and his wife, Rita Wilson, have both been released from an Australian hospital and will remain in self-isolation after being treated for covid-19, the disease caused by the coronavirus, their son said in a video statement late Monday. "They're still self-quarantined obviously, but they're feeling a lot better so that's a relief," their son Chet Hanks said in a video posted on Instagram. Hanks and Wilson, both 63, said they tested positive for the coronavirus on March 10. Queensland state's health department would not comment on media reports that the celebrities had been discharged from the Gold Coast University Hospital to self-isolate in a rented house. The couple arrived in Australia in late January where an Elvis Presley biopic directed by Baz Luhrmann was to be shot. Hanks plays Presley's manager, Colonel Tom Parker. The film, set for release in October 2021, has suspended production, Warner Bros. said. Wilson, a singer-songwriter, has performed in Brisbane and Sydney during the couple's stay in Australia. Australian television journalist Richard Wilkins has revealed that he tested positive for the virus on Sunday. He had met Wilson at the Sydney Opera House on March 7 and again at Nine Network's Sydney studio two days later. Two Nine hosts who interviewed Wilson on live television on March 9, David Campbell and Belinda Russell, returned to work on Tuesday after testing negative. They had been in home isolation since Wilson's diagnosis.

• Diana Zurco did not attend her high school graduation because she refused to receive a diploma with her birth name. At 17 and considered a boy by school officials, she grew her hair long and adopted the name Diana after the alien character on the show V about an extraterrestrial invasion. Now 40, Zurco recalled her youthful rebellion in the studio of Argentina's public television station ahead of her debut as the country's first transgender newscaster, a milestone for an excluded community that is often the target of violence and has a life expectancy roughly half that of the rest of the population. Argentina's government estimates the country has between 12,000 and 13,000 transgender adults out of a population that exceeds 44 million. "My presence challenges society," Zurco said on Monday when she began her job as co-anchor of Public Television's prime time evening news program. "It is an invitation to society that says: 'This is me. Behind me there are more people like me who want to express themselves. We are capable. We can study. We can train ourselves. We can communicate to you what is happening in our country.'"