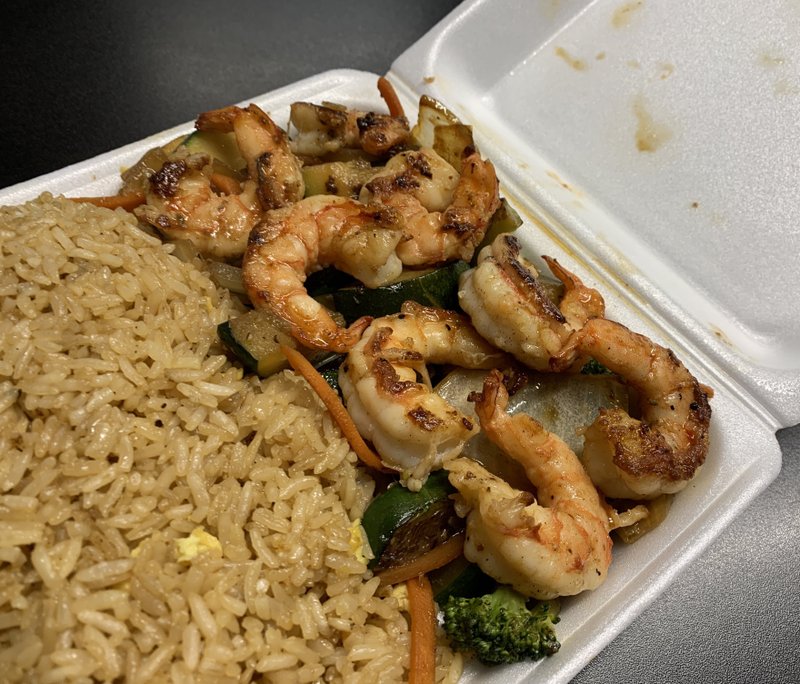 Hibachi meals, including the Hibachi Shrimp, come atop a base of mixed vegetables (zucchini, broccoli, carrot and onion) with a copious portion of “eggs fried rice” at Bamboo Hibachi on North Little Rock’s Camp Robinson Road. (Arkansas Democrat-Gazette/Eric E. Harrison)

On its Facebook page, Bamboo Hibachi proclaims that it "serves excellent quality Hibachi style food fresh made to order and quality Sushi at value pricing! and also generous portion."

All of that is true. Without hyperbole.

We weren't sure what to expect. We had been curious as to how, for example, the new restaurant would adapt the former Mexico Chiquito to install a sushi bar and teppanyaki hibachi tables — a complicated and expensive proposition, considering each table would require its own vent-a-hood.

Well, it didn't. All the cooking at Bamboo Hibachi takes place in the closed kitchen. There's no show — no teppanyaki chefs creating onion volcanoes, flashing knives and flipping shrimp tails into people's pockets. You can't watch the sushi chef slice and dice.

We ordered at the counter, paid and got a number. About 10 minutes later, the young woman at the counter — who, deftly during a recent rush handled with aplomb a crowd trying to place orders, taking more orders over the phone, pouring soft drinks and handing finished products to patrons — called out our number and we collected our food.

Everything at Bamboo Hibachi is packaged to go, whether you're planning to consume it elsewhere or in the L-shaped dining room, which seats about 75 at composite-topped tables. In fact, the young counter woman never so much as asked. There's no working drive-thru window (Mexico Chiquito-era outdoor menu and window are boarded up), but in this era of illness, it's a plus to be a grab-and-go operation. It also helps the place keep prices down. Even the Hibachi Lobster, the priciest thing on the menu, is only $18.25. No sushi roll is more than $9.

Speaking of sushi rolls, they come in covered plastic plates. Our hibachi meals and appetizers came in foam clamshells. In some cases, it's actually an advantage — you don't need a separate plate for disposing of edamame shells, just drop 'em in the top part of the box.

Having experienced less than thrilling food at similar operations in the area that have "hibachi" in their names but shall otherwise remain nameless for the purposes of this review, we were very pleasantly surprised by how good the food was at Bamboo Hibachi.

Starting with our two hibachi entrees, both of which were huge portions, as promised. Hibachi Shrimp ($9.99) is eight medium-size, firm hibachi-grilled shrimp without tails. Hibachi Yummy Beef (also $9.99) wasn't, perhaps, that yummy, but we enjoyed hunting and pecking out the small shreds of grilled beef in an ever-so-slightly salty teriyaki sauce.

Both shrimp and beef come atop a base of mixed vegetables (zucchini, broccoli, carrot and onion) with a copious portion of "eggs fried rice." Given our noted disdain for zucchini, we left a lot of our vegetables behind. The rice, however, was as good as we've had anywhere around here, and after the first bite, we stopped wondering whether it would be worth the $2 upgrade to noodles. ("Extra eggs on your meal" costs another $1).

Alcoholic beverages: Not yet

Bamboo Hibachi's sushi consists only of rolls, divided into "deep-fried" (11), "regular" (eight) and "special fried" (four). We chose our two — the "special fried" Tokyo Roll ($8.99) and the "deep fried" Arkansas Roll ($7.75) — based on their ingredients; when we got them back to our office, we were surprised by how much they resembled one another. But they were both enormous and tasty in different ways — the former encompassing smoked salmon, fried crab and cream cheese in a slightly sweet sauce, the latter wrapping fried tempura shrimp, crab and cream cheese in a tangier, slightly citric sauce.

We got a good-size portion of edamame ($4.20) with a very light amount of salt — just the way we, and our blood pressure, like it. Gyoza (six dumplings for $3.50) were crisp and enjoyable but missing any dipping sauce.