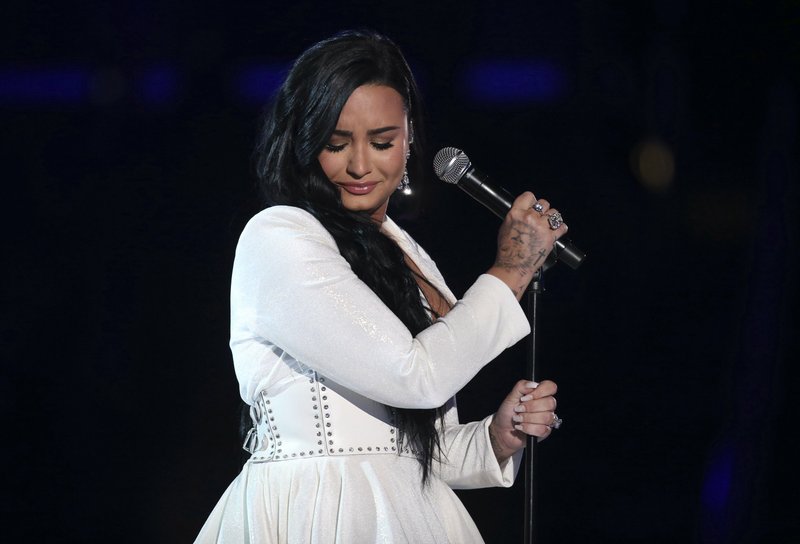 Demi Lovato, seen here performing at the 62nd annual Grammy Awards in January, has struggled for years with an eating disorder and eventually ended up in the hospital after a drug overdose. After rehab and hiring a new management team, Lovato is on the road to a healthy recovery. (Invision/AP/Matt Sayles)

Demi Lovato has opened up in recent interviews about how she was under extreme pressure to maintain a certain body type, leading up to her relapse on drugs and alcohol and to her reported near-fatal overdose on opioids in July 2018. In this way, the 27-year-old singer is describing a well-known link between eating disorders and substance abuse.

Lovato told Ellen DeGeneres that she first got sober at 19. She said she had assumed she had gotten the help she needed. But she hadn't, and her eating disorder worsened. "So I was stuck in this unhappy position. And here I am sober, and I'm thinking to myself, 'I'm six years sober, but I'm miserable,'" Lovato told DeGeneres while sharing a clip from her forthcoming single, "I Love Me."

"I'm even more miserable than I was when I was drinking," Lovato said. "Why am I sober?" Lovato said her misery was exacerbated by the team around her who tried to fiercely control her access to food. "If I was in my hotel room at night, they would take the phone out of the hotel room so I couldn't call room service, or if there was fruit in my room they took it out because that's extra sugar," Lovato told DeGeneres. "We're not talking about brownies and cookies and candies and stuff like that, it was fruit."

When Lovato tried to let her team know that she was struggling, she said members told her, "You're being very selfish, this would ruin things for not just you but for us as well." These messages, she said, fed her "core issues of abandonment from my birth father as a child." Feeling abandoned by this rejection, Lovato said she started drinking again. "That night, I went to a party and there was other stuff there, and it was only three months before I ended up into the hospital with an OD," Lovato told DeGeneres.

Reports in 2018 said that Lovato had been in a downward spiral for several months, during which she publicly admitted that she had relapsed. On July 23, 2018, she went to a birthday party at a West Hollywood club on the Sunset Strip, TMZ reported at the time.

Early the next morning, she contacted a drug dealer she had been using for several months to come to her home, TMZ said. The two freebased Oxycodone, but the opioids also were laced with Fentanyl, TMZ added. Fentanyl, a synthetic opioid, is similar to morphine and heroin but is 50 to 100 times more potent. Fentanyl was implicated in the deaths of Prince and Lil Peep.

The dealer fled the house after noticing Lovato passed out in bed, breathing heavily, TMZ reported. Someone from Lovato's staff found her in bed several hours later. Either someone from her staff or responding paramedics administered Narcan, a medication designed to rapidly reverse an opioid overdose. The overdose put Lovato into Cedars-Sinai Medical Center for two weeks, where she reportedly suffered serious complications, including extreme nausea, high fever and other ailments.

Nearly two years later, Lovato told DeGeneres that she has come to realize that her eating disorder was her "primary problem" but then "it turned into other things." At the same time, she said she felt her life was being controlled by so many people around me. "When you have certain people around you that are telling you certain things, that you should look a certain way, it makes it harder," Lovato added in an interview in February with model Ashley Graham for Graham's Pretty Big Deal Podcast, People reported.

"I was just running myself into the ground, and I honestly think that's kind of what led to everything happening over the past year," she told Graham. "It was just me thinking I found recovery when I didn't, and then living this kind of lie and trying to tell the world that I was happy with myself when I really wasn't."

As Lovato went to rehab and began to recover, she developed a more comfortable relationship with food, as she told DeGeneres. For one thing, she said she hired a new team who don't micro-manage her food consumption and let her enjoy birthday cake.

"This year, when I turned 27 — I have a new team — Scooter Braun, my manager, gave me the best birthday cake, and I spent it with Ariana Grande, who is one of my good friends. And we just had the best birthday," Lovato said. "I just remember crying because I was finally eating cake with a manager [who] didn't need anything from me and [who] loved me for who I am and supported my journey."