Builders’ confidence shown to be starting on a downward path in March survey by COMPILED BY DEMOCRAT-GAZETTE STAFF FROM WIRE REPORTS | March 19, 2020 at 2:05 a.m. 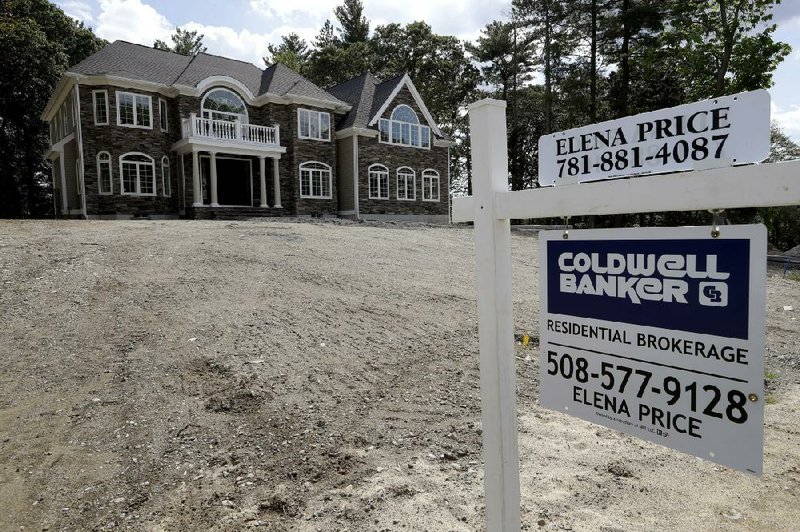 A sign stands in front of a new home in Westwood, Mass., in this photo from September. Construction of new homes fell again in February 2020, but not as much as the previous month. (AP)

WASHINGTON -- Construction of new homes fell again in February, but not as much as the previous month. Those declines come after a December surge that had pushed home construction to the highest level in 13 years.

Builders started construction on 1.60 million homes at a seasonally adjusted annual rate, a decline of 1.5% from 1.62 million units in January, the Commerce Department reported Wednesday. Analysts had expected a more significant drop. The economic impact of the coronavirus outbreak was not apparent in the February numbers.

Application for building permits, considered a good sign of future activity, fell 5.5% in February to an annual rate of 1.46 million units. However, permits for single-family home construction rose 1.7%.

"Single-family building permits rose for the tenth consecutive month to a cycle high of 1.004 million," said Neil Dutta, an economist at Renaissance Macro Research. "Thus, the housing market was really hitting its stride before the onset of the coronavirus in the United States. That said, with homebuilder sentiment easing March, expect the gains in permits and construction to ebb in the months ahead."

Private data released Tuesday showed sentiment among homebuilders fell to a four-month low in March as expectations for sales in the next six months declined. However, National Association of Home Builders chief economist Robert Dietz said the rising economic impact of the coronavirus will likely be reflected more fully in the April report.

The report on housing starts showed that homebuilding declined the most in the Northeast, falling 25.1%, followed by a 8.2% drop in the West. Homebuilding fell modestly in the South.

The group said that builder confidence reflected a decline in mortgage rates, a low supply of existing homes and a strong labor market with rising wages and the lowest unemployment rate in a half century. But that could change drastically in the coming months as American industry braces for the impact of covid-19, which is grinding the economy to a near halt as people stay home, airlines cancel flights and public events are called off.

"Due to the slowdown in economic growth and the volatility in markets from the coronavirus, mortgage rates will remain lower for longer, which will help homebuyers in the longer run," said Joel Kan of the Mortgage Bankers Association. "However, we may start to see these homebuilding trends take a turn for the worse, depending on the industry's ability to continue day-to-day operations during these difficult times."

The average rate on a 30-year-fixed mortgage ticked up slightly to 3.36% last week from 3.29% the previous week, which was the lowest level since mortgage buyer Freddie Mac started tracking the average in 1971. It could fall further this week after the Fed on Sunday slashed its benchmark rate to nearly zero.

Despite a months-long slump in mortgage rates, a deterioration in the job market will probably weigh on demand and eventually limit residential construction.

Information for this article was contributed by Matt Ott of The Associated Press and by Reade Pickert of Bloomberg News.