Half of Arkansas at enhanced risk for severe weather today 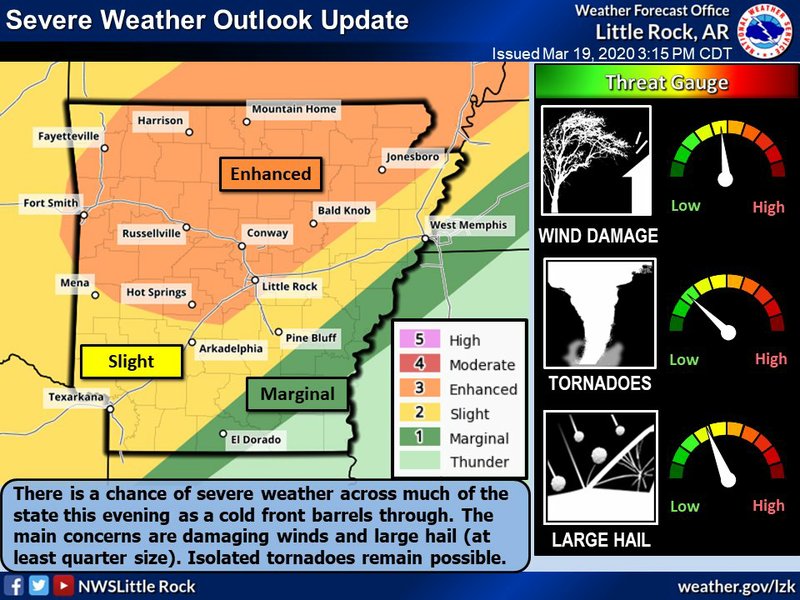 About half of Arkansas is at an enhanced risk for severe weather Thursday afternoon and evening.

The rest of the state is at a slight or marginal risk, except the far southeast corner of Arkansas.

The portion of Arkansas now facing an enhanced risk of severe weather Thursday has expanded to include Little Rock.

About two-thirds of Arkansas is at a slight-to-enhanced risk for severe weather Thursday, according to the National Weather Service.

Most of the state including northwestern and southeastern areas, as well as Little Rock, are at a slight risk for severe weather. Northeastern Arkansas and parts of the central region, including Conway, are at an enhanced risk.

Southern and western portions of the state are at a marginal or no risk, according to the weather service.

The main concerns with the storms are damaging winds and large hail, though forecasters said isolated tornadoes are also possible.

Storms are expected early in the day, followed by a brief lull in the late morning before they redevelop in the afternoon and continue through the evening, forecasters said.

A flash flood watch is in effect for western and northern Arkansas on Thursday. Many areas are expected to get one to two inches of rain on ground that is already nearly saturated, according to the weather service.

After the storm system passes through the state Thursday, temperatures are expected to be colder, the weather service said. Highs on Friday will be in the 50s in Northwest Arkansas and in the 60s in central areas.

Friday night is expected to see temperatures fall to around 40 in Central Arkansas and to the upper 20s in northwestern areas.