Noriko (Setsuko Hara) prefers caring for her aged father, an eminent college professor, to looking for a husband in Yasujirô Ozu’s 1949 Late Spring, which is now streaming on the Criterion Channel.

In order to provide the most utility, we'll take the original (editor's note: award-winning) 30x30 concept and tweak it a bit: We'll focus on a variety of genres from week-to-week to keep our bases covered -- everything from westerns to sci-fi, indie dramas, art house oddities, and, yes, musicals. Also, every movie I list here is available in streaming format (listed). Set your mood and take your pick: Eventually, there will be something for nearly everyone.

1. Late Spring (1949): Yasujirô Ozu's film, about an aging widowed professor, Somiya (Chishu Ryu), whose beautiful, vibrant 27-year-old daughter Noriko (Setsuko Hara) would rather stay with him than go off to marry someone else, plays in retrospect like a perfect analogy for the changing of the cultural guard in post-WWII Japan. There is nothing wrong with Noriko, despite the worries of her aunt (Haruko Sugimura) that she's not finding a man. As she puts it, she is perfectly content with her current life, doting on her father, and spending time with her friends in Tokyo. She believes she won't be any happier in a marriage and becomes visibly upset and glum when her Aunt forces the issue and insists she meet a man (who she describes as looking like Gary Cooper from the jaw to the nose) she has selected for her. When her beloved father tells her he plans on remarrying himself, suggesting there will be no place for her in his new life, she feels as if she has no choice but to comply, a decision that ultimately leaves both of them sad. Ozu takes pains to show the constancy of nature -- many transitions between scenes are highlighted by images of trees, flowers, and the ocean, unchanged by petty human mortality -- as well as the old cultural mores of a country ripped apart by war (many American influences are subtly and not so subtly referenced, including everything from a kids baseball game to a conspicuous "Coke" sign), and trying to reset itself into an uncertain future. Focusing the drama on two people whose selflessness becomes increasingly heartbreaking as they try to do right by each other, Ozu's film cuts pretty deep, and never more so than in the film's penultimate shot involving a single piece of fruit. Apples have never been more devastating, even in the garden of Eden.

2. Rio Bravo (1959): A classic John Wayne Western, as directed by Howard Hawks, in which Wayne plays the taciturn sheriff of a town besieged by a pair of bad brothers (Claude Akins and John Russell), one of whom he arrests, while the other plans various ways to break him out of jail before the U.S. Marshal arrives. As with most successful westerns, half the fun comes from watching the crew of heroic protagonists comes together: In this case, Wayne's John T. Chance has the services of an old, gimpy coot named Stumpy (Walter Brennan, pouring it on thick); his former deputy turned town drunk, "Dude" (Dean Martin), and a young, swaggy kid he dubs "Colorado" (Ricky Nelson, in full teen-idol mode). Given such a motley crew, against a slew of "professionals," as always, it's Wayne's force of personality that mostly gets them through. Notably, this film was, in large part, a response to Gary Cooper's distraught sheriff in High Noon, in which he alone has to face a pack of killers after his call for the other men in his town to aid him goes unheeded. In this, you can certainly see the political implications for Wayne and Hawks, both hard-line Republicans, who preferred their heroes stand on their own spurs, rather than enlist the aid of others (which obviously reeks of socialism). The film has some solid moments -- and, naturally, the obligatory musical interlude with Martin and Nelson, a pair of world-class crooners -- along with its machismo. Angie Dickinson does a solid turn as Wayne's love interest, a former burlesque performer dubbed "Feathers," quite literally half his age, which doesn't, as they say, age particularly well, but Hawks' focus on the interplay of the characters, rather than the plot, allows the leads a chance to show their chops, and makes for some lively, spirited dialogue: After Chance and Feathers fumble with their first kiss, they give it another go, "I'm glad we tried a second time," she purrs. "It's better when two people do it."

3. The Blackcoat's Daughter (2015): A teenage student of a prestigious female Catholic boarding school steps into a darkened basement hallway, everything shrouded in shadows. She flicks on a light switch, which surprisingly activates a pair of naked fluorescent bulbs along the wall, creating a stark contrast to the lightened section of the hallway, and the now even-darker section that lies beyond it. While it would seem as if this would alleviate the creepy atmosphere of the scene, it actually enhances it. Osgood Perkins' unsettling film utilizes this idea of high contrast to strong psychological advantage throughout the proceedings. Time and again characters are shown in front of a nearly blindingly bright window behind them, shrouding their faces so they can barely be seen. The story concerns a pair of young women whose parents don't come to pick them up from the school for winter break -- one, on purpose, as Rose (Lucy Boynton) intentionally gave them the wrong date so she could go on a date; the other, Kat (Kiernan Shipka), decidedly not, leaving the unhappy freshman to her own devices -- and the horror that ensues for both of them, as a third young woman, Joan (Emma Roberts), seemingly unconnected escapes an institution and befriends an older couple at a bus station. Made with exceeding patience and care, the first third of the film strolls along at its own pace, which perfectly sets up the gruesome and profoundly disturbing final act. Made half a decade ago, it features a splendidly macabre performance from Shipka, the former Mad Men actress showing estimable range, and a script impressively convoluted. Just note the violence in this one is deeply disturbing and realistic, so be prepared.

4. His Girl Friday (1940): Our second Howard Hawks selection on this list is one of his most enduringly popular efforts, one that has been mined for pop culture references ever since -- from The Simpsons to the Coen's The Hudsucker Proxy -- and it's easy to see why. The whip-smart script by Charles Lederer (based on the Broadway show The Front Page) pits Cary Grant, as fast-talking, completely dishonorable newspaper editor Walter Burns, against Rosalind Russell's equally fast-talking, shrewd reporter Hildy Johnson, his ex-wife, as they match wits and barbs after she comes back from a vacation with a good-natured but dull fiance (Ralph Bellamy) in tow. She returns to say goodbye to the journalist life, right as one of the biggest news stories in New York breaks, giving Burns the opportunity to ensnare her back into the job, and into his heart. Despite some dicey racist bits -- the casual manner in which it's displayed is almost jaw-dropping at this point -- the film's rapid-fire pitter-pat exchanges (Hildy: "I wouldn't cover the burning of Rome for you if they were just lighting it up"; Burns: "You've got the brain of a pancake. This isn't just a story you're covering -- it's a revolution. This is the greatest yarn in journalism since Livingstone discovered Stanley.") are as intoxicatingly fun as they were eight decades ago. Watching Hildy re-discover her driven, fully engaged career choice -- highlighted, perhaps, by her spirited rundown and tackle of the city sheriff for a statement, across churning streets and in high heels -- as she simultaneously writes the story frantically on a typewriter in the City Hall press room, and, essentially, breaks up with her husband-to-be as Burns frantically screams out orders back to his copy chief over a nearby telephone, is a precise, thrilling symphony of comic timing.

5. Get Out (2017): One of the best horror films of the 2010s, Jordan Peele's incendiary film manages to be terrifying and funny, all while making a definitive statement about race in this country. As impressive an accomplishment of a debut feature as it was, one of the more satisfying aspects is the way Peele's script plants tiny seeds in the early going that come to bloom in the later acts (just one example: a character's anxiety response to stress, scratching his fingers on the armrests of his chair, becomes a clever detail in the way he manages to escape a horrible fate). Watching it a second time, I was struck at how little waste there was, how every scene managed to convey important information (a character referring to the locked basement as being closed off from the house due to "black mold") much of which you almost don't notice because Peele's writing is so disarming. The story involves a young, black photographer (Daniel Kaluuya), who travels with his white girlfriend (Allison Williams) upstate to visit her parents (Bradley Whitford and Catherine Keener) in their remote, posh country home, even as his best friend (Lil Rel Howery) warns him against it. The film's central mystery is slowly revealed over the first couple of acts, which leads to an absolute bonkers final third that miraculously manages to turn its audience -- no matter their race or ethnicity -- against the true, abject horror of rich white people. Somewhat famously, Peele originally ended his film on a downer but thought better of it after test audiences objected. Having seen both endings, I would agree with the crowd in this case. As the director himself suggested, he couldn't do that to everybody after all he put them through. 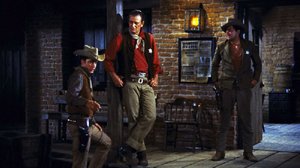 Ricky Nelson (from left), John Wayne and Dean Martin star in Howard Hawks’ 1959 classic western Rio Bravo. Hawks and Wayne intended the film as a none-too-subtle-dig at the politics of Fred Zinnemann’s High Noon, which they took for a liberal critique of McCarthyism.