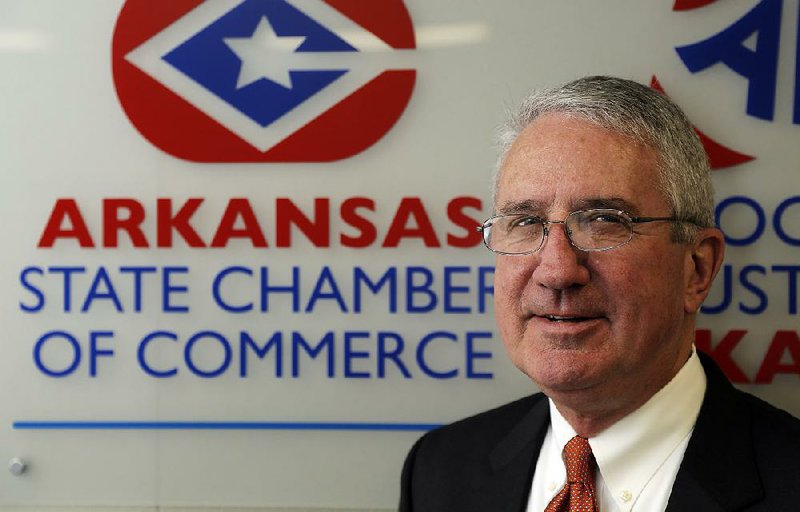 Randy Zook, president and chief executive officer of the Arkansas State Chamber of Commerce and Associated Industries of Arkansas, is shown in this file photo.

The state's trust fund for unemployment payments to Arkansans has about $840 million, its healthiest balance in years.

The fund went into the red during the recession of 2008-09, forcing the state to borrow hundreds of millions of dollars from the federal government.

"I think it's very well stocked, and certainly more than adequate for any normal business recession," said Randy Zook, president and chief executive officer of the Arkansas State Chamber of Commerce and Associated Industries of Arkansas.

The severity and duration of the coronavirus outbreak, however, loom large. "I think we could find the fund really being challenged a year from now," Zook said.

Joblessness claims surged this week in states across the U.S. after government officials ordered millions of workers, students and shoppers to stay at home as a precaution against the spreading virus. Some states may not have enough money stockpiled since the last recession to pay idled workers until the crisis ends.

The Arkansas Unemployment Insurance Trust Fund pays benefits to unemployed workers. It is financed by employers based on their payroll taxes. Workers pay none of the tax.

Payments to the unemployed in Arkansas are capped at 16 weeks. Benefits have been extended in states with persistently high unemployment levels. Previous limits were 20 and 26 weeks. The reductions over the years were by the Arkansas General Assembly.

"Sixteen weeks is an extremely short period of time under most adverse economic circumstances; it's especially short for what we're seeing and going through right now and for what we can expect," Showers said.

The trust fund ran dry in March 2009, forcing the state to take out loans from the federal government. Arkansas borrowed $360 million.

Thirty-six states took out such loans, according to The Century Foundation, a think tank in New York City that says it aligns with "progressive" and "liberal" interests. The group said net trust fund reserves nationwide flipped from a positive $38 billion in 2007 to a negative $35 billion just three years later.

Repaying the loans forced many states, including Arkansas, to cut benefits, according to the group. Arkansas was one of three states at one point to cut both the duration and amount of benefits, The Century Foundation said.

The Arkansas fund was back in the black by June 2013, with a balance of about $205 million, although the state at the time still owed the federal government $193 million. The fund has remained in the black since then.

"As the number of jobs goes up, the amount of money coming into the fund increases," Zook said, noting consistent job growth in Arkansas the last several years, coupled with fewer job losses, helped build up the fund.

Statistics from the Department of Workforce Services show the state's payout of unemployment benefits nearly doubled between 2008 and 2009 -- from $353.3 million to $649.8 million.

The amount collected from taxes increased by only $52.2 million during that time, according to department figures.

The unemployment rate in Arkansas is 3.5%, according to the latest figures.

Workers who lose their jobs in the coming weeks or months won't be made whole by unemployment checks, "but they will get a substantial part of that pay," Zook said.

He commended the restaurants that already have reduced capacity or moved to delivery-only and instituted curbside service to limit the spread of the virus but said further restrictions of takeout and delivery-only were necessary.

Job losses in the hospitality industry already have occurred and will continue, Hutchinson said.

The number of job losses in the state over the past week and the number of claims filed for unemployment benefits aren't yet available.

He ordered the state Department of Commerce to waive the normal one-week waiting period between a claim being filed and the first check. He also waived work-search requirements for 30 days, allowing the unemployed to receive benefits without seeking other employment. The exception applies only to those employed by businesses that are temporarily closed with plans to reopen.

Hutchinson also said applications for benefits can be filed online or by telephone rather than in person.