Before and After: Strange, albeit historic, times 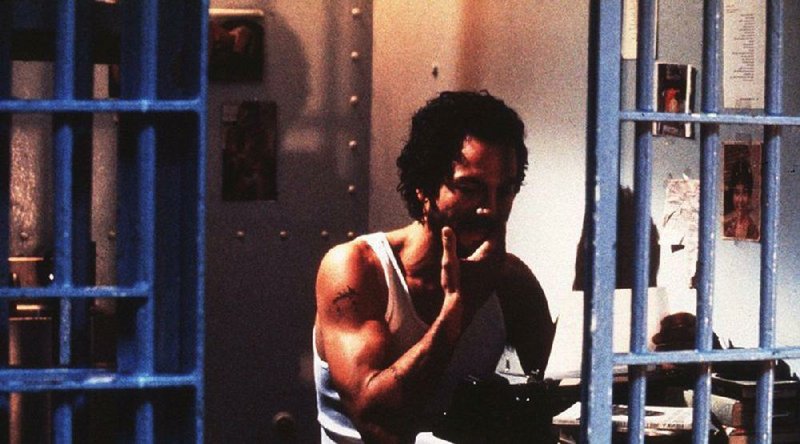 Benjamin Bratt played the titular Puerto Rican poet and playwright who rose to prominence as a co-founder of the Nuyorican Poets Cafe in the mid-1970s in Leon Ichaso’s 2001 film Piñero. The Sept. 11, 2001, screening of the film at the Toronto Film Festival, which began after the terrorist attacks in the United States, was halted after about 15 minutes.

You might think the least of my worries is that I'm sitting here on Tuesday afternoon and can't tell you what's going to be in the movie theaters on the day this column comes out. We don't even know if there will be any movie theaters open this weekend, though our best guess on Tuesday afternoon is that two movies that we're reviewing -- Portrait of a Lady on Fire and Wendy -- will open in Arkansas. Because that's what we've been told.

Whether or not you want to go to the movies is up to you. We went Sunday afternoon, which feels like a long time ago now, and saw Emma. in a theater. There were two other people in the auditorium, and we observed proper social distancing etiquette. We had a good time, maybe the last good time we'll have in the vicinity of strangers for a while.

We're isolating ourselves, but we're not quarantining ourselves. We still take the dogs on walks, we still see some of our friends and chat with them from a comfortable distance. We plan on getting take-out food and watching a lot of Netflix and Amazon Prime Video.

I've got a plan for how we're going to handle movie coverage over the next few weeks: we're going to take a deep dive into film culture and history and write about things you might want to stream while cooped up. We'll make it lively and try to offer a respite from the other news of the day.

There are moments in your life that divide it into a before and after; if you live through interesting times you might experience a couple of these. The assassination of John F. Kennedy in 1963 felt like that -- I had just turned 5 years old, but I remember it, and more than the tragedy itself the heavy weather of the aftermath, the gray pall that came over the country that didn't seem to lift until America found out about The Beatles.

We spent the last minutes of one Before moment in Toronto's Pearson International Airport. We were coming home from the Toronto International Film Festival, spending the last of our Canadian money before boarding our flight to Cincinnati. We picked out a couple of sandwiches and moved down the line when we noticed a clot of people, their heads turned up toward a television monitor. They were all just standing there, and I had a cruel thought about the zombifying power of TV before we looked up and saw for ourselves.

But it wasn't a movie. Bad stuff was happening. A big man in a tight T-shirt rolled past me, muttering an expletive. I had a thought: there was no way our plane would leave on time. We hurried to our gate anyway only to be told our flight was canceled and we should go back to the ticket counter to rebook.

It was odd, reversing through customs, back through the metal detectors -- our passports had been scanned, didn't that need to be undone? But no one stopped us.

I started to tell him what was beginning to coalesce in the back of my mind, that apparently it was a terrorist attack where airplanes had been weaponized. It sounded crazy. He looked at me warily, smiled with noncommittal Canuck pleasantness and clicked some keys. He stopped: "I've never seen this before. U.S. airspace has been closed."

Another airline employee approached and spoke in his ear. She didn't mean for me to hear but I did. She had more detail. She had flight numbers. She said they were big planes, commercial airliners.

For a moment we were stunned.

Then Karen ran to a bank of payphones to call our hotel to get our room back. The Delta agent clicked through the weeds and somehow provisionally booked us on a next-day flight. I went to the Thomas Cook counter and traded a $100 bill for some fresh Canadian cash.

A woman stood in the middle of the ticketing hall crying softly into her cellphone.

We got in a limo and rode back to Toronto, as our driver -- a tidy middle-aged Sikh in a blue blazer and crisp white shirt -- told us (incorrectly) they'd also hit the Sears Tower in Chicago, that a car bomb had gone off in front of the State Department. It was war. I felt loose and high, unstuck from the earth.

I had a careerist thought: Someone had blown a hole in the world, and I wanted to see it.

Karen and I talked about going to New York. Maybe we could rent a car; it was about an eight-hour drive away. But by the time we'd got back to the hotel and called the newsroom back in Arkansas, the border had been sealed and a security perimeter had been set for 50 miles around New York City.

No rental cars were available anyway. The Hollywood Elite in Toronto had snapped them up.

So we went back to the festival, to sit in the dark for a while. We went to a screening of Piñero, a film by Leon Ichaso about Miguel Piñero, the Puerto Rican poet and playwright who rose to prominence as a co-founder of the Nuyorican Poets Cafe in the mid-1970s. About 15 minutes into the film, set on New York's Lower East Side, the screen went dark and a festival volunteer announced that the screening, along with all other screenings planned for that day, was canceled, as were all press conferences and social events.

So we wandered over to the festival's press lounge in the Park Hyatt. For a while, we sat on the floor with about 100 other journalists from all over the world, watching what the CBC warned was raw unedited footage. They showed a thrashing figure leaping -- or falling -- from one of the towers. They showed people cheering in the West Bank. Someone cursed, someone giggled nervously, heads turned. The Toronto Star took our picture.

We left to walk the streets. Bomb threats were being phoned in to Ottawa. There was a police and fire cordon around a block of Bay Street in front of the Royal Ontario Museum. Karen asked what it was about and a fireman told her "public safety."

We ate our airport sandwiches in a park filled with students and mild sunlight. There were hand-lettered signs expressing support for the U.S. in the shop windows. A little girl on television was saying it was sad because Canada and America were the same. Stores were closed, tall buildings emptied. Everywhere were tender looks and soft words; patience spread like a balm.

We walked south down Yonge Street. The Eaton Centre shopping mall closed for fear that the attacks might spread. A banner hung above a shoe store: "Our Canadian hearts are with you."

I remember the festival -- a good one, with Jean-Pierre Jeunet's Amélie, Richard Linklater's Waking Life and David Lynch's Mulholland Drive, where I talked to Arliss Howard and Debra Winger about our mutual friend, Mississippi writer Larry Brown, whose short stories had formed the basis of their movie Big Bad Love.

I remember watching Joaquin Phoenix in Buffalo Soldiers, an enjoyably caustic story about military ineptness and malfeasance that you probably never had a chance to see.

It took two years for Buffalo Soldiers to make it into theaters. Miramax, which acquired distribution rights to the film on Sept. 10, 2001, didn't think the public would be receptive of a movie that portrayed American troops as cynical schemers and thieves. It wasn't the only festival movie affected by the attacks. A Tim Allen comedy written by Dave Barry called Big Trouble -- about a plot to smuggle a nuclear device onto a plane -- was delayed seven months.

Similarly, New York-set Serendipity -- a rather horrible romantic comedy -- was delayed a similar length of time so that shots of the twin towers could be edited out. Even Ed Burns' modestly charming Sidewalks of New York was pushed back to allow a little judicious trimming.

We took a bus to Cleveland, rented a car and drove straight through to Little Rock under empty skies. And we got on with our After.

I don't know that we can point to a clean dividing point in our current circumstances, but I don't believe we're in the After yet. Emma., for me, was in the Before. Now, we're in the midst of it. It's scary. And annoying.

But the After is coming.

Print Headline: Before and After: Strange, albeit historic, times