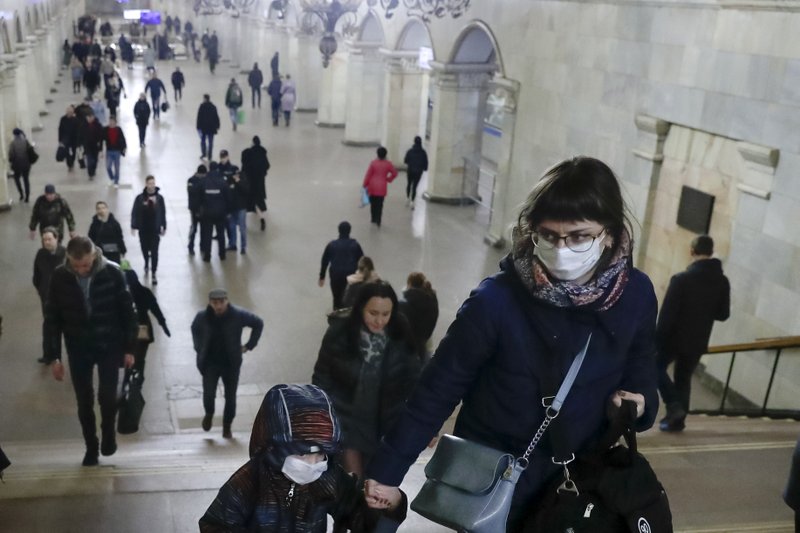 A woman with her child wear medical masks walk inside the Komsomolskaya Metro (subway) station in Moscow, Russia, Wednesday, March 18, 2020. Authorities in Russia are taking vast measures to prevent the spread of the disease in the country. The measures include closing the border for all foreigners, shutting down schools for three weeks, sweeping testing and urging people to stay home. For most people, the new coronavirus causes only mild or moderate symptoms. For some it can cause more severe illness. (AP Photo/Pavel Golovkin)

BRUSSELS -- Russian state media and news outlets supporting President Vladimir Putin are waging a fake news campaign aimed at undermining public confidence in the ability of European health care systems to cope with the coronavirus, according to a European Union analysis.

The report, seen by The Associated Press, said that EU experts noted nearly 80 instances of virus-related disinformation in about the past two months, including claims that the covid-19 virus was a Western-made biological weapon.

"The campaign is designed to exacerbate confusion, panic, and fear, and to prevent people from accessing reliable information about the virus and public safety provisions," states the report, which was compiled by the EU communications division assigned to countering false information.

The EU experts pointed the finger at news outlets Russia Today, Sputnik, Oriental Review, Geopolitica and others. As examples of false reports, they cited stories saying covid-19 was less harmful than the flu, developed by the United States, brought into Europe by migrants or exacerbated by taking ibuprofen to relieve symptoms.

Disinformation experts say Russia has steadily chipped away at the European Union's image since 2014 by supporting far-right and anti-European political parties, and also by attacking the integrity of mainstream media. The fast-spreading virus could offer a new avenue to do that.

Four times as many internet searches about the virus were taking place in March than at the end of January, and twice as many are being done now compared to the end of February, the EU report said. Social media and digital monitors estimate the coronavirus was mentioned 115 million times online between Jan. 1 and March 12.

The report, by the EU's Strategic Communications division, said that RT Spanish is the 12th most popular source of coronavirus-related content across many languages, including English, Spanish, Russia, Italian and Arabic, beating out even major international news outlets.

Messages in Spanish were aimed at people in Europe and Latin America to "advance apocalyptic stories, blame capitalists for trying to benefit from the virus, and emphasize how well Russia and Putin are dealing with the outbreak," the report states.

Russia has confirmed a total of 199 virus cases. However, many health experts predict the number to be much higher, with infections going undetected since testing for the new virus is not widespread.

Russian Foreign Ministry spokeswoman Maria Zakharova on Thursday rejected the EU's claims about disinformation coming from Russia, branding them "fake news" and suggesting they were part of a smear-campaign against the country.

Zakharova said the EU tends to blame Russia for all its woes and demanded proof of the allegations made in the report, saying "if there is no evidence, it's impossible to accuse and to conduct such an aggressive information campaign, which is verging on an attack."

"We ask colleagues from Brussels to stop using memes about the alleged Russian threat and to focus in this difficult situation on helping Italy, Spain and other EU countries that are suffering from the coronavirus," she said.

European Commission spokesman Peter Stano had said Wednesday that the origin of much of the coronavirus disinformation being spread "is either in Russia or it can be tracked down to an outlet which is obviously, and has been exposed in the past, as pro-Kremlin."

Stano said false news is coming from places besides Russia but he did not name any.

"But whoever is spreading the disinformation is essentially playing with people's lives," he said.

Information for this article was contributed by Daria Litvinova of The Associated Press.