French connection: 'Portrait of a Lady on Fire' a film that espouses greatness of France’s cinema 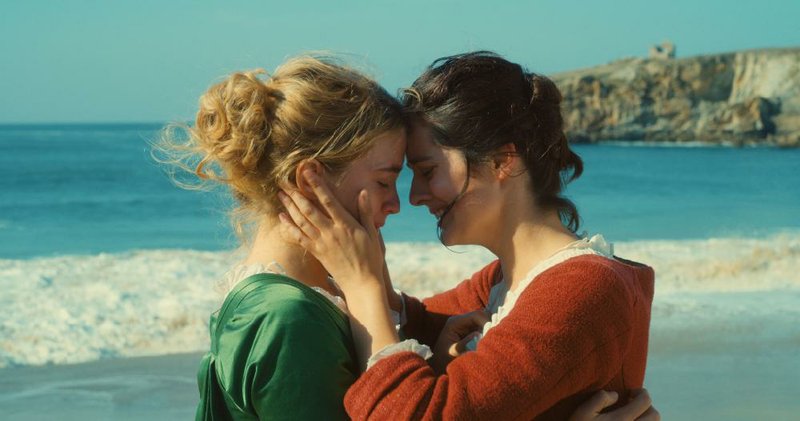 In Céline Sciamma’s Portrait of a Lady on Fire, Marianne (Noémie Merlant, right) is commissioned to paint the wedding portrait of Héloïse (Adèle Haenel), a young woman who has just left the convent and is scheduled to be married to a man she has never met.

A friend was talking about a TV series he was hate-watching. I countered by telling him all about the Netflix series The Bonfire of Destiny (Le Bazar de la Charité), a silly eight-episode melodrama based loosely on a real event, a fire at a Paris charity event that killed more than 100 people, most of them aristocratic women.

It's a shamelessly soapy show, useful primarily for reminding us that the French are as capable as turning out dumb television as anyone else. (See also the Gerard Depardieu-fronted Netflix series Marseille and the French crime drama The Red Shadows -- Les Ombres Rouges -- streaming on Sundance Now.)

Portrait of a Lady on Fire

Rating: R, for some nudity and sexuality

While I don't have to defend my consumption of mediocre French entertainment products, they do disabuse me of the idea that French culture is intrinsically superior than homegrown Hollywood. Before the streaming services, with their bottomless menus and insatiable demand for content, we generally received only the best French cinematic exports.

I hurriedly watched Céline Sciamma's meditative film in November, amid the annual end-of-the-year "For Your Consideration" binge. I was impressed enough to list it among the best films of last year, and a second, more leisurely viewing in which I paid more attention to visual details and sonic cues -- from the opening scratching of a charcoal stylus on canvas the film is an acoustic marvel, a movie which, as is said of Citizen Kane, you could watch with your eyes closed -- my rushed judgment is not only confirmed, but I'm even more convinced of its timelessness.

Stop thinking about how Sciamma marries the conventions of Gothic romance -- a drafty mansion on a wind-swept coast -- to feminist theory and simply let the film's light and noise do their work. This is a painterly film, and while its story (which won Best Screenplay at Cannes) may be the least of its virtues, it's still a virtue -- a grownup, clear-eyed tale of love thwarted by the expectations of late 18th-century society.

It begins in the studio of painter Marianne (Noémie Merlant) who is simultaneously posing for and instructing a class of female art students, one of whom has pulled from storage an old painting of Marianne's -- Portrait de la jeune fille en feu ("portrait of a girl on fire"). We are immediately cast back years, to the coast of Brittany where Marianne is being ferried from the shore to a nearby island. When a crate carrying her canvases tips overboard, she immediately jumps into the ocean to retrieve them.

And so, when she arrives after dark at the home of the subject she has been commissioned to immortalize, she's sopping. Sophie (Luana Barjrami) leads her into the grand house and to her accommodations. Soon she's warming herself before a hearth, the two canvases she has brought along drying out as well. She then makes a late-night trip to the kitchen, where Sophie tells her she hasn't known her young mistress Héloïse (Adèle Haenel) long -- she has only just arrived from the convent. Héloïse is to be married soon to a noble Milanese fop originally betrothed to her sister.

But sister went over the cliffs, and Héloïse -- still wearing her convent clothes, having no dresses of her own yet -- was called in to take her place. The portrait Marianne is to paint will serve as proof-of-concept to the suitor who has never met her. If he approves, the wedding will go forth -- presumably whether Héloïse approves or not.

Yet she has so far resisted sitting for a portrait. A previous painter never got to see her face. The next morning, Héloïse's mother explains that the plan is to paint her surreptitiously -- that she has told Héloïse (whom she has locked away for the time being) that Marianne has been hired as her companion, as someone to converse with on her daily long walks around the property. (Also, she should watch that she doesn't follow her sister over the cliffs.) Marianne will have to study her face and paint her in secret. Is that feasible?

Whether or not it is, Marianne agrees and is released into Héloïse's orbit. And soon pulled close by her gravity.

Knowing more about what happens wouldn't spoil the film, but might seem to reduce it to something more common. It is a story about desire, about the shifting dynamics between artist and subject, watcher and watched, and about teasing intimacy from a traumatized psyche.

More than that, it's a symphony of artful images (caught by cinematographer Claire Mathon). I'll let more confident (or less male) critics comment on whether Sciamma is pursuing some "female gaze" distinct from what my lying eyes tell me and just say it's a beautiful, deeply sensual film.

While this very prettiness might be turned into an argument against its seriousness, here every detail seems to be chosen and arrayed to signal character, to specify particular attributes of the two main characters. Héloïse may be trapped in her gilded trajectory, as Marianne is in hers, but despite the director's austere and sometimes stylized presentation of their bodies and dialogues, neither of them function as anything as clinical as a symbol.

They breathe, they shiver, they convince us of their interiority -- their desires and their disappointments.

You could call it melodrama, yet it's anything but silly. 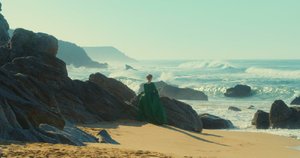 Héloïse (Adèle Haenel) is set to be married off to a Milanese nobleman, but only after he sees her portrait. Since she refuses to sit for a portrait, a young painter is engaged to befriend her and surreptitiously observe her in Portrait of a Lady on Fire, a love story that pointedly refuses to privilege what feminists call “the male gaze.”