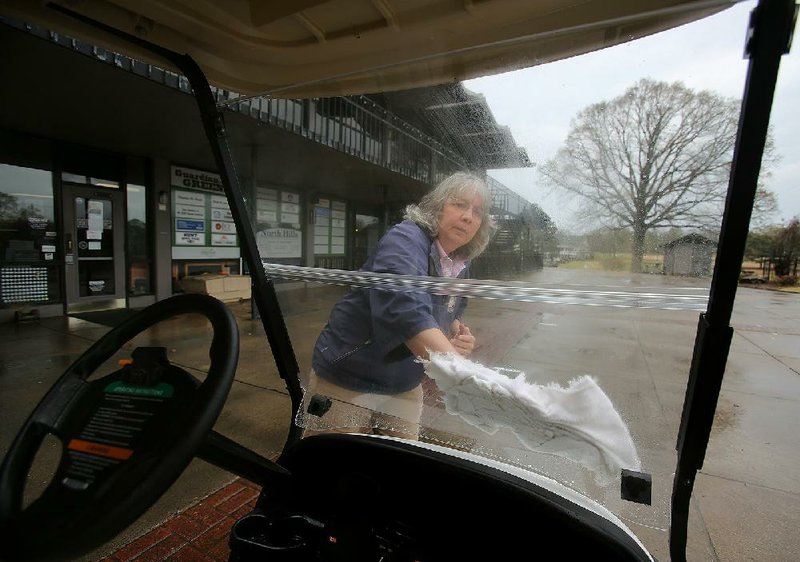 Dawn Darter, the golf professional at The Greens at North Hills in Sherwood, wipes down a golf cart at the course Thursday. While Little Rock city courses are shut down, some others are taking extra precautions amid concerns of the coronavirus outbreak. (Arkansas Democrat-Gazette/Thomas Metthe)

While the city of Little Rock has closed its golf courses, Rebsamen Golf Course and The First Tee, for the time being, other public and private courses in the area continue to stay open and have moved forward with precautionary measures to combat the spread of the coronavirus.

At a time when social distancing has become strongly advised by government and public health officials, there's a prevailing belief that golf can still be played on a recreational level due to its already-distant nature, so long as appropriate steps are taken.

Dawn Darter, the head professional at The Greens at North Hills, said the course, which is open to the public and operated by the city of Sherwood, has been taking extra measures for about two weeks.

Those can be felt almost as soon as a golfer arrives at the course to play.

Darter said tee times have been moved to 20-minute intervals instead of the normal 10 minutes, designed to lessen the amount of golfers who arrive at the clubhouse at the same time, reduce the foot traffic inside the pro shop and clubhouse altogether and provide more separation for groups out on the course. Golfers who arrive as singles also don't have to be paired up, a reversal of a practice that courses commonly use to help pace of play.

"What we're doing is we're trying to keep people in a comfortable situation, as far as they want to be, but you're not stacked on top of each other," Darter said.

Golf carts are also being staged 10 feet apart, whereas normally they are set closer to each other. Darter said course staff is using a high-strength disinfectant each day to clean the facility as well as the carts. Organized outings at the course in the foreseeable future, Darter said, have been postponed.

[Video not showing up above? Click here to watch » https://www.youtube.com/watch?v=KGv4MEaFf-U]

"[Golfers] know that what we do is for the safety of the players and for themselves and for the crew," Darter said. "I haven't heard anything negative, and I've had a lot of people thank us for what we're doing and staying open where they can get out to the open space. I think we're doing as much as we can possible to essentially weather the storm."

The city of Sherwood announced Thursday that it's closing all city buildings to the public indefinitely, but The Greens will remain open, and golfers are encouraged to knock on the clubhouse door to gain entry, Darren Austin, the city's interim parks director, told the Arkansas Democrat-Gazette.

Some local country clubs, which are private and typically abide by their own rules, have instituted similar measures as The Greens.

Cary Maddox, the head golf pro at Maumelle Country Club, which has a membership of 400, said the club is also taking steps to disinfect golf carts, wiping down everything from the steering wheel and seats to the sand bottles and coolers to the cart keys themselves, something the club began doing last week.

"Things like that are done on a regular basis where we would clean them, but I wouldn't say we disinfect them on a daily basis or after every use," Maddox said. "But now we're kind of mindful of that."

Members also are being advised to not touch the flagsticks on the course, bunker rakes are being removed and golf ball washers at the tee boxes are being covered up, according to Maddox. As far as staging carts, Maddox noted that because it's a country club, a majority of members that play there drive their own carts to the course.

Maumelle's junior and ladies clinics are still going on, but Maddox said they're encouraging participants to spread out and limit close contact.

The club's restaurant, though, has implemented limitations. A well-maintained restaurant is typically an essential component of a country club, as members rely on it often throughout the week for meals.

At Maumelle, Maddox said the club is no longer doing buffets and could likely soon be going to a carry-out only policy.

Less than 10 miles south of Maumelle Country Club, west Little Rock's Pleasant Valley Country Club -- which has a membership of 975 -- has also done away with buffets and is encouraging members to do curbside carry-out if they want to eat at the restaurant, according to Michael Auerbach, Pleasant Valley's general manager.

Disinfecting carts, encouraging golfers to either walk or take their own cart, and limiting group tennis and fitness classes to no more than 10 people, are among other measures Pleasant Valley has instituted, Auerbach said.

"Everything is so fluid. We're modifying and changing daily or multiple times a day," Auerbach said. "Our business is way down -- way, way down. Our carry-out business is way up. People are taking advantage of that.

"But people are very apprehensive about going out, and we want to be here for our members, but we also want to be safe to our employees and our members and do what's right."