March of virus relentless in West 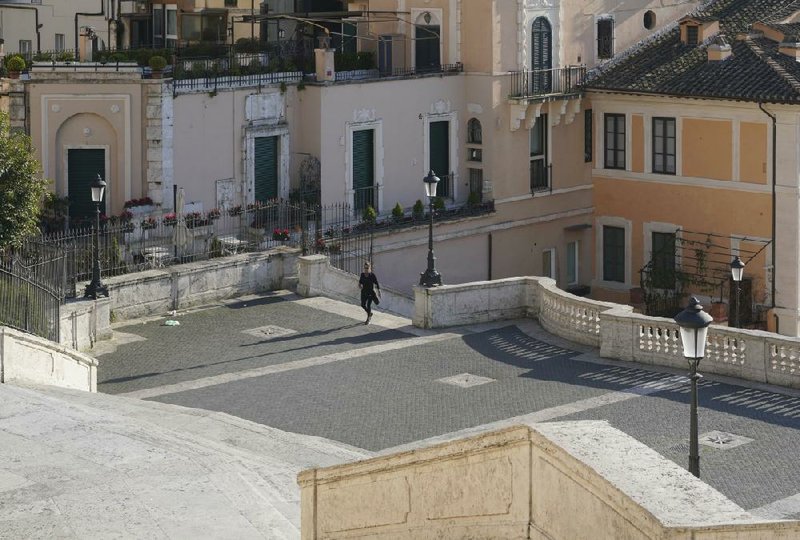 A solitary person walks the Spanish Steps in Rome on Thursday. Italian officials are warning that they might impose tougher restrictions on outdoor outings as the death toll from the coronavirus spikes. (AP/Andrew Medichini)

ROME -- Italy's death toll from the coronavirus outbreak eclipsed China's on Thursday as the scourge extended its march across the West, where the United States and other countries increasingly enlisted the military and improvised at every turn to get ready for an onslaught of patients.

In the U.S., the Army prepared mobile military hospitals for deployment in major cities. In Madrid, a four-star hotel was turned into a hospital. Medical centers around the United States set up drive-thru testing sites that drew long lines of motorists waiting for nurses to swab their nostrils.

As the outbreak spread westward, it infected at least one European head of state: Monaco's 62-year-old Prince Albert II, who continued to work from his office. And it appeared to be opening an alarming new front in Africa, where health care in many countries is already in sorry shape.

At the United Nations in New York, Secretary-General Antonio Guterres said the world is "at war with a virus" and warned that "a global recession, perhaps of record dimensions, is a near certainty."

"If we let the virus spread like wildfire -- especially in the most vulnerable regions of the world -- it would kill millions of people," he said.

Italy, with 60 million citizens, recorded at least 3,405 deaths, or roughly 150 more than in China, a country with a population over 20 times larger. At the same time Italy reached its bleak milestone, Wuhan, the Chinese city where the coronavirus first emerged three months ago, recorded no new infections, a sign that the communist country's draconian lockdowns had worked.

Health authorities cited a variety of reasons for Italy's high toll, key among them its large population of older people, who are particularly susceptible to serious complications from the virus. Italy has the world's second-oldest population, and the vast majority of its dead -- 87% -- were over 70.

In a measure of how the fortunes of East and West have shifted, New York officials were sent to China to buy more ventilators. And in Italy, the leader of a delegation from the Chinese Red Cross openly castigated Italians for failing to take the country's national lockdown seriously.

[Video not showing up above? Click here to watch » https://www.youtube.com/watch?v=mXrYPFCi6mw]

On a visit to the hard-hit city of Milan, Sun Shuopeng said he was shocked to see so many people walking around, using public transportation and eating out in hotels.

Worldwide the death toll crept toward 10,000 and the number of infections topped 240,000, including nearly 85,000 people who have recovered.

In China, Thursday marked the first time since Jan. 20 that the locked-down city of Wuhan, where thousands once lay sick or dying in hurriedly constructed hospitals, reported no new locally transmitted cases. Authorities said all 34 new cases recorded over the previous day had come from abroad.

China has hailed its success as evidence of what can be achieved when a vast, top-down bureaucracy that brooks no dissent is mobilized in pursuit of a single target.

"Today, we have seen the dawn after so many days of hard effort," said Jiao Yahui, a senior inspector at the National Health Commission.

A lot of the country's populace has been embittered by how the ruling Communist Party has handled the scourge. Questions have been raised about the accuracy of China's statistics. And even if zero local infections has been achieved, that does not mean zero new cases in the future.

Within China, many provinces and cities have essentially shut themselves off to travelers, raising the question of whether the virus will reemerge once such barriers are lifted and people begin crisscrossing the country again.

"It's very clear that the actions taken in China have almost brought to an end their first wave of infections," said Ben Cowling, the head of the division of epidemiology and biostatistics at Hong Kong University's School of Public Health. "The question is what will happen if there's a second wave because the kind of measures that China has implemented are not necessarily sustainable in the long term."

If Thursday's numbers are more than a statistical blip, it would represent a remarkable turnaround for the Chinese government, which drew widespread public anger when officials initially concealed and mismanaged the outbreak, even punishing the doctors who sought to raise the alarm.

China's top disciplinary body has criticized how police handled the case of Chinese Dr. Li Wenliang, who was reprimanded for rumor-mongering after he warned others about the coronavirus in the early days of the outbreak.

Li later died from the virus, sparking a national outpouring of grief and criticism of authorities on social media.

Chinese media reports late Thursday said an investigation by the State Supervision Commission, China's top disciplinary body, found that the reprimand was inappropriate. It urged the police to revoke the reprimand and hold those involved accountable.

The British government, criticized as slow to react to the virus, shifted gears and drew up legislation giving itself new powers to detain people and restrict gatherings.

The British supermarket chain Sainsbury's reserved the first hour of shopping for vulnerable customers. Among them was Jim Gibson, 72, of London, who was concerned that the country wasn't ramping up testing fast enough.

"You can't go on ignoring World Health Organization guidelines -- if they're wrong, who the hell is right?" he said. "Let's have no shilly-shallying."

French Prime Minister Edouard Philippe pleaded with people to keep their distance from one another, even as the crisis pushed them to seek comfort.

"When you love someone, you should avoid taking them in your arms," he said in Parliament.

The World Health Organization warned that the virus is spreading quickly in Africa, from about five countries a week and a half ago to 35 of the continent's 54 nations -- an "extremely rapid evolution," said WHO's Africa chief, Dr. Matshidiso Moeti.

Information for this article was contributed by Nicole Winfield and Tim Sullivan of The Associated Press; and by Javier C. Hernandez of The New York Times. 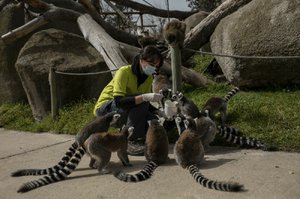 Veterinarian Eva Martinez feeds lemurs during a daily check Thursday at the zoo in Madrid, Spain, where feeding time was business as usual. Zoo workers are social distancing among themselves and, when possible, with the animals. (AP/Bernat Armangue) 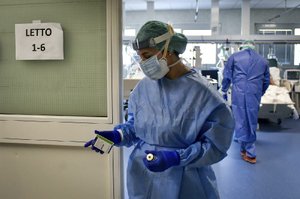 A nurse leaves the intensive care unit at a hospital Thursday in Brescia, Italy, as Italy passed China as the country with the most coronavirus deaths, with 3,405 victims. Worldwide, the death toll was rising toward 10,000 as the total number of cases topped 240,000. More photos at arkansasonline.com/320outbreak/. (AP/LaPresse/Claudio Furlan)