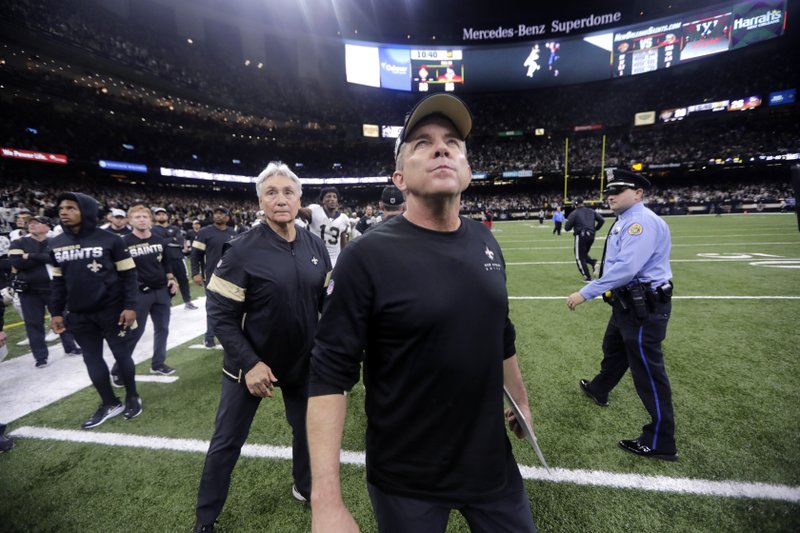 New Orleans Saints head coach Sean Payton looks up as he walks off the field after overtime of an NFL wild-card playoff football game against the Minnesota Vikings, Sunday, Jan. 5, 2020, in New Orleans. The Vikings won 26-20. (AP Photo/Brett Duke)

NEW ORLEANS -- New Orleans Saints Coach Sean Payton says he has tested positive for the coronavirus, is resting comfortably at home and is making his test result public in hopes he can motivate people to do more to fight the pandemic.

Payton learned Thursday that he has tested positive for the coronavirus, he told ESPN before posting a photo of himself smiling as he sat on a couch next to his dog.

"Appreciate the well wishes," Payton wrote on his Twitter page. "I'm feeling better and fortunate to not have any of the respiratory symptoms. 4 more days at home."

Payton, 56, is the first employee of either an NFL team or the league to make such a diagnosis public.

Payton told ESPN that he was tested Monday for coronavirus after he began to feel ill a day earlier. He added that he has not been admitted to a hospital and does not have a fever or cough.

Payton was tested soon after he returned from attending horse races Saturday at Oaklawn Racing Resort in Hot Springs, and the coach's announcement had a ripple effect in horse racing.

"He was here, and he had no symptoms," Oaklawn President Louis Cella said. "He had symptoms later. He was in an isolated area, and we're all sensitive about it. Since that time, we're isolating all our horsemen and our owners."

"Media is permitted," Cella said. "Horsemen are permitted. We've cut back owners, and we're testing everyone. Anyone who comes in and out, you get tested. When I say tested, I mean temperature control. If you have a fever, you're out."

New Orleans-based thoroughbred trainer Tom Amoss said he had spent time with Payton at Oaklawn and would immediately stop training horses that were scheduled to run at New Orleans' Fair Grounds Race Course. On Saturday, Fair Grounds remains scheduled to host the Louisiana Derby and several other graded stakes races -- minus fans. Amoss has one horse entered in Saturday's 10-race card at Oaklawn.

"I am self quarantining immediately and will get tested at the earliest possible time," Amoss wrote on social media. "I feel great and have had no symptoms. Wishing Coach a fast recovery."

Payton told ESPN he was lucky not to have any "serious side effects" of the coronavirus.

Payton said he felt it was important to be particularly vigilant in Louisiana and the New Orleans area because of international tourist traffic, especially around recently concluded Mardi Gras festivities.

"So our parents, and those that are more susceptible to this virus, deserve everyone doing their best to combat it," Payton said. "There are hundreds of people right now in tough predicaments, fighting for their lives. Let's be part of the solution, not the problem. We can easily help reduce the numbers of those impacted. We have to do our best to beat this.

"This is not just about social distancing," Payton said. "It's shutting down here for a week to two weeks. If people understand the curve, and understand the bump, we can easily work together as a country to reduce it."

Pete Perkins contributed to this article.

ENGLEWOOD, Colo. -- The Denver Broncos are waiving Joe Flacco with a failed physical designation, a person with knowledge of the move told The Associated Press on Thursday.

The person spoke on condition of anonymity because the team didn't announce the decision.

Flacco went 2-6 as Denver's starter last season before a neck injury ended his season. He was eventually replaced by rookie Drew Lock, who went 4-1 down the stretch and was named the incumbent in 2020.

This week the Broncos agreed to a two-year, $5 million contract with free agent Jeff Driskel, who will back up Lock.

The move to cut ties with Flacco comes with a $13 million cap hit for the Broncos in 2020, but it frees up $10 million to spend in free agency.

The MVP of Super Bowl 47 while with the Baltimore Ravens, Flacco has missed large chunks of the past two seasons with injures, playing in nine games in 2018 in Baltimore and eight in 2019.

Last season he threw for just six touchdowns with five interceptions and he was sacked 26 times in his eight starts.

DETROIT -- Darius Slay got what he was waiting for -- a trade out of Detroit and a big new contract.

The Lions agreed to trade Slay to the Philadelphia Eagles, ending the standout cornerback's seven-year stint in Detroit. Agent Drew Rosenhaus confirmed the trade Thursday and that Slay agreed to a three-year, $50 million extension with Philadelphia.

The Lions drafted Slay 36th overall in 2013, and he earned All-Pro honors in 2017. Slay wanted a new contract before last season and did not attend Detroit's mandatory minicamp. He ended up reporting to training camp and played well enough to earn a third Pro Bowl nod.