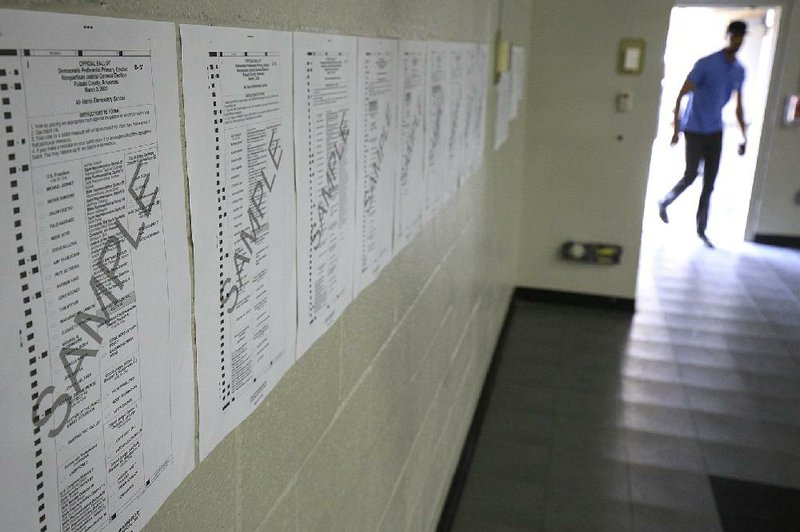 Covid-19's spread through the Natural State now casts doubts on some of what and who Arkansans will vote for in November.

The virus has stolen the primary canvassing period from independent candidates and ballot initiative groups who rely on public events and warmer weather in early spring to gather signatures of registered voters to gain access to the ballot.

Two groups circulating petitions to put various constitutional amendments on November's ballot formally suspended their efforts on Thursday as they wait to see what the public health landscape looks like in a few weeks. Other groups and candidates have drastically scaled back their efforts, focusing on signature gathering among family members and friends and mail.

In interviews this week, canvassing group leaders said they are concerned, but for the most part, remained hopeful that petitioning will be able to continue in time to gather enough signatures before the July 3 deadline to submit them to the office of Secretary of State John Thurston for validation.

Arkansas Voters First hopes to place a proposed constitutional amendment on the November ballot that would create a new commission that would be responsible for legislative and congressional redistricting every 10 years. The group won't be gathering signatures until "the world returns to normal," said spokesman George Shelton.

"Obviously, this is a completely unheard of circumstance, so we're working to adjust our strategy," he said. "We'll use the next few weeks to make sure our signature gathering operation is completely fine-tuned. Once everything is lifted, we want to hit the ground running."

The start of spring, with its many festivals and large public gatherings, is the primary season for petition drives for initiative groups. However, because of the coronavirus, nearly all public gatherings have been canceled, and public-health guidance recommends avoiding close interaction with others, particularly strangers.

Groups proposing amendment to the Arkansas Constitution have until July 3 to collect at least 89,151 signatures of registered voters to qualify for the Nov. 3 ballot, according to the secretary of state's office.

Petitions are circulating for four constitutional amendments. Two would legalize marijuana for recreational use; one would revamp how Arkansas draws its state legislative and congressional district boundaries; and the other would authorize up to 15,000 coin-operated amusement machines.

Independent candidates also must circulate petitions. By May 1, independent candidates must submit signatures of at least 3% of the number of voters who participated in the 2018 gubernatorial election in the district for which they are running, but no more than 10,000 signatures. In the 2018 gubernatorial election, 891,509 people voted; 3% would be 26,745 for a statewide office, but the maximum required is 10,000.

U.S. Senate candidate Dan Whitfield, an independent from Bella Vista, said this week that he had canceled all of his upcoming campaign events. Whitfield in an interview said that his campaign will instead focus on gathering signatures by mail.

Whitfield, who is trying to challenge U.S. Sen. Tom Cotton, R-Ark., said he had already gathered about 3,500 of the requisite 10,000 signatures. The virus, he said, has brought everything to halt.

"It's going to make it a lot harder," he said. "But we have the support we need. We'll just have to double down our efforts to get people to mail in."

Whitfield and several petitioning groups have asked the secretary of state's office to offer time extensions or lower the threshold because of the extraordinary circumstance.

But Kevin Niehaus, a spokesman for the office, said the office could offer no extensions because it must meet several statutory deadlines. The secretary of state must certify any ballot initiatives to county election commissions by Aug. 20, for instance, and counties, under federal law, must send out absentee ballots by Sept. 18.

"This is not something that the secretary of state's office is exploring because we don't have the authority to push back the signature submission date," Niehaus said in an email. "We certainly agree that the covid-19 pandemic puts those gathering signatures for ballot initiatives and independent candidates in a tough position however pushing back the submission deadline would make it impossible for the secretary of state's office to meet our statutory deadlines."

Other states have explored ways to assist initiative groups. In neighboring Oklahoma, the secretary of state's office on Wednesday paused the 90-day circulation period for initiative petitions until the governor's emergency declaration there is lifted, at which time the 90-day period will resume and a new deadline calculated.

Jason Cline, a spokesman for Arcade Arkansas, said Thursday that the group was pausing its work to offer coin-operated amusement machines in Arkansas.

"We are, for the time being, suspending signature operations," he said. "But we're watching the situation closely."

Cline said he didn't want to speculate about how the disruption would ultimately affect the group's chances of getting its proposal on the ballot in the fall.

For Arkansas Voters First, this is a make-or-break year since redistricting will occur after this year's U.S. census. The group's proposal would delegate congressional and state legislative redistricting to a nine-member commission.

Under the Arkansas Constitution, the Legislature draws new lines for congressional districts. The governor, secretary of state and attorney general work together to the draw the districts for the state House and Senate.

Arkansas Voters First has said its proposal would do away with "partisan gerrymandering."

"Since gerrymandering happens once every 10 years, we don't have the luxury of waiting until next year," Shelton said. "That makes it critically important that we use our time wisely to ensure people have the right to choose their politicians, not the other way around."

Canvassing has slowed substantially for pair of groups circulating petitions for similar but different constitutional amendments that would legalize cannabis for recreational use.

Kevin Dorning, one of the leaders of Arkansas True Grass, the group behind the Arkansas Recreational Marijuana Amendment of 2019, said the group was doing a limited amount of canvassing, mostly through businesses that have agreed to offer the petition to patrons.

The group is looking for ways to distribute its petitions to its members for a widespread canvassing effort to try to make the ballot.

"With how driven we are, we will still make it in, but we have to work harder on it and we are," Dorning said. "If we can't get what we will need due to the virus, then that is just the way it is. We will try again. Safety comes first, period."

Melissa Fults, the sponsor of the Adult Use Cannabis Amendment, said her group had stopped collecting signatures except for a few canvassers, who she said were encouraged to take every precaution to protect themselves and the public.

As long as canvassing can resume by early May, Fults said she expects to make the ballot. The problem, she said, will be if the social fallout from the virus carries into May.

Fults' husband, Gary Fults, also is circulating petitions to run as an independent candidate for House District 27, which includes portions of Saline and Pulaski counties. He needs 298 signatures to qualify.

With conventional petitioning methods out of the question, Fults said he's likely to try to gather signatures through the mail.

"It's going to take some outside-the-box thinking," he said.