U.S. unemployment up in outbreak 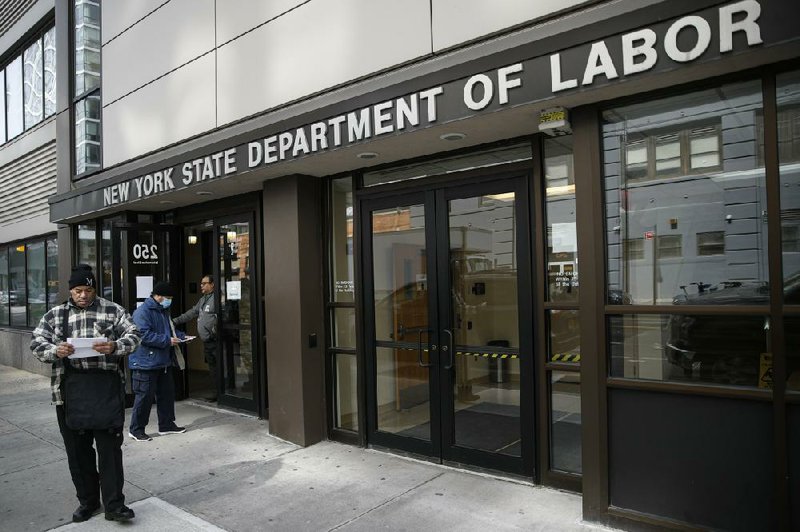 Visitors to a New York Department of Labor office are turned away at the door Wednesday because of coronavirus closures in New York City. (AP/John Minchillo)

WASHINGTON -- American workers are getting laid off at an unprecedented pace as the coronavirus outbreak shuts down much of the economy, and the government safety net to help the newly jobless appears ill-equipped to handle the surge in the unemployed.

More than a million workers are expected to lose their jobs by the end of March, economists say, a dramatic turnaround from February when the unemployment rate was near a record low. Ball State University economist Michael Hicks predicts this month could be the worst for layoffs in U.S. history.

Layoffs are rippling through many companies, large and small. Each one means less income for those out of work, forcing them to cut spending, which can push still more businesses to cut jobs.

On Thursday, a union official said that hundreds of workers were being laid off at Philadelphia International Airport. Gabe Morgan of Local 32BJ of the Service Employees International Union told The Philadelphia Inquirer that an estimated 600 to 1,000 of its members will lose their jobs through Monday.

Smaller companies have shut their doors with little time to prepare. Restaurants, bars, movie theaters, gyms, and other firms have been ordered to close by states and cities. In Portland, longtime independent bookseller Powell's closed its five stores last weekend and has since laid off more than 300 workers. Compass Coffee, a small chain in Washington, D.C., has laid off 150 workers, or about 80% of its staff.

The travel industry is at risk of being particularly devastated, with airlines grounding planes and hotels increasingly empty. The U.S. Travel Association predicts that 4.6 million jobs in the industry could be lost, which by itself would push the unemployment rate to 6.3%, from its current level of 3.5%.

The surge in applications for unemployment insurance is straining state unemployment offices, which deliver benefits to the jobless so they can buy food and pay rent.

As Americans turn to jobless benefits, some are finding they don't qualify. Or if they do, the average payment of $385 a week doesn't go far. In some states, there's a weeklong waiting period before the first payment arrives.

"Workers expect unemployment insurance to be there for them in a downturn. A bunch of workers are about to find out that it's not," said Martha Gimbel, a labor economist at Schmidt Futures who was formerly at Indeed.com. "This is a real-life nightmare. Every hole we allowed to grow in our social safety net is hitting us all at once."

Sean McGuire lost his job as a dishwasher at a popular Portland, Ore., brunch spot on Monday. The restaurant owners gave him brisket, onions and an apology. He spent the rest of the day trying to apply for unemployment, only to be turned down.

"I was on hold with the Oregon Department of Labor for over an hour. They were inundated," said McGuire, a 30-year-old Army veteran who served in Iraq a decade ago.

McGuire moved to Oregon on Jan. 1, but he hasn't worked long enough in the state to receive benefits.

Many of the newly jobless haven't been able to file for unemployment benefits yet because the Web portals in their states are down. The problems are exacerbated by low staffing levels at state unemployment offices that didn't expect such a surge any time soon. In mere weeks, the pandemic is on track to usher in a magnitude of unemployment that took months to reach during the recession.

The best place to get a job right now might be the unemployment office.

In Washington state, where the coronavirus outbreak found its first foothold in the United States, officials are trying to fill multiple positions processing jobless claims.

"Due to the temporary closure of some businesses here in Washington state we are anticipating the need for additional staffing," according to the job posting, which promises interviews next week.

It's only the start of what will be a hiring boom by these government offices, which have been running on skeleton crews after years of historically low unemployment. Illinois, Louisiana, Massachusetts and Nebraska have also posted openings. Texas said it was trying to add people, too.

Information for this article was contributed by Heather Long, Abha Bhattarai, Rachel Siegel and Will Englund of The Washington Post; by Christopher Rugaber, Carlo Piovano, David Koenig, Michelle Price and Joyce Rosenberg of The Associated Press; and by Tiffany Hsu and Tara Siegel Bernard of The New York Times.