White House seeks $3B to buy oil as prices plunge 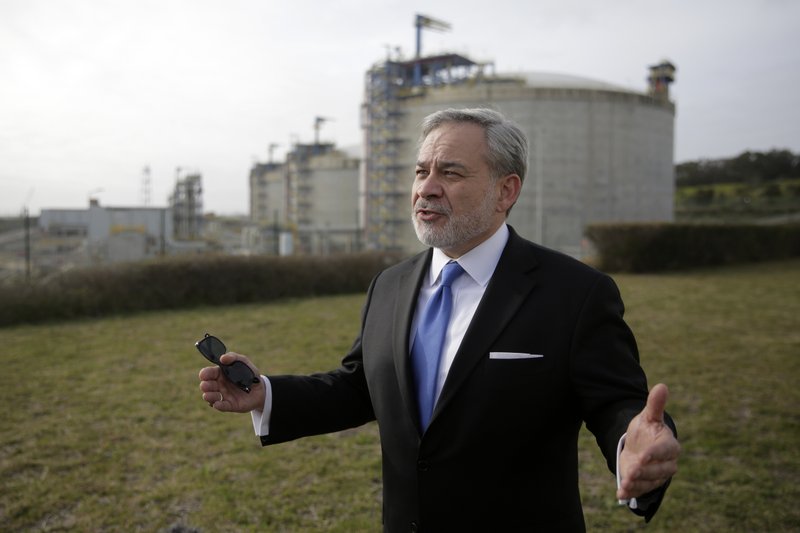 United States Secretary of Energy Dan Brouillette gestures during an interview at the LNG terminal of the deepwater port of Sines after visiting the port, in Sines, southern Portugal, Wednesday, Feb. 12, 2020. The US government and american companies are expressing interest in the expansion of the port. (AP Photo/Armando Franca)

WASHINGTON -- The Trump administration said Thursday that it is seeking $3 billion from Congress to top up the country's strategic petroleum reserves, potentially propping up U.S. oil producers after crude prices crashed globally.

President Donald Trump last week directed the Energy Department to fill the nation's emergency stash of crude oil to the top, over objections from congressional Democrats who said he was favoring climate-damaging fossil fuels and the profits of oil giants.

Plummeting crude prices benefited U.S. consumers filling up their cars, Trump said Thursday. "But on the other hand, it hurts a great industry, and a very powerful industry," he told reporters.

West Texas crude prices fell below $21 a barrel Wednesday after oil producers Russia and Saudi Arabia stepped up pumping, threatening the market share of U.S. oil, and as the coronavirus moved the world toward recession and tamped down consumer demand for energy.

Energy Secretary Dan Brouillette told reporters Thursday that the move was about filling up the country's 713.5 million-barrel Strategic Petroleum Reserve at a time of cheap oil, not about throwing U.S. oil producers a lifeline in rough markets. The reserves are stashed underground in Texas and Louisiana.

"It's a common-sense move. Everyone who's done any personal investment knows you do your best to buy low and sell high," Brouillette said.

He also denied the United States was intervening against market forces to boost U.S. oil prices. Pointing to Russia and Saudi Arabia's surge of production, he said the purpose of the nation's strategic oil reserves is "to mitigate this type of disruption."

Though the oil industry's major trade association, the American Petroleum Institute, says it does not want a government bailout, some in the industry are pushing for embargoes or tariffs.

Harold Hamm, executive chairman of Continental Resources, a major shale oil company, asked the Commerce Department to investigate what he contends is illegal dumping of below-cost crude oil onto the market by Saudi Arabia and Russia. He also asked for an embargo, hoping that would halt some of the flow of cheap oil onto the market, at least in the U.S., saying the two countries are trying to put America's shale oil drillers out of business.

"It's unfortunate that both of these countries chose -- and this was an action they thought about -- this particular time, while we have this global pandemic, to do something like this," Hamm said.

Hamm has close ties to Trump, having donated to his campaign and served on a team of economic advisers.

Trump said Thursday that Saudi Arabia and Russia were "in a fight" on oil prices and output. "And at the appropriate time, I'll get involved," he said. He did not say how.

The U.S. has been selling down some of its reserves, so filling them back up when oil is cheap makes sense, said Ryan Fitzmaurice, energy strategist at Rabobank. But it won't have much impact on the imbalance of supply and demand because Saudi Arabia is ready to ramp up production by 3 million barrels per day next month.

"It's not going to change the balance too much, and the Saudis are going to increase supply by far much more than we can buy," Fitzmaurice said.