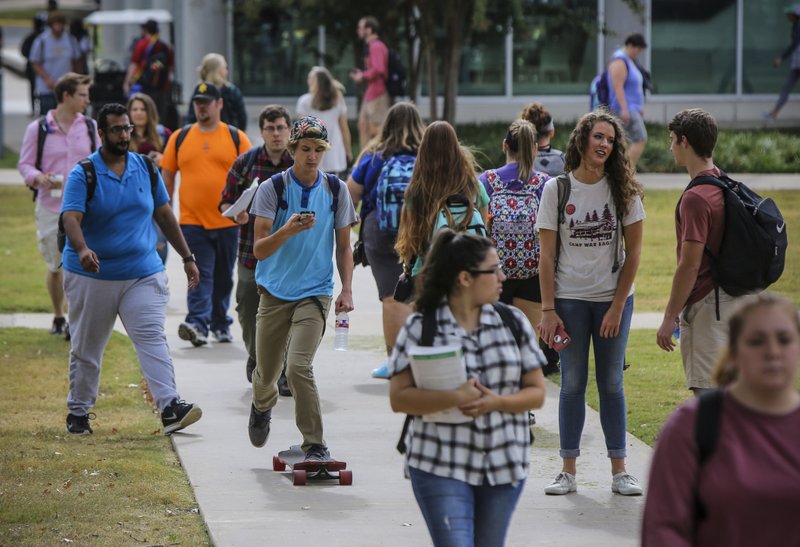 FILE - Joseph Reichman, a freshman from Dardenelle, rides his long board through heavy traffic on his way to class on the campus of Arkansas Tech University in Russellville in this 2017 file photo.

Arkansas Tech University has made an “initial” no-refunds decision for student housing as campus residences will close April 3 for all except those in need, said Robin Bowen, the university’s president, in a statement Saturday.

“There were many reasons for this initial decision. First, student housing contracts at ATU include a no refunds due to emergencies clause. There are also many unanswered questions about the possible negative effects on students and staff if the university issues housing refunds,” Bowen said.

A semester of housing costs an estimated $2,260 at the Russellville campus, according to the university’s website.

However, on Saturday evening, the university announced that its board of trustees would meet Sunday by phone to discuss “prorated” credits and refunds.

Among the state’s largest public universities, only Arkansas Tech has publicly announced an intention to not give reimbursements for housing costs associated with residence closures.

The state’s other large public schools, including the University of Central Arkansas and Arkansas State University, have not made announcements regarding closures of their campus housing.

Arkansas Tech on Friday publicly announced campus housing and dining services would remain open “for students who need them.” A statement on its website says “special circumstances” for remaining on campus include “personal safety, access to internet, no other available housing, academic distress or other legitimate reasons.”

Earlier in the week, Arkansas Tech described a plummeting population in campus housing, down to nearly 600 students from a “regular occupancy” of 2,700. Delton Gordon, Arkansas Tech’s associate dean for residence life, in a statement Monday said students who remained in campus housing cited job responsibilities and a need for internet access as Arkansas Tech, like other colleges in the state, has shifted to online-only classes because of the covid-19 outbreak.