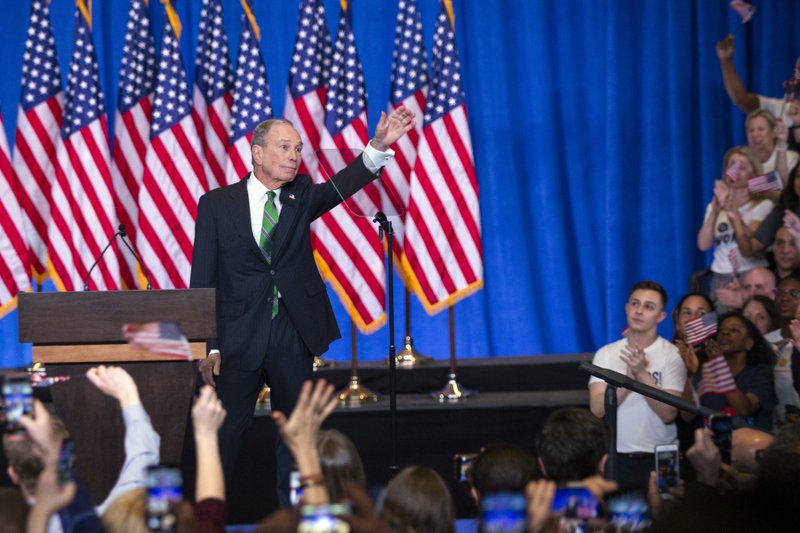 WASHINGTON -- Mike Bloomberg is transferring $18 million from his presidential campaign to the Democratic National Committee in the largest single such transfer ever.

It's the latest sign of the billionaire businessman's continued involvement in the race since ending his own campaign this month after the March 3 primaries. In those Super Tuesday contests, the former New York City mayor won only one U.S. territory.

Meanwhile, Mississippi and Indiana governors announced that primaries and runoff elections in those states are being postponed amid the coronavirus outbreak. They join a number of other states that have postponed elections.

Mississippi Gov. Tate Reeves announced Friday that he is postponing the March 31 Republican primary runoff in the state's 2nd Congressional District until June 23.

Republican Gov. Eric Holcomb said during a Friday news conference with the state GOP and Democratic Party chairmen that only during such emergency times would he support moving the primary from its scheduled May 5 date to June 2. That allows all voters to cast mail-in ballots, Indiana political leaders said.

One of the world's wealthiest men with a net worth estimated to exceed $60 billion, Bloomberg promised throughout his campaign that he would help Democrats try to defeat President Donald Trump.

The Bloomberg campaign, which hired a staff of 2,400 people across 43 states, will also transfer its offices in six pivotal states to the Democratic parties in those states to help accelerate their hiring and organizing. Those states are Arizona, Florida, Michigan, North Carolina, Pennsylvania and Wisconsin.

Former Bloomberg campaign staffers in those offices will continue to be paid by his campaign through the first week in April and have full benefits through the end of April. After that, they could offer the state parties a trained and ready pool of potential hires to build out their operations heading into the November general election.

Bloomberg had promised staffers when they were hired that they would be paid through November, but earlier this month most of his campaign team was told they had been let go and would be paid only through the end of March.

Bloomberg's money transfer comes at a crucial time for the Democrats.

Amid calls for social distancing to stop the pandemic's spread, presidential candidates Joe Biden and Bernie Sanders have had to call off large-scale public events in favor of politicking online and over the airwaves. Trump has had to do the same.

There are doubts about whether they will be able to continue raising crucial cash as unemployment soars and the economy sputters. There are also concerns that a virtual campaign could foster the spread of misinformation and may even force the cancellation of the major party conventions this summer.

Sanders' campaign did not respond to a request for comment.

As campaign offices have emptied and workers telecommute from home, training sessions for Trump's reelection effort are now being done virtually, as are all voter contacts.

Tim Murtaugh, the communications director for Trump's reelection campaign, said the campaign is "best equipped" for the pivot to virtual campaigning. But no amount of technology can replicate the arena rallies that have served as mass organizing and communication events for his reelection.

Murtaugh said the campaign hopes to roll out "live and interactive" events with surrogates online in the coming days. Still, don't expect to see Trump participating in them.

Murtaugh said that as Trump and Vice President Mike Pence hold televised briefings daily, the campaign's role is to amplify their message.

"Americans want to see that their president and their government is on the case," he said.

But it's not just the presidential candidates who will have to grapple with this new reality. Down-ballot candidates could find the shift to an all-digital campaign particularly challenging because many of them are running on much thinner budgets and have less money to spend on ads and staff to make up for the loss of in-person interaction.

"If you have no money, and you're dependent on meeting people out in organic environments, the challenges you now face are huge," said Kelly Dietrich, CEO of the National Democratic Training Committee, which trains Democrats who want to run for office or work on a campaign.

Information for this article was contributed by Emily Wagster Pettus, Tom Davies, Brian Slodysko and Zeke Miller of The Associated Press.