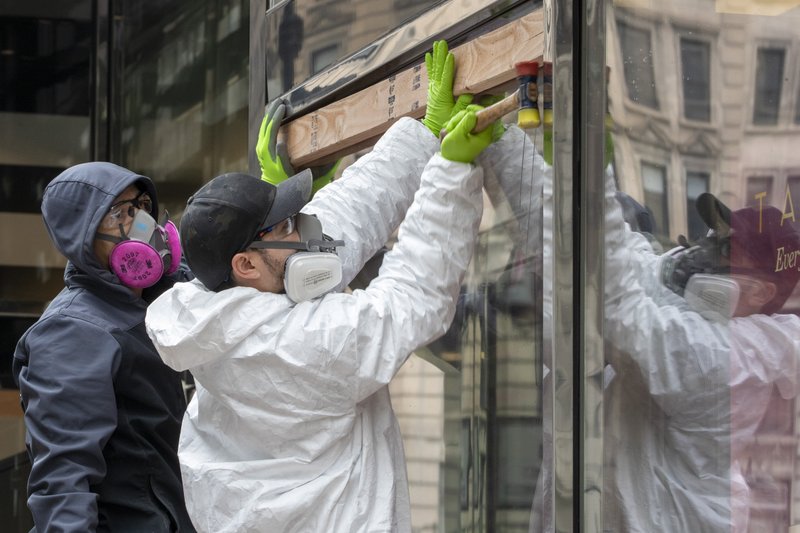 Carpenters wear protective gear as they board up the closed Sephora store on 34th St., Friday, March 20, 2020, in New York. (AP Photo/Mary Altaffer)

Illinois and New York state joined California on Friday in ordering all residents to stay in their homes unless they have vital reasons to go out, restricting the movement of more than 70 million Americans in the most sweeping measures undertaken yet in the U.S. to contain the coronavirus.

The states' governors acted in a bid to fend off the kind of onslaught that has caused the health system in southern Europe to buckle. The lockdowns encompass the three biggest cities in America -- New York, Los Angeles and Chicago -- as well as No. 8 San Diego and No. 14 San Francisco.

"No, this is not life as usual," New York Gov. Andrew Cuomo said as the death toll in the U.S. topped 200, with at least 35 in his state. "Accept it and realize it and deal with it."

Cuomo said that starting Sunday, all workers in nonessential businesses must stay home as much as possible, and gatherings of any size will be banned in the state of more than 19 million people. California likewise all but confined its 40 million residents Friday.

The governor of Connecticut, New York's neighboring state, said he was poised to issue a comparable directive.

Illinois Gov. J.B. Pritzker announced a similar order set to take effect today for the state's 12.6 million people. He said it will last through April 7.

Residents there can still go to the grocery stores, put gas in their cars, take walks outside and make pharmacy runs, the governor said at a Friday news conference. All local roads, including the interstate highways and tollways, will remain open to traffic, as well.

Grabbing takeout, ordering an Uber, taking a long walk or dropping off dry cleaning are all still permitted. The order even allows liquor stores to remain open for business.

As to how the order would be enforced, Pritzker said, "to be honest, we don't have the resources, the capacity, or the desire to police every individual's behavior."

The increasingly drastic measures in the U.S. came as patients filled the wards of hospitals in Spain and Italy, and the global death toll surpassed 11,000, with the virus gaining footholds in new corners of the world. Over a quarter-million people worldwide have been infected, according to a count kept by Johns Hopkins University, though close to 90,000 of them have recovered.

The virus outbreak's epicenter of Wuhan, China, reported no new or suspected cases for a third consecutive day.

Italy, the hardest-hit country in Europe, reported 627 more deaths, its biggest day-to-day rise since the outbreak began, and said new cases also shot up. Italy now has seen more than 4,000 deaths -- more even than China -- and 47,000 infections. The soaring numbers came despite a nationwide lockdown.

The World Health Organization highlighted the epidemic's dramatic speed, noting it took more than three months to reach the first 100,000 confirmed cases but only 12 days to reach the next 100,000. Among those infected was a member of Vice President Mike Pence's staff. The White House said that staffer did not appear to have had "close contact" with either Pence or Trump.

In Britain, the government asked 65,000 retired nurses and doctors to return to work. A convention center and hotels in Madrid were being turned into field hospitals for nearly 10,000 patients. France's military worked to build a makeshift medical center in the hard-hit town of Mulhouse. The U.S. readied military hospitals for civilian use.

"We're about to enter into a new way of living here in Los Angeles," Mayor Eric Garcetti said as California went into lockdown. "What we do and how we do it and if we get this right will determine how long this crisis lasts."

The streets of America's cities were quieter than normal, even in many communities not under lockdown.

In New York, Edjo Wheeler said he knew two people very sick with flu-like symptoms, which can indicate the coronavirus.

"That makes me walk around with my hands in my pocket to make sure I'm not touching things," said Wheeler, 49, who runs a nonprofit art center. He added: "If everyone doesn't cooperate, it's not going to be effective."

At the Paramount Drive-in near Los Angeles, Forrest and Erin McBride figured a drive-in movie was one of the few ways they could responsibly celebrate their anniversary.

"We were like, what can we do? Everything's closed," Forrest said before a showing of "Onward." "We were like, 'Well, a drive-in theater is kind of like a self-quarantined movie date.'"

The virus has struck at the very identities of many countries: closing down cafes, restaurants and boulevard life in France, ending la dolce vita in Italy, shutting down England's pubs and the ceremonial changing of the guard at Buckingham Palace, damaging sales of tulips from Holland and shuttering the Statue of Liberty in the U.S.

Governments are trying to balance locking down residents with the need to keep food, medicine and other essentials flowing.

In Britain, the category of vital workers includes doctors, nurses and paramedics -- and also vicars, truckers, garbage collectors and journalists. In New York, people venturing outside will have to stay at least 6 feet apart. And while they will be free to get some exercise to keep their sanity, there will be no "playing basketball with five other people," Cuomo said.

"These provisions will be enforced," the governor said. "These are not helpful hints."

In Bergamo, the epicenter of the Italian outbreak, cemeteries were overwhelmed.

While the illness is mild in most people, the elderly are particularly susceptible to serious symptoms. Italy has the world's second-oldest population, and the vast majority of its dead -- 87% -- were over 70.

Still, even younger people are at risk.

"You're not invincible," WHO chief Tedros Adhanom Ghebreyesus warned them. He noted that many countries are reporting that people younger than 50 make up a "significant proportion" of patients needing to be hospitalized.

Some of the only good news came from Wuhan, the Chinese city where the outbreak began and where hospitals were struggling just weeks ago. No new infections were reported there, and only 39 cases were recorded nationwide, all brought from the outside, the government said.

With its crisis waning, China has begun sending medical supplies to Europe.

The shutdown of whole swaths of the world economy took its toll, from millions of unsold flowers rotting in piles in Kenya to the slow emptying of the world's skies. Canada received 500,000 applications for unemployment benefits, versus 27,000 for the same week last year.

In the U.S., lawmakers and the White House sought to put together a $1 trillion economic rescue plan that would include the dispensing of relief checks of $1,200 for adults and $500 per child. The British government likewise unveiled a huge package under which the country for the first time in its history would help pay the wages of those in the private sector.

Iran's official toll of more than 1,400 dead was rising quickly amid fears that it is underreporting its cases.

As the virus strengthened its foothold in Africa, the continent's busiest airport, in Johannesburg, announced that foreigners will no longer be allowed to disembark.

In the U.S., the Army on Friday became the first military service to announce it is shutting down all its recruiting stations around the country in an effort to prevent the spread of the virus.

Gen. James McConville, chief of staff of the Army, told Pentagon reporters the service will move to "virtual" recruiting, wooing recruits more aggressively through a variety of social media sites and other online activities. He said the shutdown is "happening right now as we speak," and may continue through the weekend.

The Navy and Marine Corps said that are keeping their recruiting stations open, but the services will also follow state or local guidelines. The Air Force did not immediately answer questions about its recruiting but there have been no announcements that it is shut down.

Information for this article was contributed by Tim Sullivan, Nicole Winfield, Robert Burns and Lolita C. Baldor of The Associated Press; and by Dan Petrella, Gregory Pratt, Stacy St. Clair, Jamie Munks and John Byrne of The Chicago Tribune.