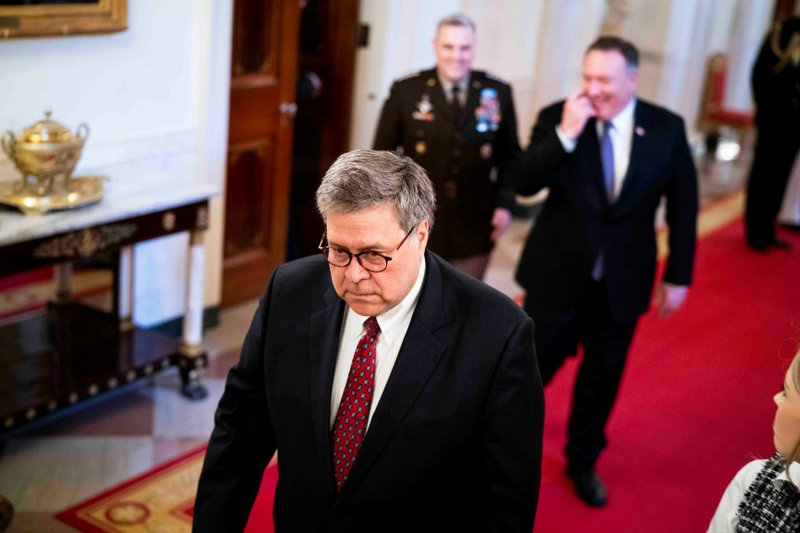 WASHINGTON -- The Justice Department last week hosted training for its lawyers on religious liberty laws as part of Attorney General William Barr's push to prioritize religious freedom cases, but the workshops prompted concern among some career lawyers that they were being educated on ways to blunt civil rights protections for gay and transgender people.

Lawyers who worked at the Justice Department during the past three administrations could not recall a similar week of training sessions on any topic.

The training week was part of an ongoing campaign at the department to bolster ​its work to​ protect religious freedom, which is regularly described by top leaders as the first right protected by the First Amendment​, a department official said in response to a request for comment. ​

In an email to employees sent on behalf of department leaders the previous weekend about the training, the department said that its leaders were proud of the work "done over the past year to promote religious freedom," including prosecutions related to land use, education and employment.

Last month, the department filed a statement of interest in federal court in Kentucky that supported the right of a photographer not to work at same-sex weddings; she said it would violate her religious beliefs. And last fall the Justice Department supported an appeals case in Maine, saying that a state law banning religious schools from the state's school tuition program was unconstitutional.

Both filings were a departure from the department's positions under the Obama administration and have drawn criticism from gay rights activists as well as supporters of a sharp separation between church and state.

The training, the first of its kind, was voluntary. It was meant to improve employees' understanding of their own free exercise ​of religious ​rights in the workplace​, as well as the department's ​resources for protecting places of worship and individual religious rights, according to the department official.

But career lawyers said that they feared the department was working to further the use of religious freedom in ways that would push back efforts to protect gay and transgender people from discrimination, according to emails and messages reviewed by The New York Times.

Some lawyers cited the department's support of the photographer in Kentucky and its support of a Colorado baker whose refusal to make a wedding cake for a gay couple was upheld by the Supreme Court. Former Attorney General Jeff Sessions said at a Justice Department event to celebrate religious freedom that the baker, Jack Phillips, was courageous and that Western culture was increasingly "less hospitable to people of faith."

"In speeches and statements, he says that civil society is being undermined by a move away from religiosity," she said. "He wants to use civil rights statutes and the [Department of Justice] to redeem what he views as the corrupted soul of America."

The department's civil rights division has also undertaken work more in keeping with past administrations. In January, Barr also met with Jewish leaders in New York to discuss a nationwide rise in anti-Semitic hate crimes. Prosecutors also secured a guilty plea from a Louisiana man charged with intentionally setting fire to three black Baptist churches in violation of the Church Arson Prevention Act.

The training sessions focused on topics including protections for religious land use, the religious rights of prisoners, the Religious Freedom Restoration Act, protecting places of worship, and the religious liberty rights of employees under federal law.

"Religious liberty is a core American value and a top priority for the department," the department said in the email about the training.

"We pledge to protect the free exercise of religion when we take our oath to 'support and defend the Constitution.' We do so out of respect for the conscience of our fellow citizens and to preserve the civil society in which our liberal democracy can flourish."

The email echoes remarks that Barr made last month at the National Religious Broadcasters' annual convention, where he said that "Augustinian Christianity" is at the root of our democracy and that Americans "providentially enjoy its blessings today."

"In my view, liberal democracy has reached its fullest expression in the Anglo-American political system," Barr said. "The wellsprings of this system are found in Augustinian Christianity."

Attendees said that no religion was prioritized over another during the training sessions, which were led by departments officials from the office of the principal deputy associate attorney general, Claire McCusker Murray; the Civil Rights Division; the Community Relations Service; and various U.S. attorneys' offices.