The race is still on; Oaklawn adjusting to latest challenges 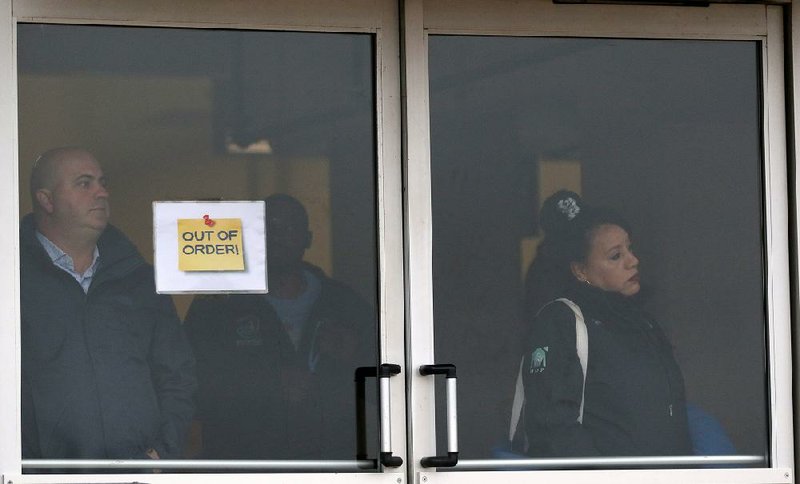 Racing fans watch as horses finish the ninth race March 14 at Oaklawn in Hot Springs. Spectators have not been allowed in the grandstands because of the coronavirus pandemic, and Oaklawn President Louis Cella said Friday that owners and their guests also will not be allowed on the racing grounds until further notice. (Arkansas Democrat-Gazette/Thomas Metthe)

HOT SPRINGS -- Racing at Oaklawn turned fan-free on March 13 and has remained that way since.

As part of the track's reaction to the coronavirus pandemic, Oaklawn Racing Casino Resort President Louis Cella announced on March 12 that races would proceed as before except that fans would not be allowed inside the facility, a self-imposed edict that will remain in place indefinitely.

The most significant result of the no-fan policy was announced Friday when Oaklawn decided to move the Grade II 1 1/8-mile Arkansas Derby and its 170 Kentucky Derby qualifying points from April 11 to May 2, the original date of the Grade I Kentucky Derby at Churchill Downs, now rescheduled for Sept. 5.

There was no more than a total of a few hundred horsemen, owners, and track personnel on hand when Nadal crossed the wire first in the Grade II $1 million Rebel Stakes over a sloppy track and through virtual silence last Saturday to earn 50 Kentucky Derby qualifying points and nearly assure himself a stall in the 20-horse Derby starting gate at Churchill Downs.

New Orleans Saints Coach Sean Payton appeared at Oaklawn last Saturday as a guest of Bill Parcells, the owner of Rebel entrant Three Technique. Parcells was not at Oaklawn, though Payton was diagnosed with coronavirus Thursday in New Orleans.

Cella said owners and their guests, like fans in general, will not be allowed on Oaklawn's racing grounds until further notice.

"Winning the Azeri with Serengeti Empress was a really big thrill for me, but I was disappointed that I couldn't share it -- because she won so easily -- with a typical Saturday crowd at Oaklawn, " Amoss said. "I wanted them to see her, too."

Trainer John Ortiz said he walked between the track apron and the grandstand during the very quiet live racing last week. He relayed his impression of this circumstance -- unique at Oaklawn since the track first opened in 1904 -- by humming the theme song to The Twilight Zone.

"Racing at Oaklawn without fans was probably the eeriest thing I've ever seen," Ortiz said.

"We have to be grateful that we can still run, but it was a very weird feeling," trainer Robertino Diodoro said.

Cella said fans were missed last weekend, but he was pleased by the show put on by horses, horseman, officials, and track staff last week.

"On the racing side, we have the benefit of very professional horsemen and our staff who can put on racing without fans without a hitch," he said.

Horsemen sounded content despite the no-fans oddity, scheduled to continue today through Sunday and beyond.

"When it's all said and done, we've got to be grateful, blessed, all the words above, that we have a family like the Cellas that own Oaklawn," Diodoro said. "What they have done in this circumstance, and a few other things over the last few days, it shows that they care about horse racing and they care about the horsemen."

"I think it's great that the owners of Oaklawn, the horsemen's group and all the management got together and figured out a way to keep everything rolling," trainer Ron Moquett said. "We had a common goal to make sure we were able to race the horses."

Beginning today, race purses will be reduced because of the loss of casino profit, minimal on-track betting, and the temporary shuttering of Oaklawn's restaurants and concessions. The Arkansas Derby purse has been reduced from $1 million to $750,000. The purse for today's Gazebo Stakes, for 3-year-old sprinters, has been reduced from $125,000 to $90,000. Purses for maiden special-weight races have been cut from $87,000 to $60,000. An allowance-optional $62,500 claiming race paid a purse of $94,000 Friday. It will pay $64,000 today.

As of Friday, a total of nine racetracks around the U.S. have canceled their seasons or postponed racing, including Keeneland in Lexington, Ky., and Aqueduct in New York. Oaklawn is one of 11 tracks still open for the winter-spring meets.

Cella said racing will continue as long as possible this season.

"One thing I know is, in this industry, as in most, you have to expect the unexpected and be able to move on," Moquett said. "Hopefully, by the end of this meet, we get the energy of the fans back in action."

"I have always loved Oaklawn, but the Cellas have shown their true colors this week with what they've done to make it work so we can continue to run," Diodoro said. "We are very lucky."