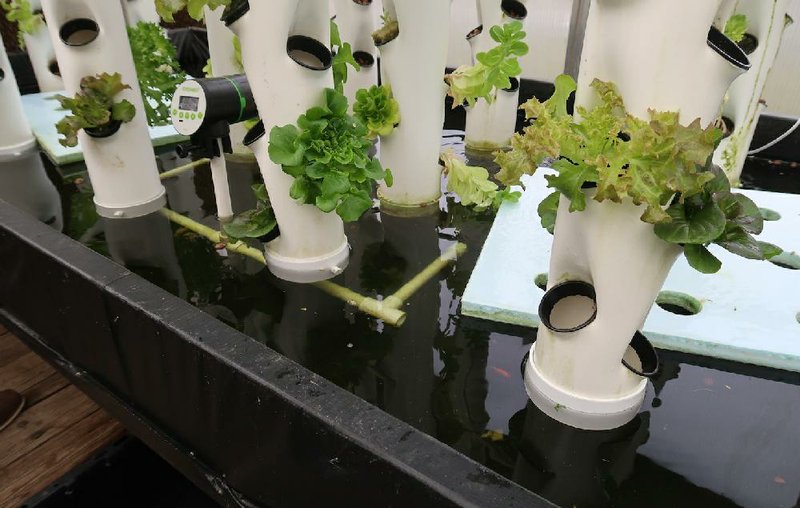 Fish patrol the water table from which vertical towers rise at Gunnar Shaffer's Agrowponics trial garden in Little Rock. (Special to the Democrat-Gazette/Janet B. Carson)

Hydroponic gardening, in a nutshell, is growing plants in a nutrient solution without soil, and aquaponics is growing plants and fish in a symbiotic relationship. While many think these are new, Space Age techniques, they have been around since the Hanging Gardens of Babylon.

But soil-free gardening has come a long way in recent years. Hydroponic systems take many sizes and shapes, and there are vertical towers with many applications.

Vertical gardening is also not a new concept. When you stake your tomato plants or grow green beans on poles, you are saving space in the garden (and giving your plants better growing conditions) by growing them upright instead of letting them sprawl on the ground. Trellising vines is another way we garden vertically.

When you marry vertical gardening with hydroponic gardening, you get vertical towers. There are a lot of vertical tower systems on the market, but one Arkansan is taking the concept to a new level.

Agrowponics is a growing startup company that Gunnar Shaffer began as a research project when he was an undergraduate at John Brown University, majoring in engineering renewable energy power systems.

An Arkansas church asked one of his engineering professors to help them build a hydroponic food system for a Guatemala mission. It had to be totally off the grid, so it had to run on solar power or another nontraditional power source. As the only engineering student with any type of agricultural background (he grew up on a farm in the Hot Spring County town of Friendship), Shaffer took on the project, and it soared.

To maximize their use of space and grow as much food as possible in a smaller footprint, he designed vertical columns to support 20 or more plants at a time. He used products easily obtained at any hardware store to get going. The goal was a garden method that was cost-efficient and easily replicable, which could have a global impact.

He built the system for Guatemala but shared how to make it on a Youtube channel so others could make their own. His videos count nearly 2 million views and have been downloaded in more than 100 countries.

While all of his information on how to build your own tower is online, he has found that many people would rather buy a system than make their own. He set up Agrowponics LLC and is manufacturing Agrowtowers and kits of all sizes, including commercial-size systems.

In 2017, he joined forces with Tom Burns, an engineer who works with Shaffer in his full-time job at Southwest Power Pool. Burns became a partner in Agrowponics and has been instrumental in the production process and automation of the control systems. They acquired a CNC machine for precision cutting and an app whereby users can log-in to monitor their growing system remotely.

The basic tower, called the Agrowtower, is made of 4-inch food-grade PVC pipes with evenly spaced slots for the plants. Agrowponics opens these growing slots up and down the tubes using a heat forming process that is customized to the size of the plants desired.

Water is pumped to the top of each tower and falls through the Agrowtower, watering each individual growing pod. The water is constantly recycled, reducing water use by 90% — compared to normal farming.

The basic kit comes with one tower, a base to hold the water with a recirculating pump, the net cups in each hole in the tower and other small necessities to get started.

Agrowtowers work best for leafy greens, herbs and strawberries. If you want to grow tomatoes, peppers and other, larger vegetables, he offers a Dutch bucket system.

When we toured his greenhouse, we were amazed at the tomato plants he has grown. They went from seed to full production with plants that became 7 feet tall in nine weeks. We saw full heads of lettuce that grew in five weeks.

He starts all of his seeds in rock wool, using a type sold for hydroponic gardening. Rock wool is molten rock spun into cotton-candy like fibers. It is a sterile medium.

He starts entire flats of seeds at one time, but home gardeners could cut the sheets of rock wool into smaller sections.

The rock wool comes ready to divide into cells, with each cell having a slot for one seed. Soak the rock wool until the media is saturated. Put a seed into each slot.

These seed trays could go into a greenhouse, but most people don't have a greenhouse. Artificial lights work very well. LED grow lights are readily available and much less inexpensive than when they first came out. (Agrowponics has them for sale on its website.)

Put the trays of seeds under lights in a covered chamber to keep humidity high.

Seeds will germinate quite quickly. The first leaves emerge in three to five days. They are called seed leaves, or cotyledons. You don't transfer the seedlings to the grow cups and towers until the second set of leaves appear. These "true leaves" look very different from that first set.

Each rock-wool cube with its seedling is then placed into a 2-inch net cup. Roots can grow through the net cup, which also allows the circulating water to enter. (If you are growing larger plants in the Dutch bucket containers, you set the cups on Hydroton expanded clay pebbles.)

The plants grow quite quickly with constant food and proper light, and they are free of pathogens often found in soil. This type of garden is weed-free and usually insect- and disease-free. There are many water-soluble fertilizers on the market, so experiment to find what works for you.

While the towers are most applicable to lettuces, leafy greens and herbs, he also has grown strawberries. The lettuces go from seed to table in five weeks.

In your home, a tower with a grow light could provide fresh lettuce and herbs year-round.

Shaffer's motto is: "Life is a gift, don't waste it!" And he certainly hasn't wasted time.

After putting in the Guatemala system, he finished his degree and then completed his masters in Germany, in renewable energy with a specialization in energy storage.

He set up a system in Cambodia similar to the one in Guatemala. He has traveled to 30 countries and lived in four.

He has a full-time job at Southwest Power Pool in Little Rock, yet he spends all his off time experimenting with new hydroponic/aquaponic systems to help end world hunger. All of this before the age of 30.

For a local "research site," he struck a deal with Sharon Giovinazzo, chief executive officer of World Services for the Blind, for a greenhouse in central Little Rock. The produce they raise in his trials there is used by Chef Pat Harris on campus.

Shaffer credits his success to the Arkansas Regional Innovation Hub and in particular Errin Stanger, who has provided a valuable launching pad for experimentation and research. Shaffer also has a partnership with the University of Arkansas at Little Rock, and interacts with student interns from diverse departments, including biology, web design, finance and business.

At his booth at the recent Arkansas Flower & Garden Show, he was taking names and email addresses for tours and a workshop showcasing what he is doing. Because of the covid-19 pandemic, these plans are on hold until public gatherings are safe again. Anyone who would like a tour when life returns to normal can sign up by emailing support@agrowponics.com.

To stay connected to what he is doing, learn more about hydroponics, or research making your own system, visit his website and Youtube channel. 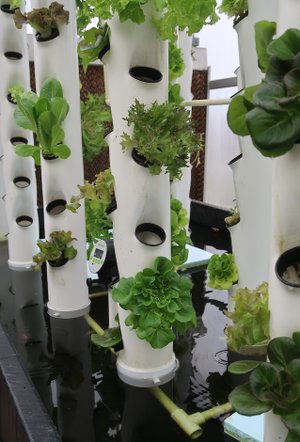 Lettuces do well in vertical hydroponic towers designed by Gunnar Shaffer's Agrowponics company. (Special to the Democrat-Gazette/Janet B. Carson)