Virus cases in state confirmed at 118 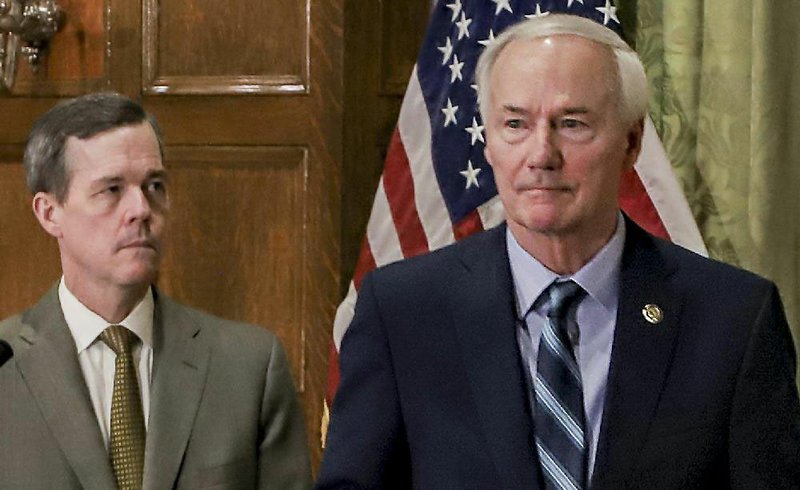 Dr. Cam Patterson, chancellor of the University of Arkansas for Medical Sciences, stands back as Gov. Asa Hutchinson exits a news conference on the coronavirus Friday at the state Capitol. More photos at arkansasonline.com/321govcovid/. (Arkansas Democrat-Gazette/John Sykes Jr.)

The total number of confirmed cases in Arkansas has risen to 118, according to the Arkansas Department of Health on Saturday.

The number of coronavirus cases in Arkansas reached 100 on Friday, including 14 resulting from an outbreak at a Little Rock nursing home, according to the state Department of Health.

Thirteen of the new cases stemmed from the outbreak at Briarwood Nursing and Rehabilitation in Little Rock, where another resident tested positive earlier this week after returning to the facility from a hospital, officials said.

Nine of the new cases are residents and four are staff members, according to the Health Department.

The cases identified since Thursday afternoon also included a resident of Apple Creek Health and Rehab in Centerton.

One other Arkansas nursing home resident, who lives at The Villages of General Baptist West in Pine Bluff, tested positive earlier.

Little Rock Air Force Base also announced Friday night that an active-duty U.S. Air Force airman at the base was undergoing evaluation and treatment after testing positive.

The airman is believed to have contracted covid-19 from recent travels, according to a news release.

Col. John Schutte, 19th Airlift Wing and the base's installation commander, declared a public health emergency for the base Friday. The emergency order is in place for 30 days.

[Video not showing up above? Click here to watch » https://www.youtube.com/watch?v=gE2gtBXtqno]

"Right now we have one confirmed case of covid-19 on our installation," Schutte said. "The safety of our Airmen, families and employees is our top priority."

Nursing home residents are considered especially at risk of developing serious complications from covid-19, the respiratory illness caused by the virus.

The infection among residents "is of great concern to us," Gov. Asa Hutchinson said Friday, adding that "appropriate health care actions are being taken."

"It simply shows that we have to stay on top of this, that we have to take seriously the admonition that we all have a responsibility to ourself and to our neighbor to take proper health care precautions, social distancing, make sure that we're not a carrier of this and we're going to impact somebody else's life," he said.

On Friday, 38 people tested positive, the most of any one day so far. The disease has now been identified in one-third of the state's counties, and Benton, Boone, Crittenden, Greene and Polk counties now all have their first cases.

At Briarwood, the first infection was discovered after a resident was transferred to a hospital, where the resident was swabbed for a coronavirus test, said Jennifer Dillaha, the Health Department's medical director for immunizations and outbreak response.

By the time the positive result came back from a laboratory, the resident had been taken back to the nursing home, she said.

The inspectors did not cite the home for any infection-control issues, Department of Human Services spokeswoman Amy Webb said.

After the department learned Wednesday that a resident had tested positive, the inspectors quarantined themselves at their homes, she said.

That precaution was taken on the advice of the Health Department, although it isn't known whether any of the inspectors are infected, said Jerald Sharum, the Human Services Department's chief official over provider quality assurance.

"That is an intensive process," Sharum said of inspections. "They were in there a lot through the course of the week. They talked to residents. They focused on some residents -- randomly assorted -- and they really get in close contact with them to see how they're doing and what care is being provided."

The Health Department is doing "contact tracing" to try to learn how the virus spread, Sharum said.

Health Department Secretary Nate Smith said that at the Pine Bluff nursing home the resident's infection is believed to have resulted from contact with a physician.

The physician is believed to have gotten the virus from the state's first known case -- a patient at Jefferson Regional Medical Center who tested positive on March 11.

The department is investigating how the virus got into the other facilities.

"What we are doing in each of those cases is working very closely with the staff and management at those facilities to test all of the residents, as well as all the staff," Smith said.

"We'll work very hard to try and limit transmission in that setting and to support any residents or staff or visitors who fall ill."

Even before the state's first coronavirus case was discovered, the state Health and Human Services departments directed nursing homes and assisted living facilities to begin screening visitors about their travel histories and possible symptoms and take their temperatures. Facilities were also directed to take employees' temperatures before every shift.

On March 13, the departments went further, directing facilities to ban visitors for 30 days unless the visit was medically necessary, or by law enforcement or certain other officials.

Rachel Bunch, director of the Arkansas Health Care Association, which represents nursing homes, said in a statement that it's difficult to prevent the spread of the coronavirus "because it has an incubation period of as long as 14 days and can be present in an asymptomatic individual."

Staff members at the nursing homes in Little Rock, Pine Bluff and Centerton "followed the [federal Centers for Disease Control and Prevention] guidelines for screening symptoms of COVID-19 and took immediate action," she said. "They contacted public health officials, implemented protective protocols and have begun the process of notifying residents, families and staff members. We are doing everything we can to ensure we stop the spread of COVID-19 within our facilities."

Inspections of the three nursing homes last year didn't turn up any infection-risk violations, according to federal Centers for Medicare and Medicaid Services data.

The data was analyzed by Kaiser Health News, distributed by The Associated Press and further examined by the Arkansas Democrat-Gazette for statewide information.

The Briarwood and The Villages nursing homes were among homes with violations in 2018. Apple Creek didn't have infection-risk violations during the time period studied.

At The Villages in December 2018, inspectors found that the staff had failed to properly clean a glucometer between uses on different patients, risking the health of nine residents.

At Briarwood, per a May 2018 inspection, the staff "failed to ensure" that soiled linens weren't stored with clean ones and that staff members washed their hands before and after administering medications, violations that risked dozens of residents.

Martha Deaver, president of Arkansas Advocates for Nursing Home Residents, called on officials to establish more testing for nursing home employees who come and go for their shifts.

Citing federal and facility decisions to close off the homes to visitors, Deaver said it would be "basic common-sense protection of these employees who are now the only ones who have access to the residents.

"Let's test the employees that have a carte blanche card to go in and out of [nursing homes]," Deaver said. "There's no restrictions to where they can go and come back and infect our most vulnerable citizens."

No nursing homes were found to be actively harming residents by violating infection-risk rules, per Centers for Medicare and Medicaid Services citation categories, but violations found posed the risk of potential harm.

That raised the total number of children known to be infected to eight, and the number age 65 or older to 26.

At the time that he spoke, the state had reported 34 new cases. That number rose by four when the department updated its website at 5:21 p.m.

Thirteen of the results came from the Health Department's laboratory, and 25 were from commercial labs outside the state.

Out of the 96 identified infections that were discussed during a news conference Friday afternoon, 71% were of white people and 17% of black people. The others were of a different race or the race was not known, Smith said. (Later in the day the number of cases rose to 100).

Health Department tests were pending on an additional 176 people, and 494 people were under home quarantine because they had contact with someone who tested positive or recently returned from an area with a large outbreak.

Hutchinson said Friday that he has allocated $30 million from the state's budget stabilization trust fund to buy masks and other personal protective equipment for health care workers that will be distributed by the University of Arkansas for Medical Sciences to providers based on the Health Department's priorities.

"Local hospitals will participate in the bulk purchase and each will pay its portion of the overall purchase," the governor's office said in a news release.

Attorney General Leslie Rutledge also announced that she is allocating $3 million in lawsuit settlement funds to make loans of up to $250,000 each to help businesses make payroll and stay in operation. That adds to $4 million that Hutchinson allocated earlier from his quick action closing fund.

Hutchinson also said the U.S. Small Business Administration had approved his request for a disaster declaration allowing businesses to receive loans of up to $2 million to provide working capital.

On the day when his directive went into effect limiting bars and restaurants to carry-out service and delivery-only, Hutchinson said he had heard from business owners who were worried about future restrictions.

Factories and other businesses can continue operating, although it's recommended that they take steps such as screening employees for symptoms and allowing for space between employees, Hutchinson said. Any additional restrictions by the state will be "based upon the health care guidance and the circumstances in Arkansas."

"We expect them to take the proper precautions, but there's no intent to have further business closings or reduction of manufacturing capacity in Arkansas at the present time," he said.

Information for this article was contributed by David Wilson of the Arkansas Democrat-Gazette. 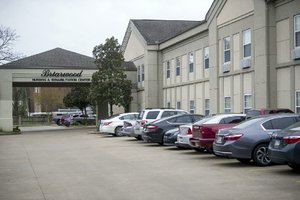 Thirteen new coronavirus cases were from an outbreak at Briarwood Nursing and Rehabilitation in Little Rock. The number of cases in the state reached 100 on Friday. More photos available at arkansasonline.com/321virus. (Arkansas Democrat-Gazette/Stephen Swofford)