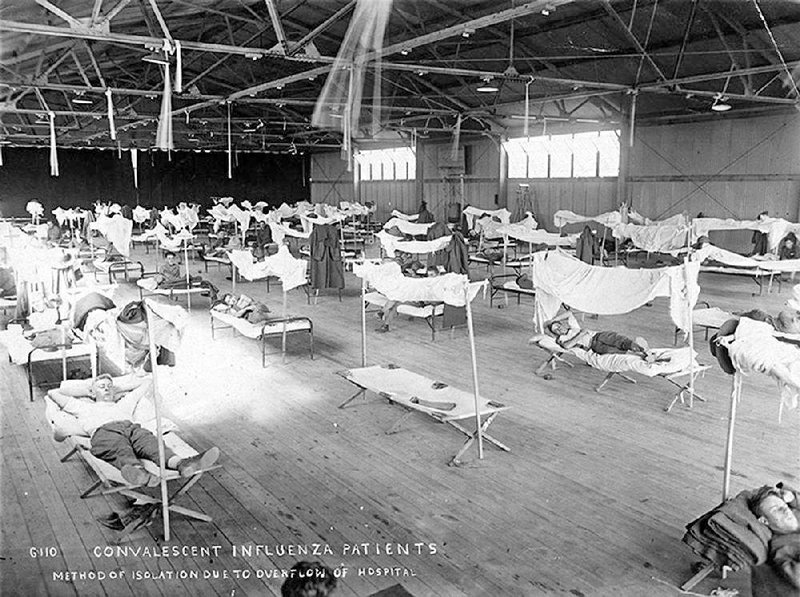 Soldiers convalesce from the flu in 1918 at Eberts Field in Lonoke in an overflow ward because the hospital was overwhelmed with patients suffering from what was called “Spanish influenza.” (Courtesy Photo/Butler Center Research Services Division)

"In Little Rock you had to put out a placard at your home if you had someone with a case of it living there," said Brian Irby, a state archivist. "If you didn't, you were charged a $25 fine. That was good money back then," he said.

Irby's been researching Arkansas' reaction to the previous pandemic to hit the state, Spanish flu, in light of the current covid-19 outbreak. He found the figure for Fort Smith and others from 1920: 125 new cases on the same day in Star City, southeast of Pine Bluff, and another 100 in Arkansas City on the state's eastern border.

Arkansans are much better equipped to fight a pandemic now than they were in 1920, historians and medical experts agree.

The Spanish flu created the most similar situation to what Arkansas faces now, Irby said. In both instances, no vaccine existed for a highly contagious virus strain.

Medical science -- including knowledge to inform state and local decisions -- has made huge advances since 1920, said Dr. Frank Griffin. Griffin is a medical doctor who also holds a law degree and is the University of Arkansas' health scholar in residence.

States retain broad powers such as quarantine, Griffin said. But they are also bound by federal court rulings stretching back to the first U.S. Supreme Court cases challenging those powers in the 1790s, he said. Those court rulings consistently say the restrictions imposed by states, counties and cities must be reasonable, Griffin said. What are and what are not reasonable precautions against the spread of disease is constantly being defined, he said.

While the state can restrict a resident from leaving home, it cannot easily remove someone from that home, Griffin said. State law says if a person can be treated with reasonable safety to the public health, "he or she shall not be removed from his or her home without his or her consent, or the consent of the parents or guardian in the case of a minor."

The weapon of choice Arkansans are employing now to slow the disease's spread is the same used almost 100 years ago: avoiding crowds, or, in modern parlance, social distancing, Irby said. Even with that method, contemporary Arkansans fare far better than their ancestors in substantial ways, said Irby and Allyn Lord, director of the Shiloh Museum of the Ozarks in Springdale. Griffin agreed.

"There was nothing like the products we have available now: good quality soaps, disinfectant wipes and all kinds of cleaners," Lord said in a telephone interview. While Arkansans in 1920 certainly had cleaning supplies and some quite harsh ones, they did not have them in modern abundance, variety and in such easy-to-use forms, she said.

Besides a century's worth of advances in medical knowledge about preventing the spread of disease, the progress on how to treat illness when it still happens is vast compared with 1920, Griffin said.

"There have been major advances in intensive care treatment, for instance," he said. "We have respirators."

Another big difference between 1920 and 2020 is coordination. The state and federal governments have fully involved themselves in the covid-19 response along with local governments.

Gov. Asa Hutchinson has ordered all public schools closed. Such decisions were left to local authorities in 1920 Arkansas, which lacked the communication and transportation systems of today. State officials felt that the local governments knew best.

"I was just reading a story in the [Arkansas] Gazette from Feb. 4, 1920, where Dr. C.W. Garrison, state health officer, was saying that he was not interested in imposing a statewide quarantine and would leave it up to local communities to do so," Irby said in an email.

He included a quote from the Gazette by Garrison: "All boards of health have ample authority to quarantine a locality where conditions demand it. It is not my purpose to quarantine the entire state. I shall depend upon local authorities, who are expected to confer with school boards and representative citizens to issue quarantine orders."

County judges and mayors across the state continue to tailor approaches to the coronavirus for their communities, closing offices, and canceling meetings and events.

Fayetteville Mayor Lioneld Jordan announced Tuesday that all bars and restaurants in the city will be limited to 50% of their occupancy as set by the fire marshal. They must also space tables and bar stools at least 6 feet apart and limit party sizes to fewer than 10 people as the federal Centers for Disease Control and Prevention recommends. Two days later, Gov. Asa Hutchinson ordered all restaurant dining rooms closed, limiting the businesses to take-out and delivery orders.

"Maybe the big lesson we learned from what happened in 1920 is: It ended," he said. "It'll pass. The quarantine will be lifted, and people will get back to their former lives."

Another advantage that modern-day Arkansans have bears mentioning, he said. Today's homes have a comparatively boundless number of entertainment options.

"They must have gone nuts," he said of Arkansans cooped up at home in 1920. There was no television and, for most homes, no radio nor even electricity.

"Even when they were able to go out again, the vaudeville shows weren't very good because the players did not have time during the quarantine to rehearse their acts," Irby said. "But people had movies."

The biggest difference so far between this outbreak and the one 100 years ago is the death toll, figures show.

"In Arkansas, the flu killed about 7,000 people, several times more than the state lost during World War I," according to the Encyclopedia of Arkansas, a service of the Central Arkansas Library System. Arkansas' population was less than 1.8 million in 1920, about one-half of today's total, according to U.S. Census Bureau figures.

Arkansas was particularly hard hit because Camp Pike, now known as Camp Robinson, near North Little Rock was set up as an Army basic training camp when the U.S. entered World War I in 1917. The worldwide flu outbreak started that year among U.S. soldiers in Kansas and spread as they deployed to fight in Europe.

"The disease spread to rural areas of Arkansas, where many deaths likely went unreported. It cannot be determined how many rural residents died because of several factors: lack of medical care in isolated areas, no telephones or other means of communication, lack of literacy skills to record the deaths, and no cemetery records since many were buried in unmarked graves in family burial grounds. Sometimes entire families, too weak to draw water or cook their own food, died of the disease, thirst, or starvation."

"Race was also a factor in the high death rate. In response to pleas from Arkansas and elsewhere, one national medical publication stated, 'No colored physicians available.'"