They’re aghast at notion of cutting payout to shareholders by Laura Hurst and Kevin Crowley Bloomberg News | March 22, 2020 at 1:57 a.m. 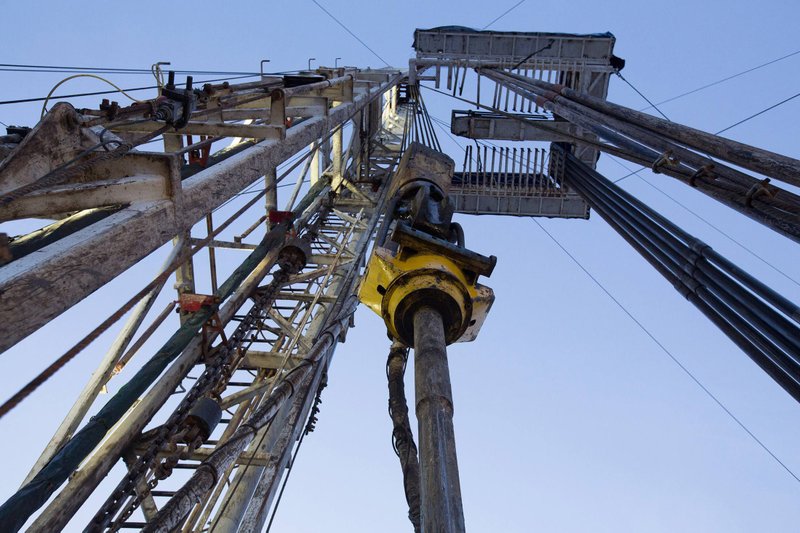 An oil derrick in an oilfield in Otrada, Russia, on March 5, 2016. MUST CREDIT: Bloomberg photo by Andrey Rudakov.

To understand the crisis engulfing the world's largest oil companies, just look at their dividend yields.

Exxon Mobil Corp., for decades considered one of the bluest of blue chip stocks, is paying investors 10%. For Royal Dutch Shell, the Anglo-Dutch giant that hasn't cut payments to shareholders since the Second World War, its 12-month dividend is equivalent to 14% of its current share price. BP offers a yield of 12.4%, and France's Total 11%.Yields at those levels typically suggest one thing: a significant risk that shareholders may not get the money they've been promised.

No executive of a big oil company would ever accept that's true -- at least for now. Even as management teams confront both the catastrophic demand destruction wrought by the spread of coronavirus and an oil-price war between Saudi Arabia and Russia, they're determined to keep paying.

"Nobody wants to be the CEO who cuts the dividend," said Noah Barrett, a Denver-based energy analyst at Janus Henderson Group, which manages about $375 billion. "They understand that any company that cuts, its shareholders will flow into competitors and be very, very hesitant to ever come back."

To buy time, they're taking the ax to capital expenditures. Exxon partially reversed course on an ambitious spending program on Monday, saying it's weighing significant cuts after being downgraded by S&P Global Ratings. Shell's outlook was revised to negative last week by the agency, and risks a rating downgrade unless it lowers its leverage and increases funds from operations.

Shell, Chevron Corp. and Total may also choose to save money for dividends by reducing their share-buyback programs, which are typically seen by investors as more discretionary than the quarterly cash payouts.

Chevron said earlier this month that it's reviewing options for cutting capital spending and curbing short-term production. BP Chief Financial Officer Brian Gilvary said the British major could curb spending by as much as 20% this year.

While market expectations for dividends at big oil companies have reduced over the past two weeks, pricing in a 37% cut from 2019 dividends for European majors in 2021, Goldman Sachs analysts including Michele Della Vigna said that they do not expect a cut because of the current environment. "In past oil downturns, Big Oil on aggregate did not respond to challenging macro conditions through material dividend cuts," they said in a research note last week.

Even before the crash in prices, big oil companies were in a difficult place. The industry was the worst performing part of the stock market as investors fretted about its ability to navigate the energy transition, invest enough in keeping their businesses going and meet their obligations to shareholders.

"The situation as it stands looks pretty challenged for most of the oil majors, if you were to assume that prices will persist at these levels," said Nick Stansbury, head of commodity research at Legal & General Investment Management, one of the largest shareholders of major oil companies. "If it sticks for six, nine months, then there will be serious questions raised about the sustainability of dividends."

These companies' sheer size gives them the financial flexibility to allow business to continue even in times of significant hardship. Beyond lower spending, Europe's oil companies could opt to pay dividends to investors in scrip, where cash is substituted with new shares. BP's Gilvary said this is one tool in his armory, but the company isn't considering it right now.

Letting debt rise is another option, but Exxon's downgrade shows the limit of that strategy. "They're going to have to lean on the balance sheet," Barrett said. "At some point though, borrowing to pay the dividend is not sustainable."

Shell declined to comment on its dividend. Exxon spokesman Casey Norton referred back to CEO Darren Woods' comments at the March 5 investor day when he said the company is "committed to a reliable and growing dividend." The company has increased the payout each year for the past 37 years.

Maintaining and growing Chevron's dividend is "top priority," spokesman Braden Reddall said by email, reiterating comments earlier this month from CEO Mike Wirth, who said Chevron is on track to raise its annual per-share payout for the 33rd time in 2020.

The flood of Saudi crude onto the market, coupled with slumping demand as the world's largest economies stop people from traveling and spending, threaten to create an unprecedented oil surplus that could weigh on prices for a long time.

In an enduring slump, Shell's first remedy would be to revise its share-buyback program. Chief Executive Officer Ben van Beurden already said in January the company would probably miss its target of buying back $25 billion of shares by the end of this year if the macroeconomic environment didn't improve. Since then, oil prices have fallen by almost half.

Investments in clean energy could also suffer if there's a lasting downturn. The big European oil companies have been outlining increasingly ambitious strategies to tackle their carbon emissions that will, eventually, require significant capital expenditure.

BP is the boldest so far, saying it will eliminate all its emissions from its own production and operations by 2050. Shell and Total have also made pledges to reduce emissions.

While it's unlikely that European oil companies will backtrack on their green commitments, low crude prices are typically not good for alternative energy, said Stansbury.

Some oil companies, notably Occidental Petroleum Corp., have already responded to the current slump by cutting dividends. The debt-laden explorer will reduce its 2020 payment by about $2.2 billion, or 86%, setting up CEO Vicki Hollub for a showdown with investors to determine her future.

If Occidental's decision sent a tremor through the market, then a dividend cut from BP or Shell would cause an earthquake. Those two companies paid out $22 billion in 2019, 20% of the FTSE 100 dividends. U.S. counterparts Exxon and Chevron hold the second and ninth spot as dividend payers on the S&P 500.

Persistent periods of low prices can dramatically reshape the industry. Between 1997 and 1999, Saudi Arabia competed against Venezuela for market share, sending Brent oil prices to as low as $10 a barrel. A wave of mergers followed, creating the era of the supermajors -- Exxon coupled with Mobil, BP bought Amoco, Total combined with Elf, and Chevron merged with Texaco.

Throughout this turbulent history, these companies have managed to translate a very volatile commodity into dependable cash flows. If European oil companies can no longer fulfill that role it would be a serious concession, said Legal & General's Stansbury.

"Cutting the dividend is "a decision no CEO wants to be associated with," says Russ Mould, investment director at U.K. asset manager AJ Bell. "It can cost you your job."