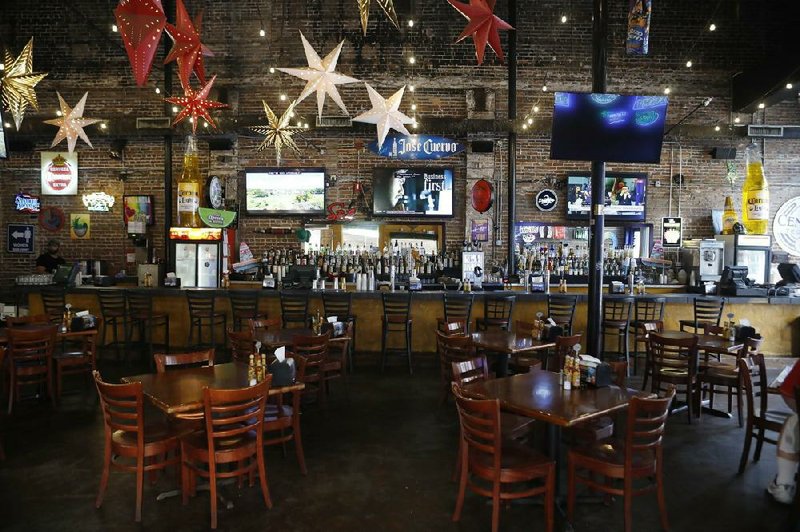 The Tequila Mexican Restaurant sits nearly empty last week in the Ybor City neighborhood in Tampa, Fla. The city of Tampa delivered iars to local bars and restaurants informing them to expect an announcement of mandated closures to help prevent the spread of the coronavirus. (AP/Octavio Jones)

NEW YORK -- A restaurant owner wonders how she can stay in business if she can't sell food and drink.

A hair salon operator shuts down to protect his clients and employees.

A photographer who expected to take pictures at an Ivy League school has lost that work now that classes have moved online and campus events are canceled.

Across the country, in industries of every kind and size, the coronavirus outbreak has devastated small businesses. If they haven't been ordered to close by government officials, many are shutting down out of concern for employees, customers and clients or simply because business has vanished. Those that are still managing to operate are struggling mightily.

Among the most hard-hit are restaurants, which have had to stop serving diners onsite as government officials in states, counties and cities have ordered them to close to try to contain the virus's spread. At The Barrel Room, a restaurant in San Francisco's financial district, Sarah Trubnick had already laid off two-thirds of her staff because of slow business before closing down altogether, along with many other restaurants and bars in the Bay Area.

Trubnick's restaurant isn't set up for permitted takeout and delivery. But she's keeping some staffers working on maintenance and refurbishing projects she had long put off.

"This allows us to maintain health care and reasonable pay for everyone," she says. "We can sustain this for about two months but have had to defer debt payments and negotiate rent payments."

"If this situation lasts more than two months," she adds, "we will need financial assistance."

Small businesses are a vitally important economic sector of the economy, and their hardships constitute a grave threat to the U.S economy and to tens of millions of workers and their families. There are nearly 31 million small businesses in the U.S., according to government figures. They range from florists and bakeries to barber shops and hardware stores to small factories, restaurants, bookstores and hair salons. Last year, 52% of Americans who were employed in the private sector worked for businesses with fewer than 500 employees. Roughly one-quarter worked for companies with fewer than 50 employees.

Because so many small businesses lack the cash reserves and credit that's typically available to larger companies, they are often highly vulnerable to disasters like the coronavirus outbreak. And many don't survive. By some estimates, between 170,000 and 200,000 small companies failed during the last recession. Many business owners also don't have the luxury to build rainy-day funds. Rather, their cash flow goes to payroll and other regular costs, as well as to such other expenses as renovations and expansions.

For small businesses with debts outstanding and little or no revenue coming in, making loan payments may be impossible. Outstanding small business loans -- those under $1 million -- totaled $370 million at the end of 2019, according to the Federal Deposit Insurance Corp. That figure doesn't even include loans from online banks or from private sources like other companies, relatives and friends.

"If you're running a restaurant or low-margin business," Marks says, "you're really vulnerable when you start up and in the first few years."

Likewise, companies owned by women and members of minority groups may be in particular danger now because they struggle disproportionately to obtain to credit that would tide them over during crises.

Business at Sweetcatch Poke, a five-restaurant chain in New York, began falling March 6 and by mid-month, it was down 80% from the previous week. Now limited to takeout and delivery, owner Frank Vellucci has had to reduce employee hours. He now has enough work for about 25 workers, down from his usual 45. Shifts have been cut in half.

"I'd rather put more people on the schedule and am actually giving them four hours instead of eight," Vellucci says. "That way, I can get more people getting some income." For the time being, he plans to keep all his locations open.

But Mark Garrison has closed his Manhattan hair salon. Though New York City officials haven't shut down salons, "we have to do the socially responsible thing," Garrison says.

He will keep his 12 stylists and colorists on partial pay while they're not working, but his office staff will work from home.

Garrison expects to be closed at least two weeks. He's well-aware, though, that it could be longer, which would make it hard to pay bills, including $15,000 in property taxes each month.

"How far can I really go before we're out of business? I don't even want to entertain that thought."

The federal government has taken steps to make Small Business Administration disaster loans easier to obtain. They're now available statewide in states that are hard-hit by the virus, rather than limited to specific counties or parishes where companies have suffered substantial losses. The SBA also said in a statement that it had reminded lenders that they could defer loan payments for six months.

For now, work has fallen off at many businesses as customers and clients have sharply reduced spending. Everyone is worried about making big commitments amid an uncertain economy and tumbling stock market.

"All of our projects are either on hold or are almost finished with construction," says Leslie Saul, owner of an architect and design firm that bears her name in Cambridge, Mass. "We literally have zero income coming in, so we know that every hour that we pay staff is an expense."

Saul struggled over whether to furlough her staff. In the end, she decided to pay them 40% of their salaries. She realized there was still work they could still do, and they could be ready to roll once they're back to work as usual.

The near-complete cancellation of events across the country has left many business owners who are freelancers or who work in the gig economy vulnerable or in limbo.

Cornell University suspended classes at its Ithaca, N.Y., campus and told students they should return home and begin online classes April 6. Photographer Tom Hoebbel, who expected to spend the spring shooting events at Cornell, now finds himself with an empty schedule and an enormous revenue shortfall.

"It's usually a huge percentage of what I do, so it's going to have a huge impact," Hoebbel says.

Finding work to replace his Cornell gig may prove impossible. Other schools are closed. Though he can approach businesses, Hoebbel says, "they're cutting back or cutting hours, and they don't know where their money is going to come from. Everything is just up in the air."

The outbreak has hit just as many owners were preparing to sell crafts and other products at spring fairs, markets and shows. About half of Patti Gibbons' annual revenue come from events in Washington state, where she sells personal products under the label Heavenly Soap. But many events have been canceled or rescheduled, and Gibbons, who usually attends as many as 50 a year, worries about how many she'll be able to go to.

The uncertainty has left her rethinking her business model and focusing more on online advertising for her e-commerce site and store in Monroe, Wash.

"I'm spending more time on online marketing -- I have my first ad on Instagram and I'm using Facebook more," Gibbons says. "I'm making sure all my customers know that I have a website."