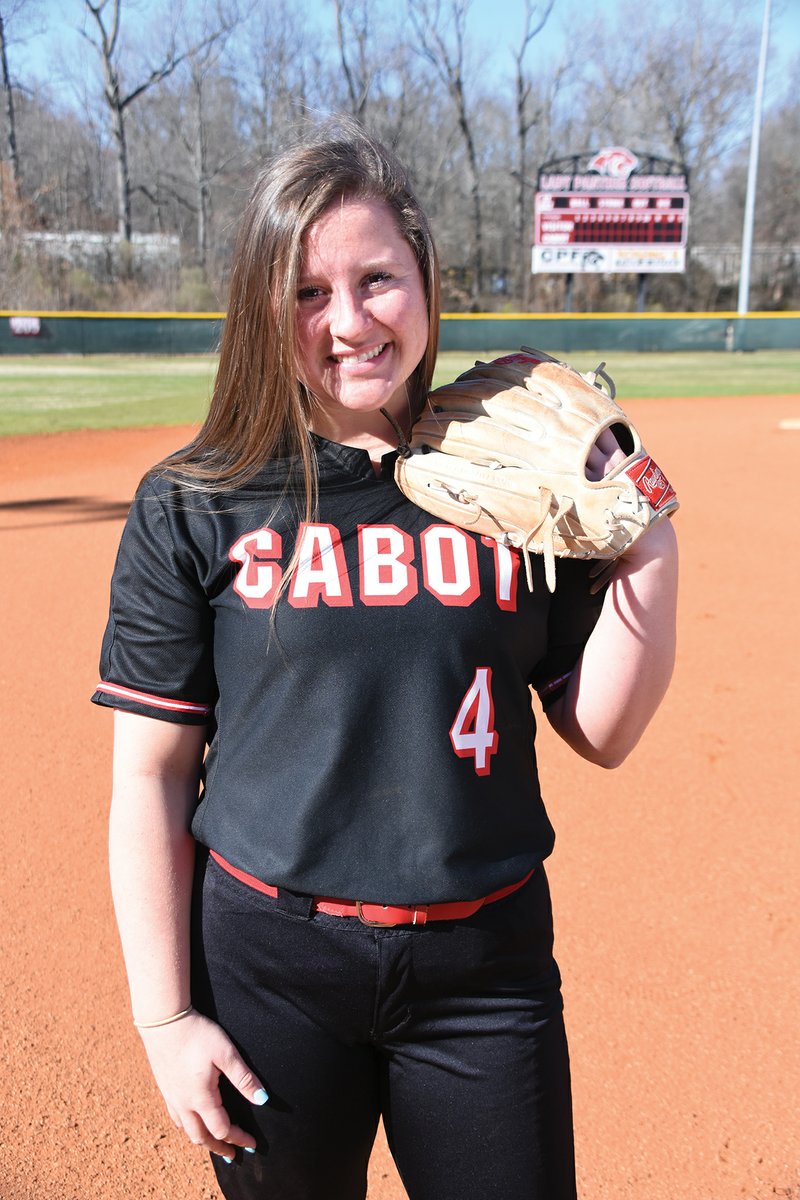 Grace Neal led the Lady Panthers by hitting .474 with a school-record 12 home runs last season, in which Cabot won its first state softball title. Neal was walked 12 times and struck out just 3 times in 2019. ( Staci Vandagriff)

“She’s got a great attitude,” Cope said. “She is a very hard worker and one of the best kids we have. If she’s having a bad day or not having a very good practice, it’s not uncommon for her to say, ‘Hey, Coach, I need some more ground balls’ or ‘Can you stay another 30 minutes to throw me some more balls in the cage?’ She is just one of those kids who wants to get it done. That’s what she does.”

Cope said Neal is often joined by other players who also want extra swings or ground balls. It’s that work ethic that helped Cabot win its first state softball title in school history last season. Neal paced the Lady Panthers by hitting .474 with a school-record 12 home runs. She was walked 12 times and only struck out 3 times.

“She was one of our better players on the team,” Cope said. “We knew when she got to the plate, we had an opportunity to score some runs. Even if we needed her to bunt, she is a very good team player and someone we can count on.”

For her efforts, Neal was named the Arkansas Democrat-Gazette Three Rivers Edition 2020 Softball Player to Watch.

Neal, who owns a 3.8 cumulative grade-point average and 4.2 this year, fell in love with softball at an early age.

“I did a bunch of dance and stuff and didn’t like it,” Neal said. “My dad and grandpa played slow-pitch softball for a long time, and Dad put me in softball and coached the first team I played on. I just loved it and never stopped playing it since I was about 4 years old.”

Being the best was something that drove Neal even in the beginning. She said she’s played travel softball for as long as she can remember.

“I’ve always been really competitive, even at a really young age,” said Neal, who also played varsity volleyball at Cabot. “I think I could be competitive in my own way but be on a team in softball. I picked it up really well, and it was something I knew I wanted to do.”

Neal was good enough as a freshman to crack the starting lineup. Cabot enjoyed team success but was bounced in the semifinals by Bentonville each year. Neal played a major role in getting the Lady Panthers the hardware last year.

She played multiple positions, including all of the outfield and second base. Cope said that in three years, the only positions Neal hasn’t played are catcher and pitcher. At the end of the season, Cabot was matched with arch nemesis Bentonville again — this time in the championship game, which marked the third time a Cabot team had advanced that far. Most considered the three-time defending-champion Lady Tigers an overwhelming favorite, including the Lady Panthers.

“They had won it before and weren’t as nervous as us. Statistically, it was all in their favor,” Neal said.

Before the team left for the state finals in Fayetteville, Neal said, they met and discussed their nerves and that every player would need to play their part in the win.

“I just couldn’t believe it,” Neal said. “The first thing I did was cry and hug my teammates. It took a while for it to really set in that we had really done it. It was not in our favor at all.”

After the big win, Neal focused on making a college decision. Neal was very familiar with NCAA Division II program at the University of Arkansas at Monticello after attending camps there. Longtime legendary coach Alvy Early had succumbed to cancer in June 2018, but Neal was still very interested in the program, even though some thought she was too talented to play at a smaller school.

“A lot of people were asking me why I didn’t play D-I and saying that I was too good to play at UAM,” she said. “It was a really hard decision, but I wanted to go to a smaller school and make a name for myself. I wanted to start as a freshman. I didn’t want to go D-I and sit the bench like a bunch of freshmen do. UAM just felt like home to me.

“I have gone to Cabot my whole life, and it is such a big district, and I was just ready to make it a little bit smaller and more like home.”

New Cotton Blossoms coach Kyle Lem, a former UAM assistant under Early, is a friend of Cope’s and thinks Neal will fit in well on the team, which finished 25-27 in 2019.

“I think I can go in and help them right away,” Neal said.

But before she heads to Monticello, she has a state title to defend. With a core group of starters returning, the Lady Panthers will be a favorite to repeat their win.

“I have a really good feeling we can win it again,” she said. “It’s going to take a lot of hard work. Everybody’s coming for us, and we have a target on our back, and hopefully, we can show everyone that wasn’t a fluke. We were a real team playing together, playing our hearts out.”

And the state-title defense has only made for longer days for Cope, which he doesn’t mind.

“[Neal] is a leader for the younger ones to see what it takes,” Cope said. “We have won since she’s been here.”