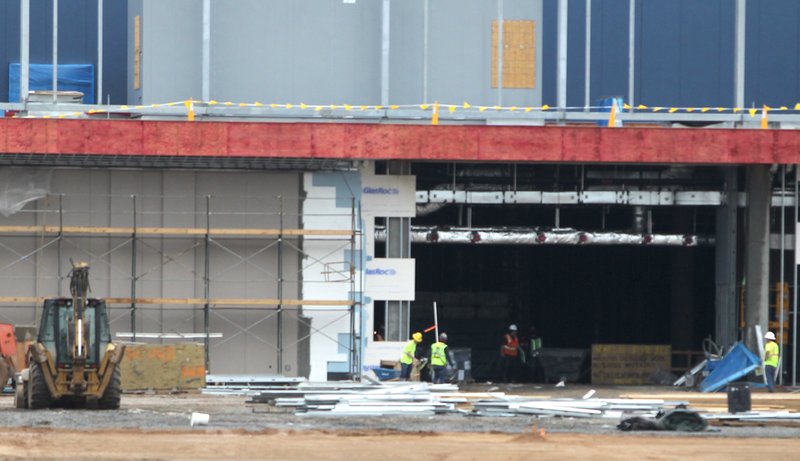 Gov. Asa Hutchinson on Tuesday ordered the state's three casinos -- Oaklawn in Hot Springs, Southland in West Memphis, and Saracen Casino Annex in Pine Bluff -- to close for the remainder of March as one of the efforts to limit the spread of covid-19.

Those closures affect hundreds of employees who work for the casinos and temporarily shuts off a flow of revenue amounting to hundreds of thousands of dollars monthly to the state and to the cities and counties that benefit from gambling revenue.

Oaklawn Racing Casino Resort had already closed its casino Monday at 8 a.m., according to a news release. The release said Silks Bar and Grill, Bistro 2705 and the Sports Book, also closed.

According to the release, the approximately 1,000 employees of the casino and the track who are affected by the shutdown will continue to receive full pay and benefits for two weeks.

Jennifer Hoyt, media relations manager for Oaklawn, said that so far no plans have been made in the event the shutdown is extended beyond March.

Hoyt said Oaklawn officials have no estimates yet for what impact the shutdown is likely to have on revenue.

The release said casino managers would communicate as quickly as possible with employees to assist them during the shutdown. The announcement did not say how many employees are affected or what assistance will be available.

John Berrey, chairman of the Quapaw Nation of Oklahoma, said by phone Tuesday that about 300 employees at the Saracen Casino Annex and Q-Store will be temporarily idled. That casino halted operations Tuesday at noon. The Q-Store closed at 6 p.m.

"I think we want to be in compliance with what the president is doing, and we want to be smart and protective," Berrey said. Downstream Casino in Quapaw, Okla., with 1,100 employees was also shut down and will remain so through at least March.

Berrey said Downstream Development, the parent corporation that heads up casino operations for the Quapaw Nation, is working to ensure that employees are taken care of during the shutdown.

"It's fluid, but right now we're paying people for two weeks," he said.

Construction operations on Saracen Casino Resort, he said, will continue for the time being. He said no plans have been made to suspend construction, but security is in place to ensure that only authorized employees enter the site, and steps are being taken to intervene if anyone begins showing symptoms of infection.

"It's a day-by-day thing," Berrey said. "We're instituting all of the CDC testing procedures for cleanliness, and we're locking down the site to make sure only authorized personnel are on the property, but as it stands right now, we're still at full tilt construction."

Carlton Saffa, project manager for Saracen Casino Resort, said the decision was made Tuesday afternoon to close the Q-Store, but he said pay-at-the-pump gasoline pumping service will still be available.

On Thursday, Saffa said he had learned of an extra level of sanitation being undertaken by the employees who are still on duty to maintain the facility.

"I stopped by to get gas and noticed the pumps were wet," he said. "I called someone to ask what was going on, and they told me they are applying disinfectant to the pumps every half-hour. This is definitely being taken seriously."

Saffa said all perishable foods in the Q-Store is being sent to area food shelters.

Dorethea Yates, director of finance and treasurer for Hot Springs, said the city normally gets about $300,000 a month in casino tax revenue from Oaklawn.

So, this month, they'll get half that.

"It becomes a problem if it goes on for a while," she said. "Obviously, that's money we'd like to have, but half a month is not going to devastate us."

Hot Springs Mayor Pat McCabe said he's worried that the other tax collections will be down as well because of the coronavirus. Hot Springs has a 3% advertising and promotion tax on prepared food and lodging, a 1% city sales tax and a one-half percent public safety tax.

"Our revenue for the city of Hot Springs really comes from the sales taxes," he said. "We don't have property tax. It's going to be very impactful to our tax receipts."

Susan Ashmore, the Garland County comptroller, said she couldn't estimate March casino revenue because she didn't have a previous March for comparison purposes. (August was the first month that Oaklawn paid the current tax rate.)

But the January and February numbers (based on casino revenue collections in November and December) were $124,970 and $126,516.

If the March numbers were similar, then closing the Oaklawn casino for half a month would cause a decline of about $60,000 in casino revenue to Garland County.

Thompson said the county has reserves and is conservative in its handling of projections.

"We won't suffer too badly on this," he said. "In the short run, it won't be detrimental but if it were to go into months, we'd have to start looking into things pretty closely. If we were not ever going to get any casino money again, it would be detrimental."

Thompson said Southland accounts for about one-third of the county's general fund revenue, which was $614,000 in February.

"It's a big number, but [workable] as long as it doesn't stay closed too long," he said.

Gerald Robinson, count judge for Jefferson County, said the county general fund currently receives $40,000 to $50,000 a month from tax receipts paid by Saracen Casino Annex and the county can withstand even an extended shutdown because of the way that money is budgeted.

"We're treating the money as if we don't have it anyway," Robinson said. "We're putting all of it into our reserve fund, and so far we're doing OK without having to use it."

Robinson said the only effect the county is likely to see is a drop in the amount of money it puts into its reserve fund.

Pine Bluff, on the other hand, could feel the pain of an extended shutdown as it is using most of the $112,000 it averages per month from the annex to pay for raises for city employees, particularly public safety employees.

But, Mayor Shirley Washington said, because the city has been putting $10,000 to $12,000 a month into reserve from that money since it began flowing into city's coffers in November, it would take a shutdown of several months in duration to have an effect.

"So far we've been getting a little more than what we've budgeted into the account," Washington said. "So it just depends on how long this is closed, but we should be OK."