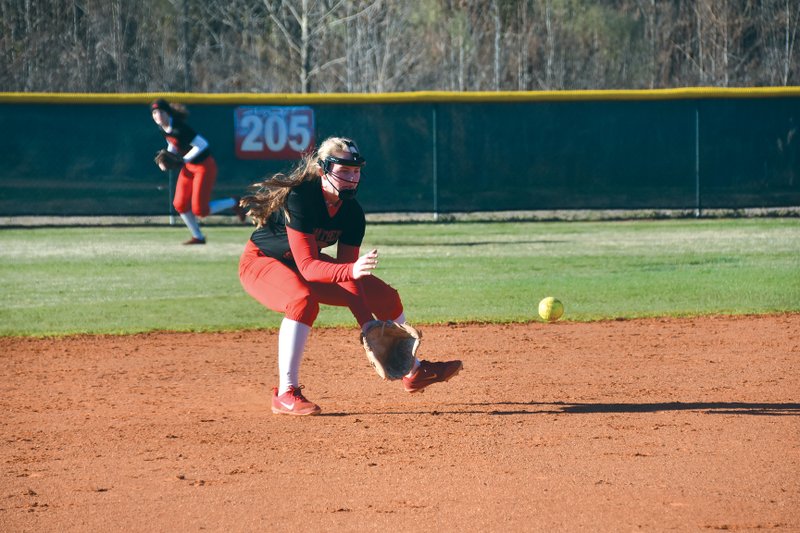 With a core group of veteran players returning from last season’s Class 6A state-championship club, Cabot softball coach Chris Cope isn’t shy about his expectations for this season.

“I guess expectations would be again to put ourselves in the same situation as we finished the 2019 season and make it to the finals of the state tournament,” said Cope, who led Cabot to the school’s first softball state championship. “It will be a difficult challenge with there being so many good teams that we will play. We just hope to improve each game and survive our strong conference and try and be contenders for a conference championship and make it to the state tournament.”

One of the major reasons for Cope’s optimism is senior third baseman Grace Neal. The University of Arkansas at Monticello signee is among the better players in the state, regardless of class. Neal begins her fourth year as a starter and has played every position on the diamond except pitcher and catcher. She hit .474 with

12 home runs and 47 RBIs while drawing 20 walks and striking out just 3 times a year ago.

Fellow senior and four-year starter Aubrey Lee is the first baseman and is almost as dominant at the plate as Neal. Lee has hit over .400 the past two years, including .445 with 8 homers last spring with 41 RBIs. She is committed to Hendrix College in Conway.

Senior Rylie Hamilton is a four-year starter at shortstop and has impressed the coach with “a great glove and good range.” The Southern Illinois University commit hit .480 with 5 home runs last spring.

Junior catcher Savannah Snow “played a few games” at first base a season ago and was the everyday designated player in the batting lineup, hitting .292 with 2 home runs. She is in her first season as the starting catcher.

Pitcher is the one position that has troubled Cope a bit in the offseason. Senior Layne Smith was 5-0 last season but is the only hurler with varsity experience. Cope said freshman Akayla Barnard and sophomores Paige Pierpoint and Brianna Garriga could see some innings in the circle.

“Pitching would be a big concern coming into the season because the girls we will be counting on have very little varsity experience,” Cope said. “But they have been working extremely hard, so I think they will be up to the task.”

Senior center fielder Riley Walthall leads the outfield group. The reigning state finals MVP is a contact hitter with some pop at the top of the lineup (.356, 5 home runs in 2019) and “has a strong arm, good speed and will track down a ball,” the coach said.

Senior Kirsten Jones is a favorite to win one of the remaining outfield jobs. Barnard, Pierpoint and freshmen Emma Holland and Jordan Williams are also competing for outfield spots, Cope said.

“Another concern would be inexperience in the outfield,” Cope said. “[Riley Walthall] is our only full-time starter in center field. Layne Smith would be another starter, but she will be pitching a lot.”