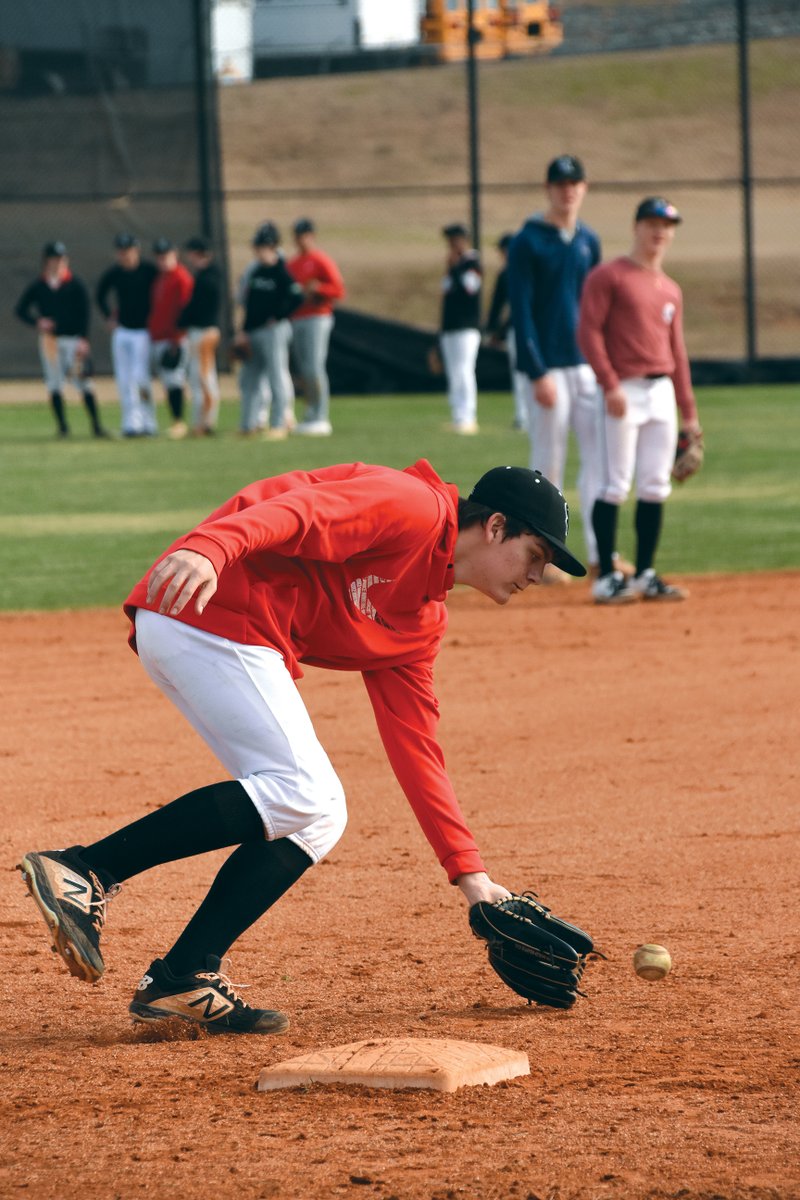 Searcy freshman Kade Ivy fields a ground ball at a practice. The Lions finished 7-19 a year ago, missing the playoffs for the first time in seven years.

The Searcy Lions finished 7-19 a year ago, missing the state playoffs for the first time in the seven years that head coach Matthew Davis has been at the helm.

Fortunately, the Lions have nine seniors returning this year.

“For the past few years, we have been on the younger side of the game,” Davis said. “We have had to play a lot of guys who are sophomores. This year, we have nine seniors, which is more than we have had in a while.

Returning this year is senior shortstop and pitcher Tanner Leonard. He had a batting average of .392 with an on-base percentage of .467 with 10 walks and only 5 strikeouts. He also had 12 stolen bases and 28 runs scored.

“He puts a lot of extra time in on his own, coming in almost daily to get that extra work in,” Davis said. “He is very focused on what he does successfully and is knowledgeable on what he needs to get better at.

“He has improved his approach at the plate and has really put in the work in the weight room to get stronger. He is just that kind of kid. He takes the time to study his craft, which is a rare thing for a kid his age.”

Leonard has already signed with the University of Central Arkansas in Conway.

“UCA has been after him for a couple of years now,” Davis said. “He is excited, and we are excited for him.

“It is a chance to get up there and make an immediate impact. He will be a player that UCA is really happy to have.”

Davis said senior Kyle Burton is the team’s best power hitter. He averaged .304 a year ago with a .418 slugging percentage, including 4 doubles, a triple, a home run and 12 RBIs.

“Fundamentally, he’s really worked hard to improve the small things,” Davis said. “He is up there at 7 a.m., or anytime the cages are open. And he is there with a purpose to improve those fundamentals of his swing and is very conscious of what he is trying to do.”

Burton also works as a middle relief pitcher, making 13 appearances last year. He had an ERA of 4.41 with 25 earned runs, 21 strikeouts and 17 walks. Burton has received interest from Lyon College in Batesville and some out-of-state colleges. The coach said Burton is “generating a lot of buzz on his own.”

Sophomore Owenn Marino made seven appearances last year and finished with an ERA of 4.29 with 9 earned runs, 16 strikeouts and 8 walks.

Sophomore Daniel Perry is “probably the most athletic kid that we have on the baseball team,” Davis said.

“He has a good strong first step and an accurate arm,” the coach said. “He does a good job of putting himself in a good position. He covers the ground well and is smart about where we are going with the ball. … He is a real blessing for us to have defensively.”

Perry, who also plays defensive back for the Searcy football team, was moved into a starting role last year around spring break.

“Once he got there in center field, the elevation of the defense was something that could not be ignored,” Davis said. “He naturally lifted up everybody around him and gave our pitchers a little bit more faith.”

Davis said one of the biggest games to watch this year is the team’s conference double-header against Jonesboro on May 5.

“We have a lot of returning pieces coming back from last year, not just from a solid group of juniors and seniors, but we have about five sophomores who saw significant playing time as freshmen,” Davis said.

“It is the most experienced and versatile lineup that we have had in about three or four years,” he said. “We are going to have to let the defense play solid to keep runs off the board, and we will also need to be smart at the plate in our pitch selection and not allow pitchers to dictate the at-bats,” Davis said.