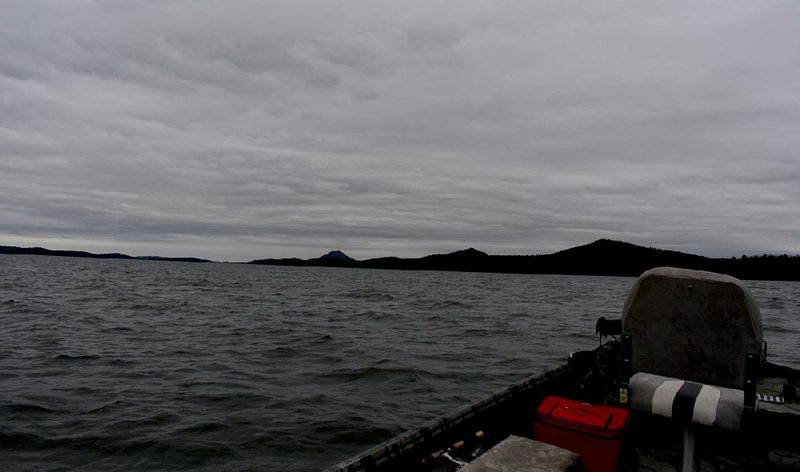 Lake Maumelle, with its view of western Pulaski County’s mountains cape, is a great place to practice social distancing at any time, but especially during the coronavirus outbreak. (Arkansas Democrat-Gazette/Bryan Hendricks)

Thursday on Lake Maumelle was a study in gray scale.

The color scheme matched the world's gray mood during the coronavirus fiasco, but Lake Maumelle was a fine place to practice some social distancing while enjoying some late winter Arkansas fishing.

On Wednesday, I told Miss Laura that while the neighbors were all outside grilling steaks and working in their yards, I was going to step out and scream, "I'm fed up, and I'm not gonna take it anymore!" Miss Laura feared that I might. I speculated that a couple of the neighbors would wait two days before calling her up to ask her about it.

In my neighborhood, a scene like that would rate only runner-up to the neighbor who was so infuriated with his balky lawnmower that he doused it with gasoline and set it aflame. The conflagration attracted the attention of his missus, who opened the back door to find her husband glowering beside the inferno with his arms crossed.

"I didn't say a word," she admitted later, shaking her head slowly.

Miss Laura decided to avert comparisons by dispatching me to the lake.

Apparently it's a consensus opinion that Lake Maumelle is a proper place for social distancing because the parking lot at Westrock Marina was packed. That's unusual for a cold, windy weekday afternoon, even when the white bass are running as they are now. That doesn't include all the anglers who launched their boats on Big Maumelle Creek on Highway 10 on the west side of Lake Maumelle.

At noon, a fair number of anglers were leaving the lake when I arrived because the fishing was poor. Larry Romine and Daniel Romine, fellow members of the Old Belfast Hunting Club, trailered their boat while I launched mine.

With that warning, I returned to my truck and donned a pair of light fly fishing waders and knee-high neoprene hunting boots. I wore a Simms fishing jacket over the top. Only my face was exposed, but the spray felt refreshing.

An October baby, I am a Libra, an air sign, but I am a child of the water. That is where I am happiest and where I feel most at home. My War Eagle 1542 is more than a boat, she is a friend. I've had her for 15 years, and I know exactly how she will react to every wave and every swell. I know exactly how she will launch from the crests and how long she will wallow in a trough digging in and clawing out. In calm water, I love the sound of water lapping against the aluminum hull. She's just one more thing that I love about fishing.

Against long rollers pushed by a hard northwest wind, it was a rough, wet pounding ride across the lake, but the sheltered areas on the north shore were as calm as an April morning. The water was very high, so I trolled far offshore on the outside edges of the grassbeds and retrieved a spinnerbait over the tops. I also tried a Bagley Killer "B" crankbait, but largemouth bass weren't interested.

White bass are in the middle of their annual spawning run up the river, so I looked to them to save the day. That also meant another long, wet, rough, pounding run against the wind up the lake. On the west side of the Highway 10 bridge, I caught a small largemouth bass just inside the bridge with a small Arkie curly-tail swimbait on a pink, 1/8-ounce ballhead jig. Still in winter trim, the bass was very pale and cold. 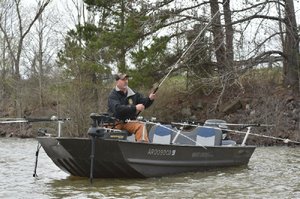 On the south side of the bay I chatted with Jim Maxwell of Benton, who was busy deploying an array of long crappie rods from his own War Eagle.

"There's a [brush] top out here with fish all over it, if I can get them to bite," Maxwell said.

Motoring slowly, I left the lake and entered Big Maumelle Creek, where I met three young anglers fishing for bass.

"You fishing for whites?" asked the driver. "The biggest bunch of them are up past the ramp. Nobody's catching much, but that's where they are."

The parking area at that ramp was full, and most of those anglers were concentrated in the skinny water upstream. The water was muddy and the current was very fast. Even though big white bass frequently rolled on the surface, they weren't biting.

"They're all in here spawning, and you'll see them scooting this way and that, but they're not hitting lures," said another angler fishing alone.

White bass didn't bite any of the hard lures I threw, so I went back to the Arkie swimbait. It is chartreuse on the top half and yellow on the lower half. I cast to the bank, started reeling slowly and felt the telltale strike of a white bass. It was a nice one, too, almost as wide as my boat seat.

I, too, saw white bass rolling on the surface, but those fish wouldn't strike. All of my fish hit on slow retrieves from the bank. My ratio was about one fish per 30 casts.

At 5 p.m., the light began to dim and I felt a change in the air pressure that told me the catching was finished. I motored slowly back down to the lake, idled under the bridge and followed the rollers back to the marina, delighting in the slap of Monticello aluminum against the angry gray water. 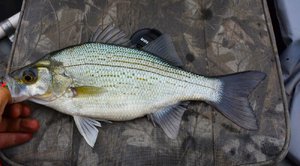 The author didn’t catch many white bass on Big Maumelle Creek, but the few he caught were worth the trip. (Arkansas Democrat-Gazette/Bryan Hendricks)
ADVERTISEMENT