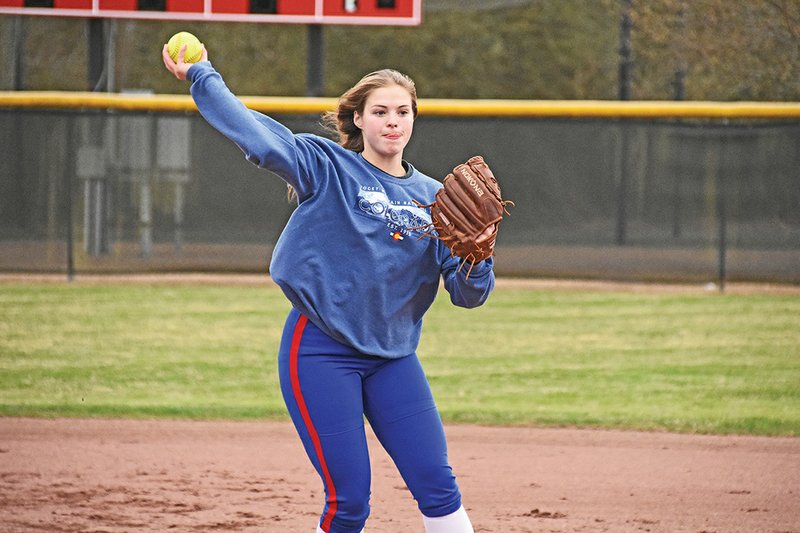 Beebe senior Hannah Gammill prepares to throw a ball toward first base. Gammill signed with the University of Arkansas in November. ( Staci Vandagriff)

The main goal for the Beebe Lady Badgers is to win a conference title and earn the No. 1 seed for the state tournament.

“If you get to state, anything can happen because softball is such a crazy sport,” head coach Eric Chambers said. “[Teams in our conference] are tough, and when we play them, we will have to play some of our best softball.

“Our nonconference schedule is packed tough again to try to help. We are playing Cabot and Sheridan and some other really tough schools to get us prepared.”

Beebe finished 22-7 last season, making it to the second round of the state tournament before losing to Sheridan.

“It was actually a really good game, but we made some errors in the field, and it kind of blew up,” Chambers said. “Sheridan is pretty good; they’ve won it four years in a row.”

Returning this year is senior Hannah Gammill, who signed with the University of Arkansas in November. She had a batting average of .500 in 2019 with 32 runs, 29 hits, 37 RBIs and 9 home runs.

“She is really athletic and is really good at any sport that she plays,” Chambers said. “She is strong and our power hitter. She has all the tools needed to be a good softball player.”

Chambers said senior Lexy Lockhart and junior Justine Burch are his two best defenders. Last year, Lockhart had a fielding percentage of .980, Chambers said, which means she made one error all season. Lockhart has committed to Arkansas State University.

“And as our catcher, she is touching the ball almost every play,” he said. “She does a good job and has a strong arm. She can block the ball really well. She is probably one of the better catchers that I have ever had.”

Burch, who has already signed with Harding University in Searcy, played right field last year as a sophomore, and Chambers said she was the team’s best outfielder.

“She did a good job on defense, but we might need to move her into the infield,” he said. “She hustles real well, and even though she is small, she gives it everything she’s got. … I think she can handle third base for us. She has a decent arm and has quick hands.”

“She has a really good curveball, and when she is spinning the ball, we are going to be all right,” Chambers said. “If she can hit her spots, she is going to do a good job.”

“We aren’t the best stealing team, but she is pretty quick,” Chambers said. “She is another good outfielder. She will go and dive and hit the fence. She is not afraid to get down and get dirty.”

“Hopefully, we have an experienced group that has been there before and will carry us through,” Chambers said.